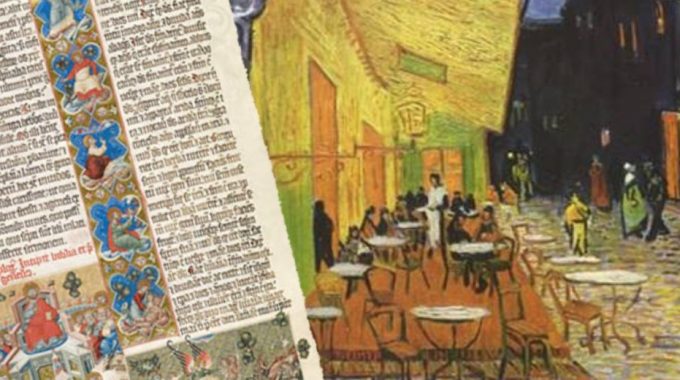 A visit to the Louvre in Paris, the Prado in Madrid, the Rijksmuseum in Amsterdam, the Hermitage in St Petersburg, the Uffizi in Florence or the Tate in London cannot be fully understood without some biblical knowledge.

Master artists like Leonardo da Vinci, Michelangelo, Caravaggio, Rubens and Rembrandt painted many works based on Bible stories. The creation, the flood, Babel, Abraham and Isaac, Moses and the exodus from Egypt are among the themes these and many other artists have painted. The teachings and actions of Jesus and his disciples have inspired countless canvases now in galleries around the world. Illustrated Bible manuscripts, such as the Book of Kells or the Lindisfarne Gospels which we have been encountering on our current Celtic Heritage Tour, are themselves among the greatest early medieval works of art.

The Rembrandt Bible is richly illustrated by paintings and sketches, some with contemporary political meanings lost on modern viewers. Van Gogh’s letters to brother Theo reveal biblical allusions such as the Last Supper in ‘Café Terrace at night’, (the server is a Christ figure, Judas the shadowy figure slipping away from the tables), twisted olive trees at St Remy depicting Gethsemene and his use of yellow to reflect the divine. Marc Chagall created a series of lithographs on the Bible, the greatest source of poetry of all time in his view. Contemporary art continues to draw on biblical images, as the famous graffitti artist Banksy illustrates with his Christ with shopping bags, a comment on the modern religion of consumerism.

As with art, western music also exudes the profound influence of the Bible. The Psalms and Jewish worship music directly inspired the liturgy of the early church and the emergence of Gregorian music in the Middle Ages. An eleventh-century Benedictine monk, Guido of Arezzo, invented musical notation using a four-line staff. This freed western music to develop with written scores, order, logic and rules.

Church music thus shaped the foundations for secular music. Gutenberg’s invention of the printing press enabled widespread distribution of the Bible and of musical scores. It helped spread Luther’s teachings and the Reformation in which music played a central role.

Two centuries later, Johann Sebastian Bach set much of Luther’s Bible translation to music, most notably the St Matthew Passion, often considered the greatest musical work ever composed. Bach is widely recognised as the father of classical music. The Baroque era of music climaxed in Bach’s work and laid the foundation for all music that followed. He profoundly influenced the works of others including Beethoven, Haydn, Mendelssohn, Mozart, Chopin, Wagner and Brahms. George Frederick Handel wrote the Messiah, the Christmas classic composed entirely of Bible passages put to music, which still continues to attract people of all faiths and none across Europe and globally.

Bible stories comforted and inspired Afro-American slaves, from whose ‘Spirituals’, like ‘Go down Moses’ and ‘Let my people go’, developed Gospel, Soul, Jazz and Rhythm&Blues.

How dull and boring western art and music would have been without the influence of the Bible!

The second theme of the question ‘Who speaks for Europe?’ tackled in the edition 33…

Northern Ireland has to be experienced to be believed. We've read about the "Troubles" for…