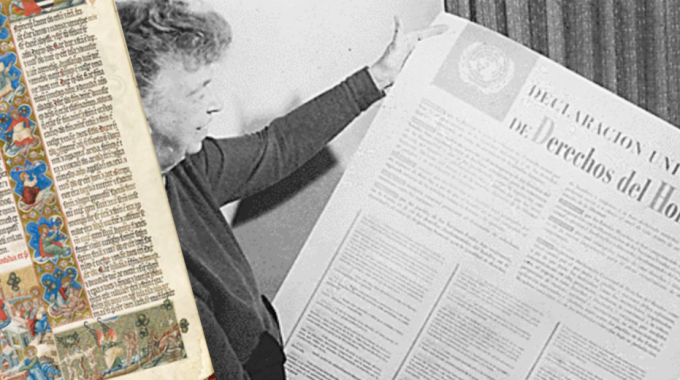 The motto of the French Revolution, ‘Liberté, égalité, fraternité’, is inscribed on official buildings all over France today. The popular impression is that these values evolved from the Enlightenment, as enshrined in the Declaration on the Rights of Man and Citizen.

More than a decade earlier, the American Declaration of Independence (1776) declared the ‘self-evident truth’ that ‘all men are created equal’. Yet Indian philosopher Vishal Mangalwadi asks that if equality was so self-evident, why does Hindu India hold to a caste system, with the Brahmin on top and the Untouchables on the bottom of the pile? And if a materialistic evolution postulates that humans are cosmic freaks, accidents of ‘slime plus time’, where is the basis for dignity or rights?

For nearly two centuries, the Roman Catholic Church considered human rights as part of a secularist agenda due to the strong anti-Catholic sentiment of the French Revolution. Today, churches and Christian action groups still find themselves opposing secular human rights groups campaigning for causes at odds with Christian convictions: the appeal to ‘non discrimination’ to promote same-sex marriage, or to ‘individual self determination’ concerning the ‘right’ to demand euthanasia.

Yet since Vatican II, the Roman Catholic Church has defended and promoted the cause of human rights. In fact, nowadays almost all Church denominations endorse the principles of human rights: for example, in the area of democratic civil rights, religious freedom, for the abolition of modern forms of slavery, against the trade of women in the sex industry and against discrimination of migrants.

Human rights are considered to be universal because they are derived from the notion of natural law, i.e. the moral law written in the hearts and minds of humans. Yet the idea that the Enlightenment took this notion from Greek and Roman philosophers is an incomplete picture of how human rights came about.

For two exclusively biblical concepts provide the necessary and sufficient foundations for human rights. The first is that humans are the deliberate creation of the Divine Designer, and reflect his image in some way, as described in the opening chapter of the Bible. The other, expounded in the New Testament, is that all humans share moral equality, or as Paul put it: ‘In Christ there is neither Jew nor gentile, male nor female.’

But the seed of the Gospel had to take root in Europe before the notion of natural law and the idea of the fundamental unity of mankind could develop. Paul related the idea of natural law to the Law of Moses: ‘Gentiles do by nature what the Law requires’ (Romans 1&2). Monotheism founded the idea of humanity as a united whole, inhabited by responsible and unique individuals, all created in the image of God. That implied all were equally entitled to the same rights and freedoms. For the American founding fathers, heirs of a long Biblical heritage, this was ‘self-evident truth’–but not for those outside the sphere of biblical influence.

Long before the American and French Revolutions, others had pleaded for freedom of conscience, worship and speech with arguments inspired by the Bible, including Erasmus, William of Orange and Thomas Helwys, founder of the Baptist movement.

Christians also played a decisive role in putting human rights on the agenda after the atrocities of World War Two galvanised world opinion behind both the Universal Declaration of Human Rights and the European Convention on Human Rights. Jacques Maritain, Charles Malik, Eleanor Roosevelt (pictured above), Robert Schuman and leading figures in the World Council of Churches thus helped shaped the modern context of human rights.

Time for one last Kuyper analysis before the centennial year of 2020 expires. None-too-early, a centenary Kuyper-magazine has just appeared in the Dutch shops, edited by Kuyper-specialist George Harink of the Free University.

Stop talking and listen for a minute

The first theme of the question 'Who speaks for Europe?' tackled in the edition 33…

Not only in Stockholm and Amsterdam, but also in London, thousands of Christians have…