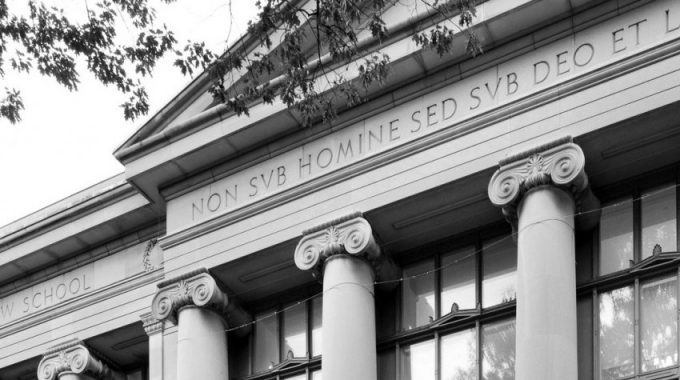 Students and professors of the Harvard Law School are reminded daily of the foundations of western law by the Latin words inscribed over the library entrance: Non sub homine sed sub deo et lege (Not under man but under God and law).

These words of Henry de Bracton, the 13th century English priest and judge, represent the culmination of a long process in the development of European legal thought, stretching back to the last period of the Roman Empire to the Justinian Code.

Compiled between AD 529 and 534, the code is often presented as a repackaging of ancient Roman law, adopted later by the Roman Catholic Church into its legal system. But can we assume the foundations for western law were essentially Roman?

In his forthcoming book, This Book Changed Everything, Indian philosopher Vishal Mangalwadi unravels what he calls ‘the modern myth of Rome as the source of law’. While the Roman Catholic Church indeed integrated the Justinian Corpus Juris Civilis (Body of Civil Law) into its legal system in the 11th and 12th centuries, the code was a synthesis of Roman civil law, Church’s canon law and Christian ethics. The Code, still the basis for civil law in many modern states, was commissioned and compiled, not in Rome, but in Constantinople (now Istanbul).

Justinian I was the Eastern Roman emperor (527-565) two centuries after Constantine ‘christianised’ the empire. Called Saint Justinian the Great by the Eastern Orthodox Church, he oversaw the building of the magnificent Hagia Sophia as an Orthodox cathedral.

Pre-christian Roman law did not guarantee the rule of law with equality for all. Jesus for example was crucified even after Pilate had found him innocent, following the wishes of the crowd. Felix imprisoned Paul for two years, hoping for a bribe. Caesar, the emperor-god, and his representatives were above the law.

Not so for Justinian. As with Constantine, he saw God as the ultimate authority to whom even emperors had to defer. Earlier, Ambrose, bishop of Milan (374-395), had excommunicated and demanded penance from Emperor Theodosius after he ordered a massacre of 7000 people in Greece. Even the emperor was ‘under God and law’.

A judicial system largely shaped by the Justinian Code was thus spread through the Church across Europe. While ‘secular’ in form, this christianised Roman civil and canon law was increasingly based on biblical concepts of the dignity and sanctity of humans, and of moral equality of all before God and under the law.

While centuries of both progress and regress would pass before the full implications of these biblical concepts would be realised, the basic foundations of western law had been laid as ‘under God and law’.

Milestones along the way towards individual rights and freedom of worship and conscience under God and law included the following:
• Charlemagne’s scrapping of the death penalty for paganism in 797 after the scholar-monk Alcuin persuaded him that ‘faith is a free act of the will, not a forced act. You can force people to be baptised, but you cannot force them to believe.’
• King Alfred’s long law code early in tenth century England which included the Ten Commandments, 66 verses from the Mosaic law and the Golden Rule of Jesus (Mt. 7:12).
• The Magna Carta, brokered between the king and his barons by the Archbishop of Canterbury, which established the principle of the king’s accountability, the right for due process, and the people’s allegiance to the king being contingent on his obedience to God’s law.

Natural law, the ‘common sense’ recognition of right and wrong recognised in classical thinking, was seen by Christian thinkers from Paul and Augustine through to Aquinas and Luther as being part of God’s created order. Yet as Calvin expounded in Geneva, natural law only pointed in the right direction. Corrupted human nature rendered natural law insufficient without acknowledgement of God. His laws against theft, murder, adultery and lying protected property, life, marriage and truth. Such laws built trust, peace, respect and flourishing of human life. Self-government under God meant less external government and restraint, he taught.

Calvin’s Geneva model influenced later legislators in Scotland, England, the Netherlands and the fledgling United States to view the role of government as upholding the God-given rights of the people.

What happens then when the ‘deo’ disappears from the Harvard motto and man-made law rules supreme? Luther, both a law student and theologian, warned: ‘Where there are no people who have been made wise through the Word and the laws, there bears, lions, goats and dogs hold public office and head the economy’.

From Jeff Fountain’s book Deeply Rooted. You can read the first part here. Monnet knew that…

Another Halloween/All Souls Day/Reformers Day has come and gone - and I'm puzzled! A front-page…

ww15mar2010.pdf If New Zealanders focussed on spiritual fitness as much as they do on physical…

Why do Russians celebrate Christmas on the 7th of January? And what do Muslims believe…