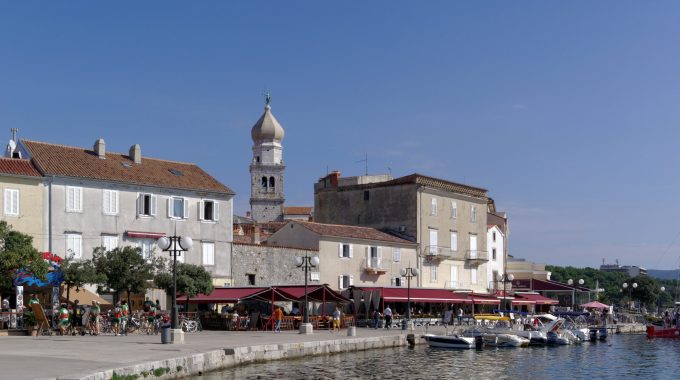 Christian missionaries did more than just bring the faith to the Slavic people. They also created the Glagolitic alphabet, which opened the way for the development of Slavic literature. Even if this script is no longer used, many early Glagolitic manuscripts have been preserved, thanks to some monks on a small island in Croatia.

For the fourth stage of a miniseries dedicated to Croatia, we will visit the main town of an island which is situated to the East of the Istrian peninsula. But before I mention the name of this town, I have to confess that it is probably the most difficult name to pronounce in all the stages of a European Journey so far. So, with all my apologies to my Croatian friends, this is it: Krk! (three consonants, K-R-K, and no vowel)!

More than six thousand inhabitants live in Krk. There are several mediaeval buildings, such as the city walls or the Frankopan Castle. And as we walk along the narrow streets in the old town, we discover numerous churches such as the St. Kvirin Cathedral, and also two former monasteries, of the Franciscan and of the Benedictine order respectively. And it is the Benedictine monastery that we will visit today.

The Benedictine monastery of Krk was dedicated to St. Lawrence. And it has, in fact, played a significant role in the conservation of early Slavic literature. But before I tell you more about this, we will first look into several factors in mediaeval history which influenced what happened here.

One influential factor was the schism between the Roman Catholic Church and the Eastern Orthodox Church. This division has had a huge influence in the Balkans. In Croatia, it has often created political instability.

The instability of Croatia was aggravated by other factors: the rise of new regional powers, namely Venice in the West and Hungary in the Northeast. These powers began to contest the status quo between the Byzantine Empire and the Holy Roman Empire in the Balkans (stage 58).

This is where the monastery of Krk enters into the picture.

The Benedictine movement arrived in Croatia probably around the time of Duke Trpimir of Croatia in the ninth century (stage 24). During the following centuries, the Benedictines founded several monasteries, mainly along the Croatian coast. The precise founding dates of most of them are unknown, which is also the case in Krk. Quite logically, these monasteries used the Glagolitic language and liturgy developed in Bohemia.

The island of Krk didn’t go through the same processes as the rest of Croatia. In the beginning of the 12th century, the Venetians had invaded the island. And so, even if Krk was under Catholic rule, from 1133 the island was practically independent under the rule of the Frankopan family, a rich Venetian aristocratic family whose castle is by the sea, near the Benedictine monastery. This unique political situation allowed the Benedictines to cultivate the Glagolitic language and liturgy freely. In 1252, the pope even published a special permission for the islanders to use the Glagolitic liturgy.

Even during the unstable Middle Ages in the Balkans, the island of Krk continued to enjoy peace and freedom. And so, even if the use of Glagolitic persisted in several other Benedictine monasteries in Croatia for some centuries, in Krk it was used until the 20th century. Thanks to this unique situation, the Benedictines in Krk succeeded in conserving several early Glagolitic manuscripts from Bohemia. The most famous of them is the Legend of Saint Wenceslaus, an account of the life of the 10th century Duke of Bohemia who was murdered for his faith.

The turbulent centuries in the Slavic lands could have totally wiped out the Glagolitic script. But thanks to the monks of Krk, this crucial element to the Slavic memory has survived to this day.