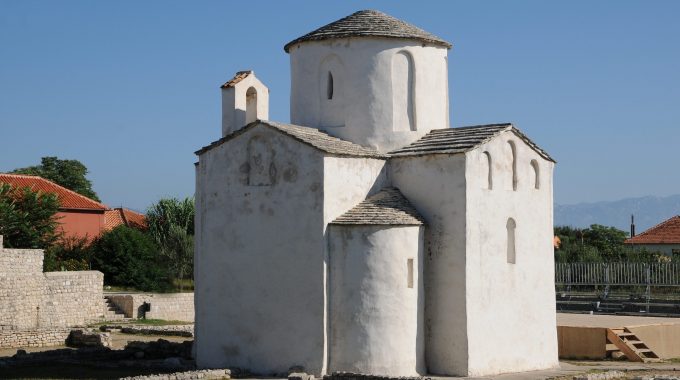 In the seventh century, several pagan tribes of Croats invaded the Christian Roman province of Dalmatia. And yet, less than two hundred years later, the region, which was then ruled by the Croats, was a Catholic Duchy. How did this happen?

To discover how the Croat rulers turned from paganism to Christianity, we will visit a town called Nin today. It is located in a lagoon by the Adriatic Sea in the central part of Dalmatia, 15 km North from the main city of the area, Zadar.

At first glance, Nin seems nothing more than a small village by the sea. However, the numerous archaeological sites reveal that this place used to be an important centre in ancient times. One of these sites lies less than a hundred metres from the town’s main church. There we discover an open area with the foundations of what seemed to be small homes. In the centre lies the only building still standing: a small church called the Church of the Holy Cross.

The church, which was built in the ninth century, is made of massive white walls that are typical of pre-Romanesque style. Because of its shape and size, this church has been nicknamed “the smallest cathedral of the world”. It is difficult to believe that this little town of less than three thousand inhabitants actually had a prominent role in the early centuries of Croatian presence in the area. For Nin was, in fact, the first capital of Croatia.

But before talking about the significance of this church, we will first need to look at the political landscape of the time.

When the Croats arrived in the 7thcentury, Nin had already existed for at least sixteen centuries and was called Nona. In pre-Roman times, the Liburnians, an Illyrian tribe, lived here. And the archaeological findings reveal that Nona used to be an important trading town with Greek merchants before and during Roman times. Nevertheless, Nona lost most of its importance during the invasions of the Croats.

When the Croats arrived in Dalmatia, the region was in a state of great instability, not only because of the Croats, but also because of other political developments in Europe. Dalmatia had previously been a Roman province under the control of Rome. But when the Western Roman Empire collapsed in the sixth century, Dalmatia entered into a period of instability. The Byzantine Empire began to expand its dominion in the region. And a century after the arrival of the Croats, the Franks expanded their dominion to reach the region where they fought the Byzantine Empire. Finally, the peace of Aachen set the border between the two Empires in the Southern part of Dalmatia. This area became a vassal state of the Frankish Empire, the Duchy of Croatia.

The political shifts that took place in these two centuries may look rather complicated. But how did these events affect the church in the region?

In a previous stage we already saw that Dalmatia had most probably been Christian since the second century at least. At the time of the arrival of the Croats, both Catholics and Byzantine Christians were present in the region, even though the latter were more concentrated in the coastal towns where many Greek merchants lived.

So how did the church succeed in influencing the Croat invaders to turn to Christianity?

The presence of both the Byzantine and the Catholic church in the region played a significant role in the evangelization of the Croats through the contacts they had with the Christians that were living mainly in the coastal towns. In addition to that, the Catholics continued to send missionaries there, mostly from the diocese of Aquileia, near modern-day Trieste in Italy.

In the city of Nin, we can find several traces of the conversion of the Croat rulers.

The first trace is on the lintel of the chapel door of the Church of the Holy Cross. There is an inscription in Latin which says: GODES[L]AV IUPPANO […] ISTO DOMO COSTRUXIT. Although we find little information about him, Godeslav was probably one of the first rulers of Croatia to live in Nin. And the inscription, saying that the Church was built under his rule, seems to indicate that he was one of the first Christian rulers of Croatia.

The second trace is in the red house behind the church yard. This house is the Museum of Nin Antiquities. Inside we find a replica of the baptismal font of Višeslav, one of Godeslav’s successors. Višeslav was, in fact, baptized in the Church of the Holy Cross. And amazingly, we can still admire the original baptismal in the city of Split.

It is very probable that there were also political reasons for Višeslav’s baptism, because it was during his reign that the Duchy of Croatia became a vassal state of the Holy Roman Empire. This new political situation allowed the Roman Catholic Church to have a firmer footing in the land. As a result, many more missionaries came to Nin, and the first capital of the Duchy of Croatia very probably became the first missionary base for the evangelization of the Croats.

It is interesting to realize that Nin, which had been destroyed earlier by the pagan Croats, finally became the first main centre of missions among them. What man had meant for evil, God turned for good.