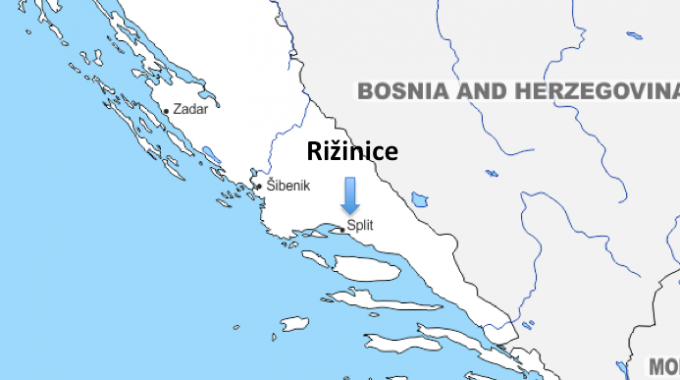 The Birth Certificate of Croatia

Today we travel to the Balkan Peninsula and in particular to the country of Croatia to explore how the Gospel took root among the Croats.

The location we are visiting is called Rižinice, in the Western region of Dalmatia near the Adriatic Sea. It is located a bit than 10 km East from the coastal city of Split. And this is an area that offers a gorgeous view on the surrounding mountains, the valley and the sea on the horizon.

Nowadays, the Klis fortress nearby has become quite famous. And the reason for this is that it is been recently used for some scenes in the famous American series Game of thrones.

Rižinice with its ruins of an ancient Benedictine monastery reveals the deep spiritual significance of this area.

This monastery is linked to a ninth century duke of Croatia called Trpimir I, who was actually also the owner of the fortress. The accounts of his life provide some of the earliest records of the Croats converting to Christianity.

But before talking about Trpimir, we need to take a step back and look at what happened earlier in Dalmatia. Christianity had already been present for some centuries in the land long before the arrival of the Croats.

What is today known as Croatia was actually part of the Roman Empire during the first centuries AD. The Bible itself tells us that the Gospel arrived in Dalmatia through Titus some decades after Jesus’ death and resurrection (see 2 Tim. 4:10). The persecutions under Diocletian at the beginning of the fourth century also affected Dalmatia, where the church was well-established.

After the fall of the Western Roman Empire, two waves of migration swept from the East into Europe. The first wave of Germanic tribes arrived in the sixth century. The second wave, which started nearly at the same time and lasted for more than two centuries, saw Slavic tribes settling in modern-day Eastern Germany, Poland, the Czech Republic, Slovakia, Ukraine and the Balkans. The Croats, probably originally from modern-day Russia, settled in Dalmatia.

Although there are accounts of the conversion of a seventh century ruler of the Croats called Porga, it is in the time of Trpimir that we find a clear record of the establishment of Christianity in what is now Croatia.

Just as the Jelling Stone is considered to be the birth certificate of Denmark (see stage 18), Croatia also has a document that could be considered its own birth certificate. This document was a charter written in Latin and issued by Trpimir himself. Although the original document has been lost, a sixteenth century copy is still kept in the parish archives of Kaštel Sućurac near the city of Split.

So why would I consider this document the birth certificate of Croatia?

It is simply because in this charter, Trpimir introduces himself in the following way: “By the mercy of God, duke of the Croats”. This introduction is foundational for Croatia not only because of its reference to Christianity but also because it is the earliest document in which we find the word ‘Croats’.

The charter mentions other fascinating facts, such as the duke’s intention to build a church and a monastery in his duchy. History shows that Trpimir respected his promise and built them right here in Rižinice.

What could have influenced Trpimir to build a monastery?

While we don’t have precise accounts about his life, we know through the Evangelistary of Cividale that Trpimir undertook a pilgrimage to this Northern Italian Benedictine monastery with his son. We also know that Trpimir hosted a famous Benedictine monk and theologian from Saxony, Gottschalk of Orbais, at his court for a while.

Through these two facts, we can infer that Trpimir must have been impacted by the strong influence the Benedictines had in society wherever they were, especially in shaping the education and the economic life. Could this be the reason why Trpimir invited the Benedictines to settle in his realm?

Whatever his reasons were, by the eleventh century there were more than forty Benedictine monasteries in Dalmatia. And the Benedictines did indeed bring a substantial contribution to the material, cultural and spiritual development of the Croats through the Middle Ages.

https://soundcloud.com/aeuropeanjourney/a-european-journey-89-enyd-elidius-isles-of-scilly-england There is a little desert island off the coast of Cornwall which, quite amazingly,…