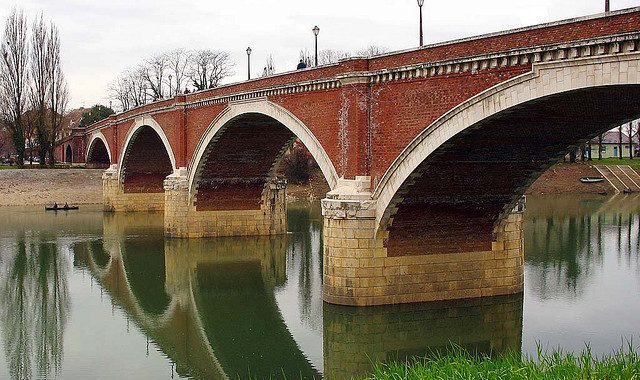 This is the fifth and last stage of a miniseries dedicated to Croatia. If we look carefully at all the places we have visited so far in this country, all of them were located in Dalmatia, near the Adriatic coast. But Croatia covers a much broader area, and there are still many regions we haven’t explored so far.

When we look for traces of early Christianity in Croatia, we find most of them in Dalmatia. However, a few traces can also be found in the North-Eastern part of the country. So today we will visit the town of Sisak where we find a historical account linked with early Christianity.

Sisak is the main town of the county of Sisak-Moslavina and is located in a relatively flat area, nearly 60 kilometres South East from Zagreb, and nearly 40 kilometres North West from the border with Bosnia-Herzegovina. It lies between two rivers, the Sava and the Kupa, the latter flowing into the former a few kilometres further South.

One of the main sights in Sisak is the bridge called Stari most(the Old Bridge). From this bridge, we will only need a short walk towards the city centre in order to discover an area with a white church on the right side of the road and a white building on the left. Both belong to the Roman Catholic diocese of Sisak. And if we walk towards the church, we discover the Archaeological park Siscia in situ.

So what is the story behind this place?

The Archaeological site reveals that Sisak has ancient origins. In Roman times it was called Siscia and it was one of the most important trade towns of Pannonia, an Imperial province covering parts of modern-day Slovakia, Austria, Slovenia, Hungary, Serbia, Bosnia and Herzegovina and also the North-Eastern part of Croatia.

Sisak is also of a particular interest for us because this is one of the rare places in North-Eastern Croatia where we can find traces of the early impact of the Gospel in the region. The early Christian testimony in this region is linked to a man named Quirinus.

So who was this man and how is he connected to Sisak?

In mediaeval times, there were several people named Quirinus in the Roman Catholic calendar of martyrs (the Martyrologium Hieronymiamum). However, the story related to Quirinus of Siscia is considered to be the most reliable. We find traces about him principally in two sources. The first is the Acts of the Martyrs, which were early writings reporting the persecution of several Christians in pagan Rome. The second source are the writings of Eusebius of Caesarea, a famous fourth century historian and theologian. And even though there are some differences between both reports, they are nevertheless relatively reliable.

Quirinus was a fourth century bishop of Siscia. He lived at the same time as Domnius of Salona whom we already met a few stages ago (stage 56). We don’t know where he came from, neither when he arrived in Siscia. And there is not much known about his life here either. Most of his story known to us is related to the persecution that he faced under the rule of Diocletian, just like Domnius in Salona.

Eusebius of Caesarea reports that after having tried to escape, Quirinus was arrested. When the authorities forced him to obey the imperial orders by offering sacrifice to the gods – which we might suppose included worshipping the emperor – the bishop of Siscia categorically refused. As a consequence Quirinus was scourged and put into prison where, according to Eusebius, he converted the jailer called Marcellus.

Three days later, the authorities sent Quirinus to the governor of Pannonia I in Savaria (today Szombathely in Hungary) to try to force him to change his mind. But Quirinus would not yield. Finally he was condemned to death, thrown into the Sava river with a stone attached to his neck. Later the Christians of Savaria recovered his body and buried him.

After Quirinus’ death, the fame of his martyrdom began to spread quickly among the Christians in the Empire. Several decades after his death, the Roman Christian poet Aurelius Prudentius Clemens wrote a poem in his honour. And a century later, when the Huns invaded Pannonia, his relics were transferred to a mausoleum in Rome.

Today the Roman trade town of Siscia where the persecution of Quirinus occurred is a ruin. In the place of the town, we now find a church and a building belonging to the bishopric of Sisak, of which Quirinus was one of its first bishops. Diocletian may have succeeded in killing Quirinus, but the Christian faith survived and became the cornerstone of Sisak and of Croatia, notwithstanding numerous wars and attempts of annihilation.

The history of Christianity in Croatia is a shining example of what Jesus meant when he said that the gates of hell would not prevail against his church.

https://soundcloud.com/aeuropeanjourney/a-european-journey-70-scy-chazelles-france In 1945, a war had devastated Europe once again. The continent was now in…

https://soundcloud.com/aeuropeanjourney/a-european-journey-38-constantinople-turkey Today we will continue our miniseries exploring the history of the Orthodox Church. Our…