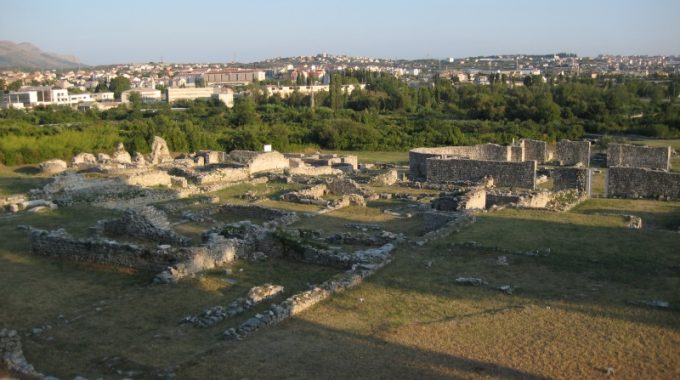 Croatia has become one of the most attractive touristic destinations in Europe in recent years. And yet the beauty of the land is in stark contrast to its history marked by frequent wars.

The conflicts of past centuries are perhaps the main reason that Croatia still has a lot of history to uncover. Yet in spite of the lack of detailed historical information, we will seek to discover how the Gospel spread in the land in the following five stages.

In the 7th century, a Slavic tribe called the Croats, who probably arrived from modern-day Central Russia, were among the numerous invaders in the land. Before their arrival, the land was a Roman province known as Dalmatia. It was a territory larger than modern-day Dalmatia, which is the south-western coastal region of Croatia. Ancient Dalmatia covered Bosnia Herzegovina, Montenegro, Kosovo, the coastal part of Croatia, the region of Serbia lying West of the Danube and a tiny portion of Northern Albania.

We already visited Croatia in an earlier stage. In fact, we visited the ruins of a monastery in a village calledRižinicein order to discover how the Croats had adopted Christianity (stage 24). For this stage, we will visit a location less than two kilometres from the ruins, near a town called Solin. If Rižinice helped us understand how the Croats adopted Christianity as a nation, Solin will reveal to us the existence of the earliest known Church in the land.

From the centre of Solin, we will take a dirt road called Put Salone, which runs between fields and a residential area. Six hundred metres further, we discover the ruins of an old Roman city called Salona. And if we continue another 150 metres, we discover another archaeological area, which used to be a cemetery called Manastirine.

Since the end of the nineteenth century, archaeological research has shed light on the history of the Roman province of Dalmatia, which was still relatively unknown before that. The earliest mention of Salona dates back to the 7th century BC. In Roman times, Salona was the capital of Dalmatia and had a population of 60 000 people.

But what can we learn here about the early church in Dalmatia?

First of all, the Bible contains two accounts of the Gospel being preached in Dalmatia in the first century. Shortly before his death, Paul wrote a letter to Timothy in which he mentioned that Titus, his former co-worker in missions, was then in Dalmatia (2 Timothy 4:10). Even Paul himself visited the region, as he wrote in his epistle to the Romans: “…from Jerusalem all the way to Illyricum (meaning Dalmatia), I have fully proclaimed the Gospel…” (Romans 15:19).

Although we don’t know if Paul or Titus passed through Salona, there is archaeological evidence that points to the existence of a church here in the second century. In fact, the Manastirine cemetery was probably founded by a Christian family of Salonitan aristocrats in the second century.

It would seem that the church of Salona continued to exist for several centuries in spite of persecution. In fact, the Roman Emperor known to be the fiercest persecutor of the Christians, Diocletian, had a strong connection with the city of Salona. He may even have been born there. This may explain why he ordered that a fortified palace be built for him near the sea, just outside the city. When Diocletian retired, he moved to this palace and spent the last years of his life there.

The Diocletianic persecutions took place throughout the Roman Empire. But as we can imagine, they were particularly violent in Diocletian’s town. Manastirine helps us understand what happened here.

In the nineteenth century, archaeologists found several tombs of martyrs in this cemetery. Among these was the tomb of the most famous martyr, Domnius, who was the Bishop of Salona. Although not much is known about his life, early texts seem to suggest that he preached the Gospel, baptised believers, defended the Christian faith among non-believers, healed the sick, ordained the priests and evangelised the region. However, soon after the persecutions began, Bishop Domnius and many other Salonitan Christians were executed, on the 11th of April 304.

The persecutions ended nearly ten years later with the Edict of Milan (313). They were, in fact, the last of a long series of persecutions in the Roman Empire. But what fault did the Roman rulers find with the Christians?

The pagan religion of the Roman Empire had elevated the emperor as the supreme god that all citizens and slaves had to worship. Obviously, Christians worshipped Jesus Christ instead, a man who claimed to be God. Moreover, the first of the Ten Commandments explicitly said “You shall have no other gods before me” (Exodus 20:3), meaning not even the emperor. The steadfastness of the Christians in spite of the numerous persecutions they faced finally led to a radical change in the Empire. Soon after Diocletian’s reign, Christianity became the official religion of the Empire and the Emperor was no longer worshipped as a god.

The church of Dalmatia continued to face hardships in the following centuries. The area was invaded by the Avars and shortly after by the Croats. During the sack of Salona, Christians found refuge in the fortress of Diocletian’s palace where the city of Split was founded later. Paradoxically, the house of the worst persecutor of the Christians had now become their haven.

See you next week somewhere in Europe.