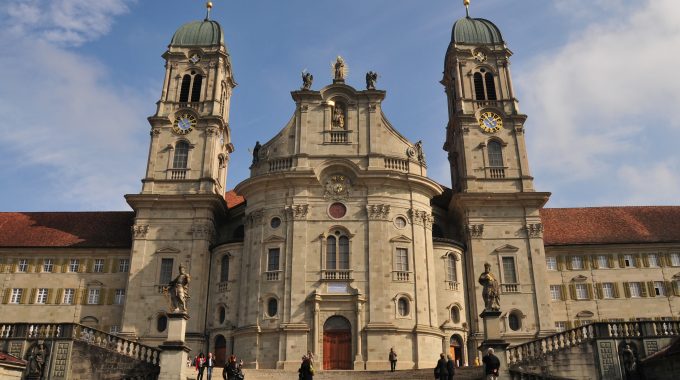 We are continuing our miniseries in the footsteps of Huldrych Zwingli who triggered the Swiss Reformation five hundred years ago.

Today, we will visit the small town of Einsiedeln. It is located in a hilly area of the canton of Schwyz, between Lake Zürich and Lake Lucerne.

Einsiedeln is best known for its Benedictine monastery which is located in the old town. And as we approach the entrance of the monastery, we might be surprised to discover a statue dedicated to the Virgin Mary. This place is, in fact, the most important Marian shrine of Switzerland.

At first glance, this seems to be a strange destination to continue our exploration of the Swiss Reformation. And yet, it is here that we find traces of Zwingli after he had left Glarus, the town where he had been a priest for ten years.

But before exploring his life here, we need to explain how this monastery came into existence and how it became one of the most important Marian shrines of Europe.

The story starts with a ninth century hermit named Meinrad. This man was born near Tübingen in Germany and came into the region to build a little cell for himself, where he could worship God alone as a hermit would do. Sadly, Meinrad was later murdered by outlaws and his cell stayed deserted for a long time. Then at the end of the tenth century, an abbey and a church dedicated to the Virgin Mary were built in this place. Some supernatural events occurred during the dedication. Because of this, Einsiedeln became one of the most important Medieval pilgrimage sites.

Zwingli, who was forced to flee Glarus after the French invasion, settled in this abbey and became priest of Einsiedeln in 1516. But why did he choose to come here?

Firstly, the administrator of the abbey, Theobald de Geroldseck, wanted to gather learned men here. Obviously Zwingli was an ideal option. Secondly, Einsiedeln was only a small village at the time. The quietness of the place would give him more time for prayer and study. And thirdly, since Einsiedeln was an important place of pilgrimage, many people from outside Switzerland visited it, and Zwingli considered this to be a wonderful opportunity to preach the Gospel to those people.

This time in Einsiedeln proved to be the turning point of Zwingli’s life.

Zwingli continued to spread his passion for learning the Word of God to the monks in Einsiedeln, as he had done in Glarus. De Geroldseck was himself impacted so much that he allowed the nuns of the convent to read the Bible in the vernacular.

The pilgrimages and the celebrations for the Virgin Mary that were taking place here began to show Zwingli the state of spiritual corruption that had crept into the Church. Soon he opposed the practice publicly by saying that:

“Think not that God is in this temple more than in any other part of creation. Wherever he has fixed your dwelling he encompasses you, and hears you as much as at our Lady at Einsiedeln. What power can there be in unprofitable works, weary pilgrimages, offerings, prayers to the Virgin and the Saints, to secure you the favour of God! What signify the multiplying words in prayer!… Christ, Christ, who offered himself on the cross once for all, is the sacrifice and victim which satisfies for all eternity, for the sins of all believers.”

This was a very courageous move from Zwingli, because the salaries of the monks in Einsiedeln were directly dependent on the gifts from the pilgrims. And Zwingli’s preaching inevitably caused many people to believe his message and thus to abandon pilgrimages. This, in turn, reduced their income.

Zwingli was also confronted with indulgences, which were documents sold by the Catholic church for the remission of sins.

One seller of indulgences, named Samson, came from Northern Italy to the Canton of Schwyz. He said to the people: “I am empowered to remit all sins. Heaven and earth are subject to my authority, and I dispose of Christ’s merits to whoever will purchase them, by bringing me their money for indulgence.”

This obviously provoked Zwingli’s indignation, and in response, he preached: “Christ, the Son of God, says, Come unto me all ye who labour and are heavy laden, and I will give you rest. What audacious folly and madness is it then to say, contradicting him: ‘Buy letters of indulgence, apply to Rome, give your money to the monks, sacrifices to the priests! If you do these things, I will absolve you from your sins.’ Christ is the one offering! Christ is the only sacrifice! Christ is the only way!”. People listened to Zwingli and Samson was forced to find another location for his business.

Zwingli also practiced charity by helping families who were in financial difficulties, although he didn’t believe that these good works had the power to save, as was commonly thought at the time. Rather he believed that it was God’s grace that created charity in the believer. He once said: “It is God who begets charity in the believer, and gives at once the first thought, the resolve and the work itself: it is God who does it by his own power.” This was a revolutionary way of thinking in his day.

Zwingli now had friends from various Swiss cantons. But it was through his closest friend, Oswald Myconius, that Zwingli was later appointed to a new role which triggered the Swiss Reformation. This is what we are going to look at in our next stage.

Denmark's birth certificate https://soundcloud.com/aeuropeanjourney/a-european-journey-18-jellingdenmark Today we are visiting the continental part of Denmark, that is…