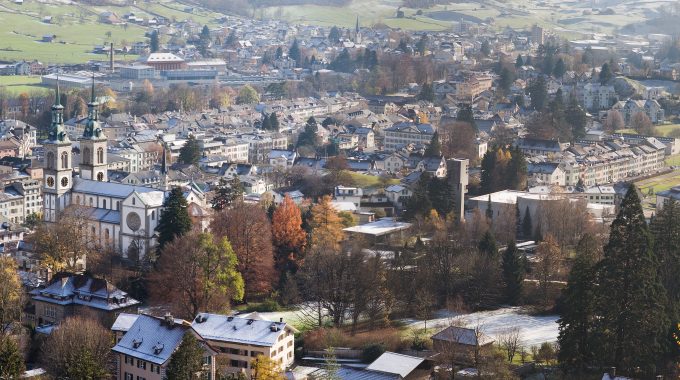 We’ll continue our miniseries exploring some of the key elements that led to the start of the Swiss Reformation in 1519. We will be looking into the life of one of its key leaders, Huldrych Zwingli, in particular. In our last episode, we explored his childhood and discovered his passion for learning.

So today we’ll go to the city where he exercised his priesthood, which is Glarus. This is a city of a little over 10,000 inhabitants, 40 km southwest from Zwingli’s birthplace, Wildhaus. It is located in the Linth valley and is surrounded by high mountains.

The ideal place to visit should be the church where Zwingli was priest. But sadly, most of the city’s medieval heritage was lost during a fire in 1861, and the old medieval church didn’t escape the flames. So for this stage we are going to the church that was built on the same site just after the fire. It is called the City Church (Stadtkirche) and is built in neo-Romanesque style, which was typical for the time. Here, the memory of the Swiss Reformer is well kept. For example, a street next to the church is simply named Zwinglistrasse.

Zwingli was priest here in Glarus for a period of ten years, between 1506 and 1516. As we can guess, these years were deeply influential in shaping his life. So what turned this highly educated catholic priest into the man who triggered the Swiss Reformation?

Firstly, let’s look at his personal life. How did he live as a priest?

From what we know, Zwingli’s ministry didn’t stop him from continuing his studies. He was, in fact, committed to what we could call lifelong learning today. His fame had even attracted the attention of pope Julius II himself, who granted him a yearly bursary that Zwingli used to buy new books.

But Zwingli’s primary concern was to learn the Word of God. He resolved to study Greek in order to understand the Gospel directly in the original language. “No one but God shall call me off from that duty” he once wrote to his friend, reformer Joachim Vadian. Zwingli regularly prayed God to receive His wisdom, as he knew that only the Holy Spirit could allow him to understand the Word of God properly.

Zwingli was not limited to reading and learning the Bible. He also read the writings of the church fathers. He didn’t consider them as ultimate authorities though, but rather, as he said, “just as we ask a friend, ‘how do you understand this?’” Zwingli also continued to study classical works, such as Cicero, Homer or Demosthenes, to name but a few.

Secondly, how did he approach his role of priest?

Zwingli wanted to teach what he learned to his congregation and to transmit his passion for learning. We can measure the extent of his influence through a letter to Zwingli written by a member of his church (Valentin Tschudi) who was then studying at the prestigious University of Paris. He wrote: “You have offered me not only your books, but yourself. I have never met anyone who explains the classics with so much justness of thought, and depth of understanding, as yourself.” Tschudi also realised the difference of atmosphere at the university of Paris, about which he wrote:“In what trifling do they educate the youth of France! No poison can equal the sophistical art they are trained in. It dulls the faculties, destroys the judgments and reduces to the level of the brutes.”

Thirdly, Zwingli also became strongly involved in the politics of his day.

At the time, Western Europe saw the rise of the Kingdom of France, which began to challenge the domination of the Roman Catholic Church. In the beginning of the sixteenth century, the contentious situation between France and Rome turned into several military conflicts in Northern Italy. A Swiss prelate named Matthaüs Schiner, who later became cardinal, succeeded in gathering the Swiss cantons to fight for Rome.

Zwingli was initially supportive of these wars. After all, he was a Roman Catholic and a strong defender of the Roman Church himself. Many people from Glarus were enrolled in the Swiss army. And sometimes, Zwingli went with them as a chaplain. But these wars began to open his eyes to the corrupted state of the Church, the earthly authorities and even his own people.

After one of the first battles, Zwingli saw with horror how the returning soldiers had become immoral and licentious. It was at that time that he wrote a poem called ‘The Labyrinth’ (1510) in which he denounced the corruption and stated that the core issue behind these struggles was sin.

Then, on the 8th of September 1515, the Swiss Confederates lost a crucial battle against France in Marignano (today Melegnano, near Milan). Zwingli saw the miseries that the war caused his people. He became convinced that the only hope for a better future was to preach the Word of God with clarity. In other words, the Swiss Reformation was now just behind the corner.

The situation in Glarus grew unstable after the Battle of Marignano. In 1516, the French army, thirsty for revenge, invaded the Swiss Confederation, including Glarus. Huldrych Zwingli was forced to flee and resettle in a lonely area near Lake Zürich, that we will visit in a future episode.