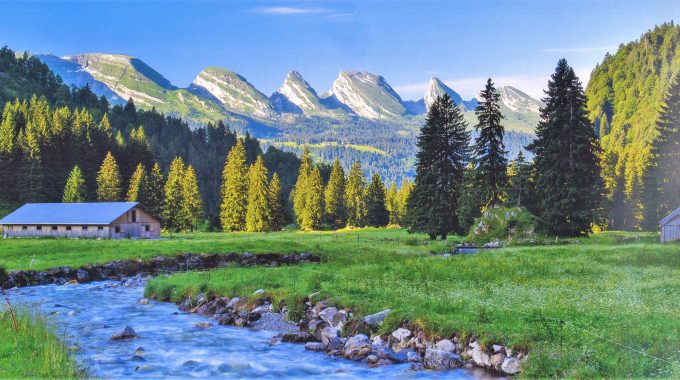 The year 2019 is the 500th anniversary of the beginning of the Swiss Reformation, which took place two years after Martin Luther nailed his Ninety-Five Theses in Wittenberg (Germany).

While both reformations were similar in their content, they began separately and also took different shapes. So, in this episode, we are starting a new miniseries in which we will retrace some of the key elements that shaped the Swiss Reformation.

For this first stage, we will travel to the canton of St. Gallen (East Switzerland), to a village called Wildhaus. This village is perched high in the mountains at 1000 meters above sea level. It lies on top of the Wildhaus Pass connecting the Toggenburg Valley and Lake Zürich (in the West) with the Rhine river and the Principality of Liechtenstein (in the East). So, if you intend to come here by bike, you’ll have to climb a mountain pass.

The scenery here is breath-taking, similar to that of the famous children’s story Heidi. To the North there is Mount Säntis with its peak of 2500 m separating the canton of St. Gallen from the cantons of Appenzell. To the South, there is a quite unique mountain with seven peaks above 2000 m called the Churfirsten.

If we climb the Western side of the Wildhaus Pass, we will turn right less than a kilometre before the top. There, near the main road, we will find a 15th century wooden chalet, which is now a museum owned by the Evangelical Church of St. Gallen. It is actually dedicated to the person I want introduce in this episode: Huldrych Zwingli, the man who triggered the Reformation in Switzerland.

So today we will explore his early life and try to understand what made him the leading figure of the Swiss Reformation.

The reason we find a museum dedicated to Zwingli in such a small mountain village is that this is where he was actually born on New Years’ Day of 1484. Huldrych was the third of nine children in a family of farmers. The Zwinglis were a well-respected family in the region. Huldrych’s uncle Bartholomew Zwingli was the regional dean of the Catholic church in Weesen, just South of the Churfirsten. And his father was the bailiff of Wildhaus.

Huldrych Zwingli grew up in a pious family. At a very young age, he worked as a shepherd boy with his father, spending his summers in the mountains. Zwingli was exposed to the Bible stories that his grandmother told him. And the family quickly noticed his extraordinary intellectual capacities.

His uncle priest Bartholomew provided him with a private tutor. But his intellectual level soon pushed his father and uncle to send him to a boarding school in Basel, a city that was renowned for its level of education. Zwingli also joined in discussions with scholars from the university. His understanding and answers soon provoked jealousy even from his senior peers.

In 1497, Zwingli moved to Bern to study classical literature under the well-known scholar and poet Heinrich Lupulus. Then a year later, Zwingli enrolled at the University of Vienna – aged only 14! – where he studied alongside another future Swiss reformer, Joachim Vadian.

Zwingli graduated at the early age of 18 and returned to his birthplace. But as we can imagine, he soon felt limited there. Later on in the year, Zwingli thus returned to Basel where we became a school teacher and also began new studies at the Faculty of Theology. During his studies, he met another future reformer who later became influential in Strasbourg, Wolfgang Capito. His studies in theology didn’t meet his expectations, however. Later on, Zwingli declared that ‘it was mere lost time’.

Nevertheless, his time in Basel turned out to be the defining moment of his life. During his studies, a man from the nearby town of Biel named Thomas Wyttenbach arrived in the city. He was an educated man and knew the Scriptures. Many students came to listen to his lectures.

Once Wyttenbach declared: “The time is not far distant when the scholastic theology will be abolished, and the primitive teaching of the Church restored.”Then he continued by saying: “The death of Christ is the only ransom to our souls.” These words were so different from anything Zwingli had ever heard. This was the Gospel, the gift of the death of Christ as a ransom for his soul and it reached his heart, transforming his life forever.

Huldrych Zwingli was now a highly educated man with a heart transformed by the power of the Gospel. It was this combination of education and faith, common to all reformers, that turned Zwingli into the man that triggered the Swiss Reformation.

Just after finishing his Master of Arts, the Archbishop of Constance consecrated Zwingli as priest of Glaris at the request of the parishioners of the village. This practice, similar to the principle of direct democracy applied in Switzerland today, was already common there even before the Reformation.

In the sermon that changed Zwingli’s life, Wyttenbach predicted a return to the primitive teaching of the church. Little did he know that one of his listeners was to become highly instrumental in this.

This is what we will continue exploring in our next stages.

See you next somewhere else in Europe.