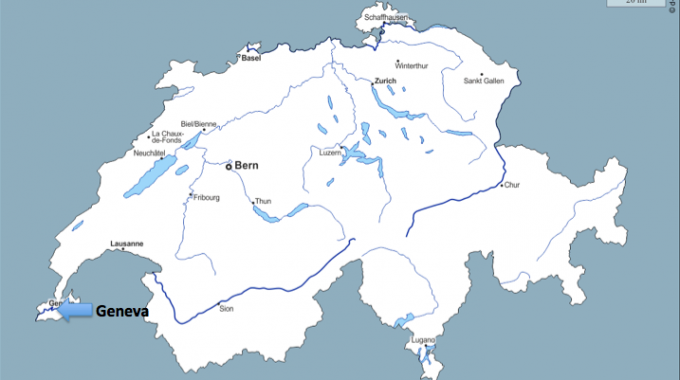 Last week we started our European journey near Rome in Italy. Today we are travelling nearly 1000 km north. We will cross the Alps to the Western shore of Lake Leman and end up in Geneva, Switzerland.

Geneva is an obvious destination for knowing what God has done during the past 2000 years. We could talk about the Reformation (Calvin, Farel or Beza), about the Red Cross (Dunant), and many other facts.

But for this first stop in Geneva, I won’t talk about any of that. I won’t even talk about the Catholic era. Instead we are going to have a look at the pre-Christian Geneva (before the 2ndcentury). And for this reason, we are going to visit the Jardin anglais (English garden) – in which lies the horloge fleurie (floral clock). Located right at the shore of the lake,we can see the boats at the harbour and the Jet d’eau (water jet), the symbol of the city. But for our purpose we are going to pause over two little rocks in the lake, the Pierres du Niton (Niton’s rocks).

These rocks are significant for several reasons. First of all, they serve as the reference point for the Swiss national height network (i.e. each Swiss elevation is measured from that point). In pre-Christian Roman times it is believed that pagan sacrifices were offered there. Several clues seem to confirm this: firstly the name Nitonis probably derived from Neptune, the pagan god of freshwater and the sea. Secondly, some 17thcentury fishermen discovered two little axes and a copper knife at the foot of the rock. These were used to kill animals for the sacrifices.

The Pierres du Nitoncould also serve as two other reference points useful. The first is historical. If we want to understand what God has done in Europe through the Gospel, it would be useful to try to picture what Europe looked like before it arrived. Like everywhere else in Europe, pagan gods were worshipped in Geneva. These were usually elements of nature. Why did they worship these things?

There is no simple answer to this. However one fact is worth to remember. Pre-Christian Europeans were more directly dependent on nature than we are. Natural disasters could prove more fatal to them than to us today. Because they feared gods in nature, they tried to appease them through animals – and also sometimes human – sacrifices.

Within a few centuries Christianity uprooted paganism almost completely from Europe. How did it succeed? A modern answer to this has often been ‘coercion’. While this was true in some cases, a great deal of conversions in Europe resulted from a genuine attraction towards the Gospel.

In the Bible we read that God condemned human sacrifices. He said explicitly that it didn’t even enter into his mind (Jeremiah 32:35). The Gospel presents a God who is love. It explains that humanity is separated from Him because of sin. The pagan gods were angry for unknown reasons but the God of the Bible was angry for one specific reason: the ungodliness of mankind (Romans 1:18). Nevertheless the Gospel offers a way to escape his wrath. And here is the astounding difference: this God doesn’t require sacrifices; instead He sacrificed his own Son to redeem humanity from sin once and for all!

The Gospel also told Europeans that God had created everything, including nature. People were created to have dominion – or be stewards – over nature. As long as they worshipped nature, they could not control it. When they shifted from worshipping nature to worshipping the Creator, they were liberated. This opened the way for future developments of all spheres of life in Europe. Let me take two examples: the first is that Europe slowly moved from dictature (Rome) to what we would call democracy. The second is the development of modern science which is based on a Christian understanding of the universe.

With this in mind we can see how these rocks are also a spiritual reference point. In the past, pagan sacrifices were made there. This is no longer the case today. Today there are two concrete examples of this in the city: the first is the seat of the United Nations (an example of democracy); and the second is the European organisation for nuclear research – CERN (an example ofscience). Without the spiritual shift that Christianity brought, those developments would probably have never taken place.

See you next week somewhere else in Europe!