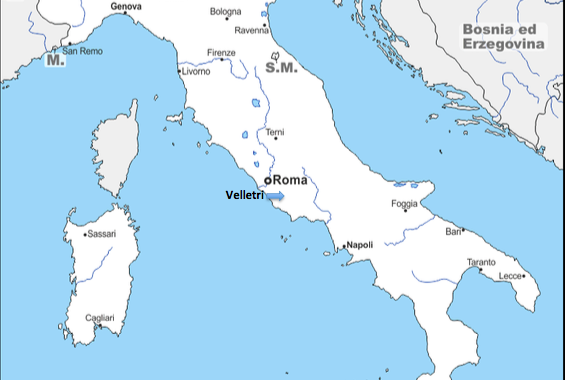 This is the first stage of A European Journey. As the title suggests, we are going on a journey of discovery across Europe. But you might be wondering what the purpose is or what we are looking for. Well, let me invite you to a highly symbolic place which, I find, can best explain our purpose.

The first stage of our journey is in Italy, in the region of Latium, where Rome is located. We will begin near a little town called Velletri, 40 km (25 mi) South-East of the eternal city. It is beautifully located on the southern slopes of the old volcanic mountains Colli Albani, near Castel Gandolfowhere the pope of the Roman Catholic church also has his summer residence.

Velletri has much to offer in tourism: many medieval churches, rustic narrow streets in the old town, the old Porta Napoletana or the archeological museum, to name but a few. We could also mention that the 12th century’s pope Lucius III lived part of his tumultuous papacy in exile here.

But for our first stage we are going 5 km south (3 mi) from the old town, along the road called Via dei Cinque Architowards Nettuno.This is a beautiful road going down towards the Tyrrhenian sea through gentle hills of olive trees and country homes.

Then we arrive at a crossroads. On the left is a narrow road disappearing among olive trees. It seems to be used by local farmers only. At the corner is an elementary school. If we look carefully, we can see a commemorative plate on the wall of the building. On it is the engraving of a prisoner walking on a road in chains. Next to it there is a text which says:

On the two thousand years of the birth of Paul

In memory of his passage

on this section of the Appia Antica

headed towards Rome in chains

to witness with his blood

about his Faith in Christ

The root and foundation of our civilization

So here we are! The tiny road is actually the Appian Way, the symbol of the mighty Roman Empire. The Romans called it the queen of roads. Rome had built the Appian Way for military purposes so that it would enable them to control the South of Italy and eventually the entire Mediterranean sea.

The engraving on the school wall depicts a fact that happened in 61 AD. Paul, a Jewish Roman citizen, had once been a persecutor of the Christians but then he had had a miraculous encounter with the Holy God that left him blind for three days. This was when he was on the road to Damascus with the intention of arresting Christians. Here near Velletri Paul was again travelling, but this time in chains because of the same faith. He would eventually be martyred – most probably in Rome.

Today, nearly 2000 years later, the plaque declares that what Paul carried, i.e. Faith in Christ, has become the root and the foundation of our civilization. How can it be, that this faith – which seemed to be the cause of much persecution and which now seemed to have turned Paul into a weak prisoner – finally triumphed over the mighty Roman Empire?

This school is a striking symbol of the transformation that Europe has undergone in the past 2000 years.  Today the Via Appia, once the symbol of Rome’s might, is now a narrow country road. Instead of a military highway, we find a vibrant school. Where once military troops marched by, today children play and learn.

What was it that transformed Europe from a cruel Empire into a free society in which education has become available to all, rich and poor alike? This transformation finds its roots in the very gospel that Paul brought in chains.

Today, Europe has become a post-Christian continent. And sadly we don’t know the truth about our own past. Truth is no longer considered absolute, and our knowledge of history is greatly suffering from this.

This is the reason we are beginning our European journey, and this question will be our guide: “What has God done in Europe throughout the past?”

Recovering the knowledge of our past will, I believe, help us find faith for the future of our continent.

And why do we start right here in the countryside of Velletri? Well because that’s more or less where the book of Acts in the Bible, the last Biblical book of history, ends. This is a perfect place to start exploring our past and find the missing links between Paul’s Europe and ours.

See you next week somewhere else in Europe!