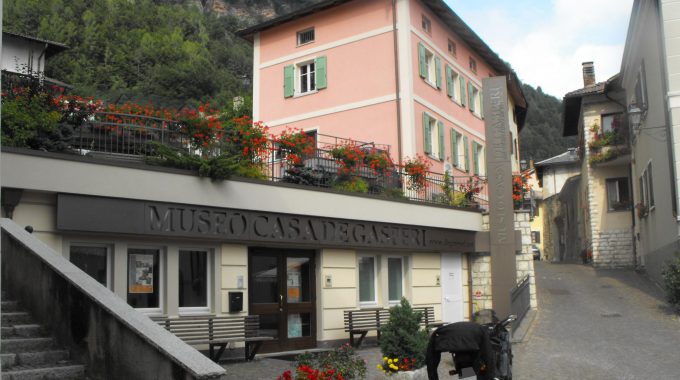 Alcide de Gasperi is known to be the man of the Italian resurrection after the Second World War. The key to his success was his understanding that democracy could only be rooted in Christianity.

For this third stage of a miniseries exploring the Christian roots of the European Union, we will visit Pieve Tesino, in the Italian region of Trentino. It is a small village of 6000 inhabitants located in the Dolomites, nearly 40 km away from Trento.

From the provincial road, a narrow street goes up to a small square. There we discover a pink house which became a museum in honour of Alcide De Gasperi in 2011. On the façade of the house, there is a plaque which reads:

In this house, in the midst of this people devoted to the patient toils of the mountain, was born Alcide De Gasperi, on the 3rd of April 1881. From the Trentino valleys, acted for Italy and for Europe with faith in God and by it, in freedom.

De Gasperi’s native house is a perfect place to explore five significant periods of his political career that will help us understand how he lived out his faith in the public square.But before we look into his political career, we must understand the context in which he was born. His region, Trentino, was part of the Habsburg Empire. In the 19th century, the imperial authorities began to centralise power in Vienna. Alcide De Gasperi grew in an Italian-speaking minority, which felt more and more oppressed by the regime. As a young adult, he went to study philology in Vienna and Innsbruck. De Gasperi who was a perfect bilingual, became a journalist for an Italian-speaking newspaper in Trentino and also for a German-speaking Catholic newspaper in Vienna.

So let’s explore the five main periods of his career.

Firstly, Alcide De Gasperi believed in the values of democracy from his youth. The encyclical Rerum Novarum, which was a Christian response to the rise of capitalism and socialism, had been published in his childhood. This publication from pope Leo XIII convinced Alcide De Gasperi that the future could only be built in a democracy rooted in the Christian faith. When he became general secretary of the Popular Party of Trentino, De Gasperi wrote: This democratic spirit that animates us is not a concession of current tendencies but a fruit of Christianity, socially understood, practiced from the inside out of man, in all public life. Later he represented the Italian community of Trentino at the Parliament in Vienna. During World War I, when Austria organised the mass deportation of Italian civilians to concentration camps, Alcide De Gasperi tried to convince the government to free his people, but in vain.

Secondly, Alcide De Gasperi was a key person behind the creation of a Catholic political party just after Trentino was joined to Italy. Based on the Catholic social doctrine formulated in Rerum Novarum, the Roman Catholic Church sought to shape the future of Italy upon democratic principles. After a successful election campaign, Alcide De Gasperi became the parliamentary leader of the party in 1921. But his political success was suddenly thwarted with the rise of fascism.

This leads us to the third period of Alcide De Gasperi’s career. In 1922, Benito Mussolini took control of the country and five years later De Gasperi, who was one of the strongest opponents to the regime, was imprisoned without any grounds. After his release sixteen months later, he obtained a job at the Vatican Library. As he had already realised that the fascist regime would not last, he used this time to reflect, study and prepare the future of Italy once the regime would collapse. His expectations became reality when Mussolini’s decision to be allied with the Nazis during World War II proved fatal for the regime.

Fourthly, Alcide De Gasperi was the key leader behind the reconstruction of Italy. In 1943 when the US troops liberated the south of Italy, De Gasperi became a member of the National Liberation Committee, which gathered the leaders of the parties that had been banished by the fascists. After the end of the war, De Gasperi was chosen to be the Prime Minister. In a time of huge instability, he succeeded in maintaining a necessary unity among the key leaders of Italian politics, and thus rebuilding the institutions and the economy.

One of the highlights of his career occurred when he spoke during the conference of Paris in 1947. This was when the Allies decided the sanctions to impose on the defeated nations. Although he had suffered greatly at the hands of the fascists, De Gasperi was now apologising for the crimes committed by his nation. He didn’t succeed in reducing the sanctions for his country. Nevertheless, his speech convinced the Allies that De Gasperi could be a trusted partner for the future. And as a result, Italy received crucial economic aid, particularly from the United States.

The fifth and last period of his life was dedicated to the European project. Alcide De Gasperi, who shared the same faith with Konrad Adenauer and Robert Schuman, worked to rebuild Europe upon the Christian values of liberty, justice and peace. Alcide De Gasperi served for a short period as President of the European Assembly (later the European Parliament) before retiring from public life in 1954.

The faith of Alcide De Gasperi had marked his political career with a rare integrity and courage. Quite appropriately, a few months after his retirement, De Gasperi pronounced his last words: ‘Gesù! Gesù!’

https://soundcloud.com/aeuropeanjourney/a-european-journey-55-kiev-ukraine The powerful and the wealthy played a significant role in Christianizing the Eastern Slavic…