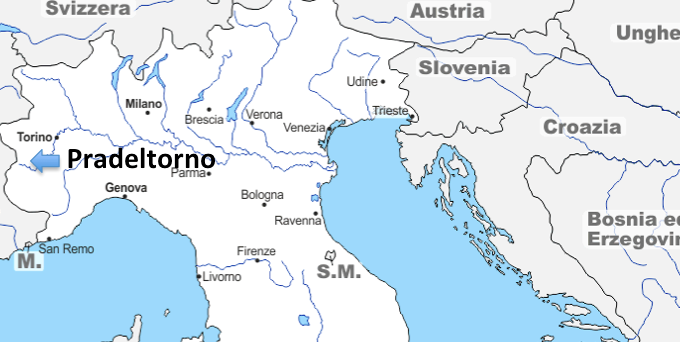 This is our fifth and last stage in the footsteps of the Waldensians. And today we will remain in Italy and visit a hamlet called Pradeltorno. Here we will discover the place, which has been the heart of the Waldensian church since the thirteenth century and the unique system of governance which they developed from the Bible.

You might not find this place on a map. We are, in fact, in the Italian region of Piedmont, about 50 km west from its capital Turin. The hamlet is located in the heart of the Italian Alps, just above the Pellice Valley. Starting from the town of Bobbio Pellice we must climb a narrow mountain road for ten kilometres, with typical hairpin turns to reach Pradeltorno.

Here we are in the area nicknamed Israel of the Alps, or simply the Waldensian Valleys, a place where the Waldensians have been present for at least eight hundred years.

Pradeltorno has only a handful of inhabitants. But there is a church, and unsurprisingly, it is Waldensian. From the hamlet, the road keeps climbing and then becomes a footpath, which leads us to a very old stone house called Coulege dei Barba.

This strange name comes from the Romance language. It means ‘the college of the Barbs’, and ‘Barb’ is the romance word for ‘uncle’. These uncles were, in fact, heads of extended families, and their roles were similar to the heads of families in ancient Israel. They were not necessarily married and lived a life dedicated to the conversion of the lost ones, through prayer, fasting and preaching.

So what where the circumstances that led them here?

As we saw in previous episodes, the thirteenth century was a time of great persecution for the Waldensians in France. This led many of them to cross the Alps in search of refuge. The first refugees probably crossed the Col de Montgenèvre, which is today the border between France and Italy. From there they continued to Pragelato, where a local Count called Gui de Vienne gave them land.

But Pragelato quickly became too small for the huge number of refugees fleeing death. So some refugees crossed over the steep mountains to settle in adjacent valleys in the South, such as the Pellice Valley were we are today.

These steep mountains and narrow valleys formed a very real protection for the Waldensians. But the idyllic green tops and pine forests in the valleys were also a challenge for their survival, which they overcame by learning how to make the land fruitful. They also discovered that the ground was especially suitable for chestnut trees. And today, the Piedmont chestnuts are a regional specialty.

The Waldensians did not live secluded here. This College of the Barbs served as a training centre for the Waldensians, where they could learn to read the Sacred Scriptures and out of which they were sent to the South of Italy, to Germany, the Czech Republic, Hungary, Poland, Bulgaria, Turkey and even Israel and Egypt.

They were usually sent in pairs, and went from home to home distributing the Scriptures to people who were receptive to their message. They also built villages of which we can still find traces in the Southern Italian regions of Calabria, Campania and Puglia, for example.

The role of the Barbs reveals how the Waldensians were organised as a community. Since they were free from external rule, the Waldensians actually lived here much like an independent nation.

What did this look like in practice? The Waldensians didn’t choose an autocratic ruler, neither did they create a modern-day democracy resting on each individual’s right to vote. Instead, they were governed by the Barbs, who were the heads of families. Since the Waldensians emphasized obedience to God, the Barbs themselves had to obey the Biblical command to love their families. And because the Waldensians emphasized working for each other, they had to be committed to the common good of all the families.

During these last five stages of A European Journey, we have seen a glimpse of the impact that the Waldensians had in pre-Reformation Europe. Although the places we have visited are not the only ones I could have mentioned, we have discovered how they lived out their faith and how they were committed to obeying God whatever the cost. We have also seen how their commitment to spread the Scriptures helped trigger later Reformations. Their lifestyle made them forerunners of universal education, Protestant work ethics, freedom of conscience and governance by the people, to name but a few.

Our modern nations are crumbling under the weight of individualism. In this context, perhaps the Waldensian model can show us the way forward. What impact could the Church have today if we sought to spread God’s Word and to live Biblically-inspired lives as communities?

https://soundcloud.com/aeuropeanjourney/a-european-journey-86-haugesund-norway “Ja, vi elsker dette landet”, “Yes, we love this country”! This is the way the…

https://soundcloud.com/aeuropeanjourney/a-european-journey-71-tarragona-spain Christianity in Spain is often associated with the bloodshed of the Inquisition. While this…