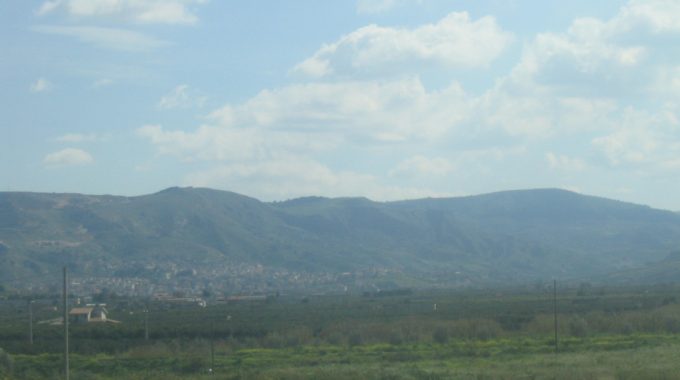 In the fifth century, various tribes invaded Western Europe and brought the Western Roman Empire to an end. In the meantime, a Christian movement began to emerge at the margins of Europe. Later on it became the leading force for the reconstruction of the West. The movement I am referring to is… monasticism.

So today we will start a series where we visit places that will show us how Christian monasticism took shape. And for this stage, we will visit the outskirts of a small town in Sicily called Palagonia. It is located in a hilly area 40 km South-West from the city of Catania and the famous Etna Volcano.

On the east of Palagonia, there is a hill overlooking the town. On its slopes we can find a beautiful villa which serves as the base for the local scout group. Next to the villa, a dirt track continues climbing for half a kilometre until it reaches the entry of a cave. As we enter in it, we discover an antique fresco on its wall depicting a lady being martyred together with other Christians. This cave is, in fact, one of the oldest hermitages of Italy and was built in the Byzantine era between the fifth and sixth centuries. As for the lady depicted on the wall, she is called Febronia. The hermitage, which is named after her, sheds light on the early phases of Christian monasticism.

So let’s discover what we know about the life of Febronia and how her story impacted the development of the monastic movement as a whole.

Even if Febronia is honoured here in Palagonia, the lady actually never visited Sicily in her lifetime. Febronia was born somewhere in Northern Syria, not far from the current borders with Turkey and Iraq. Little is known about her conversion to the Christian faith, but we learn from history that she joined the hermitage of Nisibis (in modern-day Turkey) as a child. Her fervent faith and love for God led her to an austere life devoted to prayer and study. And as a young lady, Febronia preached the Gospel with a rare wisdom.

Soon crowds came to listen to her. However, the abbess of the hermitage was rather concerned about the reason for the attention she was receiving, since Febronia was not only clever but also very beautiful. So, to make sure that the crowd would focus on the lady’s message rather than on her beauty, she decided to place a veil in front of her every time she would preach. Regardless of this, Febronia’s passion for Christ attracted many people to the Christian faith. One of her most famous converts was the wealthy widow of a Roman senator called Hiera.

Febronia began to face hardship in 304 when, in addition to a serious sickness, the worst persecution against the Christians in the Roman Empire broke out. When the threat of persecution drew closer to Nisibis, most of the nuns fled from the hermitage into remote areas. Sadly, this was an extremely difficult time for Febronia who was sick and thus forced to stay in her cell. She was not alone, however, as Hiera and the abbess cared for her until they were finally arrested.

Febronia refused to deny her faith in Christ and as a consequence was violently tortured to death. As she had become a leading Christian figures of her time, she now became the symbol of the persecution in the area. Soon her story even began to spread beyond Nisibis and became a source of inspiration in distant Western European lands such as Sicily.

But now a short word about hermitages in general.

The hermitage is probably the earliest form of a Christian monastery. Initially they were remote and humble habitations for Christians seeking to live a life dedicated to God. But what was it that inspired them to retreat in this way?

The idea that faith could be better lived outside the main centres of civilisation was not new. Already in ancient times, Biblical prophets such as Samuel, Elijah or John the Baptist had lived in the remote areas of Israel. In the second century BC, the Essenes were Jewish monks who lived near the Dead Sea. In later centuries, the movement spread beyond the borders of Israel to Asia Minor and the Sinai Peninsula in Egypt.

In 250 AD, persecution broke out against the Christians. In Egypt, several believers fled to the desert for refuge. Some of them arrived in the mountains of the Sinai Peninsula where they met the Essenes. Inspired by their lifestyle, these men and women began to settle in their caves and developed a way of living focused on prayer and worship. Soon others joined them, and eventually these caves evolved into Christian communities centred on Christ.

Although the purpose of persecution was to destroy the Christian faith, we can see how God used it to create a fresh expression of Christian community. Moreover, what is interesting with this hermitage in Palagonia is that its date of construction roughly coincides with the collapse of the Roman Empire. While destruction seemed to dominate the Western European landscape, this hermitage was part of a small movement that would later help recreate Europe after its dark years of chaos.

The blood of Febronia, among many others, was not spilled in vain.

https://soundcloud.com/aeuropeanjourney/a-european-journey-11-wicklow-ireland Patrick and the transformation of Ireland After Ukraine last week, we will visit the…