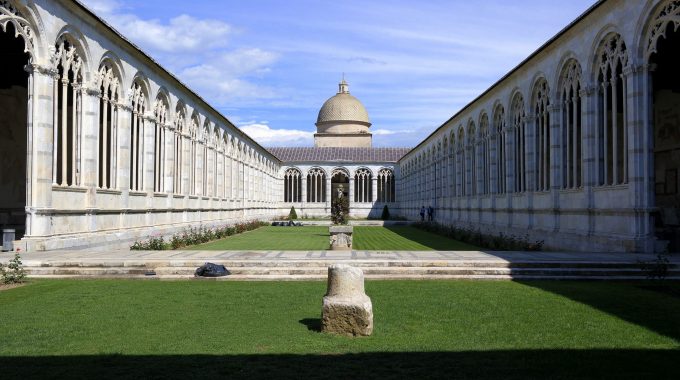 The Desert Fathers were hermits that lived in the Egyptian wilderness in the fourth century. But even if their lives were spent in remote areas, their stories have had a surprisingly profound impact on the European continent, including on its moral standards.

The Camposanto monumentale (Monumental Holy Field) of Pisa is one of many places where we can discover the impact of the Desert Fathers in Europe. This rectangular gothic cloister with an interior court is located on the Piazza del Duomo (Dom Square), next to the cathedral, the baptistery and the famous tower of Pisa.

This building dates back to the 12th century and although it looks like a monastery, it is actually a cemetery where some of the city’s most prominent people, such as archbishops, governors or university professors, are buried. The building contains also numerous works of art, including frescoes, sarcophagi and sculptures.

The walls of the cloister were covered with no less than 2600 metres of frescoes until the disastrous fire of July 1944, caused by an air raid during World War II, destroyed a great part of them. Thankfully, they have been restored to a great degree already. Today, we are going to look at a fresco called The Triumph of Death, which was restored not long ago. It is part of a series known as The stories of the Desert Fathers painted by Buonamico di Martino da Firenze, or simply Buffalmacco.

The Triumph of Death can help us understand the impact of the Desert Fathers in mediaeval Europe. It depicts several aristocrats riding their horses, horrified to discover three open graves containing corpses being eaten by giant worms. Next to the bodies, a man with a long white beard is reading a scroll to them. This man is a Desert Father called Macarius.

Macarius was born in Egypt around the year 300. At a time when it was common for hermits to settle in the Sinai Peninsula, Macarius was one of the first to settle in the Nitrian Desert, West from the Nile River and South from Alexandria. Macarius was a man reputed for his great wisdom and for his pursuit of a holy life. This led him to impose harsh conditions on himself in order to subdue his temptations. One account relates that he spent six months in a marsh exposed to the attacks of ferocious gnats.

It didn’t take long, however, for the Nitrian Desert to be filled with thousands of hermits. Macarius quite naturally responded to this by writing rules in order to organise life in the land. The solitary lives of the monks began to be regulated by worship meetings. At the time of his death in 391, the Nitrian Desert had actually become an early form of a Christian Republic.

What Buffalmacco probably wanted to communicate on this fresco was Macarius’ wisdom and pursuit of holiness. But there is a story related to this particular Desert Father that might actually give further understanding concerning what Macarius represented in mediaeval times.

When Macarius left his town for the desert, he was met by a troop of soldiers. One of the leaders, a tribune, said, ‘You are happy, for you despise the world.’ ‘It is true,’ Macarius answered, ‘we despise the world, whilst the world despises you’. And as the hermit was accompanied by a man also named Macarius, he continued by saying ‘…And you have spoken more truly than you intended; we are happy in fact and in name, for we are called Macarius, that is to say happy’. The tribune left without answering, but after returning home, he decided to leave his work, renounce his wealth and become a hermit himself.

It is possible that this story inspired Buffalmacco to paint the Triumph of Death. The aristocrats in this fresco are shown as pursuing a secular lifestyle of pleasures and riches. But when they are horrified with the stark reality of death, the Desert Father stands before them to preach the Word of God.

It is not difficult to imagine what Macarius may have been preaching. The open graves with the corpses can actually give us a clue. The giant worms recall Isaiah’s description of hell, in which the bodies of those who rebelled against God are eaten by worms that will not die, in a fire that will not be quenched (Isaiah 66:24). These corpses symbolised those who had lived in rebellion against God, similarly to the aristocrats. We can imagine that Macarius could have reminded the aristocrats of Jesus’ words to his disciples when the tower of Siloam collapsed and killed eighteen people. ‘Do you think they were more guilty than you? I tell you, no! But unless you repent, you too will perish.’ (Luke 13:4-5)

What is striking is that Buffalmacco’s message would have been totally incomprehensible, or even despised, in Roman Pisa. And yet, here we are, approximately a millennium later, with a Pisan artist calling his people to pursue godly virtues through his fresco. Clearly, the Gospel brought a great shift to this country.

Finally, it is interesting to note that Buffalmacco painted the Stories of the Desert Fathers in the years following the Black Death in the 14th century. As the world is presently facing the reality of death in new ways, this fresco is a fresh call for our generation to repent and recognise Jesus Christ as Lord and Saviour.

https://soundcloud.com/aeuropeanjourney/a-european-journey-25-witmarsum-netherlands Menno Simons Today we are travelling to the Dutch province of Friesland, to a…

https://soundcloud.com/aeuropeanjourney/a-european-journey-59-krk-croatia Christian missionaries did more than just bring the faith to the Slavic people. They…

https://soundcloud.com/aeuropeanjourney/a-european-journey-29-milan-italy Today we will continue our mini-trip in the footsteps of the Waldensians to discover…