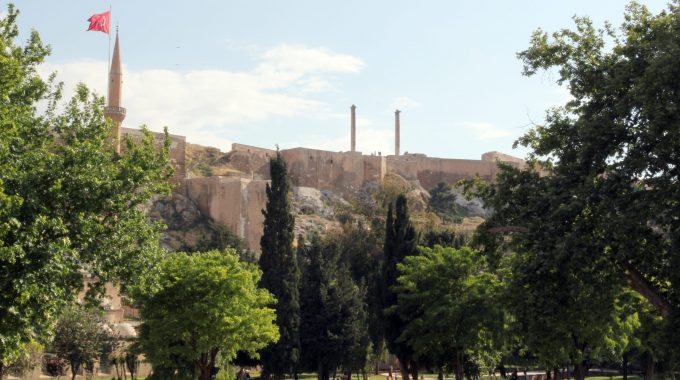 In 301 AD, Armenia became the first kingdom in the world to adopt Christianity as its official faith. But it was several centuries of Christian influence that led to this watershed moment, and the process may have actually started during the earthly life of the Lord Jesus Christ himself.

So how did the Gospel first arrive in the Kingdom of Armenia? The city of Urfa in modern day Turkey can give us some clues.

Urfa, also called Şanlıurfa in Turkish, is a densely populated city of two million people. In the first century, it became the capital of the small kingdom of Osroene and it was then called Edessa. This kingdom was then under the dominion of the Armenian Empire which ruled from the Mediterranean Sea in the West to the Caspian Sea in the East.

To find traces of these early times of history, we will visit a hill overlooking the city where an ancient castle still stands. While the walls were built in the 9th century, the castle probably dates back to the first or second century BC.

Some recent archaeological research conducted in the lands surrounding the castle have led to the amazing discovery of large tombs cut into the rock. According to the archaeologists, these tombs could be part of the world’s largest necropolis. A story published a few years ago in the Turkish newspaper Hurriyet Daily News said: Among the newly found tombs, one was situated on the highest part of the castle’s hill and was bigger than the other tombs…. It was estimated to have belonged to the nobles of Edessa King Abgar’s family.

If it is true that these tombs belonged to the nobles of king Abgar’s family, we may have here traces of the first Christian king in Armenia. And actually, for a long time, it was even believed that king Abgar would have been directly in contact with Jesus during his earthly life. So let’s find out more about this first century king.

King Abgar V became the ruler of the kingdom of Osroene in the first century. At the time, his capital was two hundred kilometres East from Edessa, in the city of Nisibis. Scholars have disagreed about Abgar’s origins even to this day. Tacitus wrote that he was Arab while Movses Khorenatsi, the Father of Armenian history (stage 91), claimed that he was Armenian.

Even though the kingdom of Osroene was part of the Armenian Empire at the time, the Romans were having an ever greater influence in the region. At some point their dominion increased so much that they required Abgar to erect a statue to the Roman Emperor Augustus in the pagan temples of Nisibis. However, Abgar, who held fast to his pagan gods, boldly refused their request.

In this mounting tension, Abgar realised that it was not safe to keep his capital in Nisibis, because the area was so flat and could be easily overtaken by the Roman army. So he chose to move his capital to Edessa and to establish his palace in the castle we’re visiting today. The hill provided a better stronghold against attacks.

King Abgar then sought to unite with king Arsaces of Parthia (in modern-day Iran) to resist the Romans. But sadly, circumstances didn’t seem to be in favour of Abgar. Arsaces died unexpectedly and political instability took hold of Parthia. Abgar was now even forced to take his own army there and restore order.

It was a story linked with this expedition that led many generations of Armenians to believe that Abgar would have been in contact with the Lord Jesus. Here is how the story went.

During the expedition to Parthia, Abgar became seriously sick. As he had heard of the miracles that Jesus was performing in Israel, Abgar sent emissaries to Jerusalem with an official letter asking Jesus to heal him. The Lord answered that he would not come in person but that he would later send Thaddeus, one of his apostles, after he would be lifted up to heaven. And so, shortly after the ascension of Jesus, Thaddeus went to Abgar and healed him. Through this miraculous healing, Abgar became a believer in Jesus Christ. While this story sounds fascinating, in the fifteenth century, the Italian priest Lorenzo Valla analysed the letter of Jesus in answer to Abgar and discovered that it was in fact a forgery.

Even if this letter was probably a forgery, it is still quite possible that Thaddeus preached the Gospel to Abgar who, as a result, became the first ruler of the Armenian Empire to convert to Christianity. Moreover, the early Church historian Eusebius of Caesarea wrote that Abgar’s conversion had transformed the city of Edessa into one of the strongest Christian communities of the area for several centuries. The church of Edessa was strategic to open the way for the Gospel to reach all the lands under Armenian rule, and even modern-day Iran.

In the 12th century, Edessa was lost to Muslim rule. But even if the city is still predominantly Muslim today, the castle stands as a reminder of the flourishing church of Edessa which was highly influential in the history of Armenia.