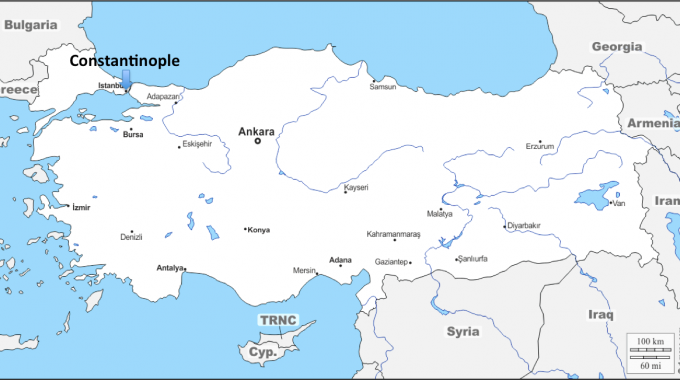 Today we will start a new miniseries in which we will learn more about one of the most important churches of Europe, the Eastern Orthodox Church.

In this stage, we will visit the city that played a key role in the development of Orthodox Christianity. I am referring to Constantinople (today Istanbul).

With fifteen million inhabitants, the city is the largest of Europe. It was founded before the 7th century BC by colonists from the Greek Peloponnese. Until the 4th century AD, it was a relatively small town named Byzantium.In 330, it suddenly rose to prominence when Constantine, the first Christian Roman Emperor, decided to move the capital of the Empirehere and rename it ‘New Rome’. Later on the city was named Constantinople (The City of Constantine) in his honour.

The place we are going to visit today is one of the most important sights of the city, Hagia Sophia (or Church of the Holy Wisdom). This magnificent church built in 537 is located near the Straight of Bosporus. Its unique architecture mixing Christian and Islamic signs has a lot to reveal to us.

Before taking a closer look at the history of the Orthodox church, we need to look at the way the universal church developed in the first centuries.

After Jesus’ death and resurrection, the first believers began to spread the Gospel outside of Israel. Soon four centres of Christianity became prominent: Jerusalem, Antioch, Alexandria and Rome. The Gospel also reached Byzantium quite quickly, but it is only later that it became a major centre of Christianity.

Soon bishops were chosen to lead the four main centres of Christianity. Among other things, a bishop taught the Scriptures and worked as both a spokesperson and a leader for the community. Their churches were naturally larger than others. So when ministers were needed elsewhere, they were sent there with the blessing of the bishops. For example, missionaries from Antioch were sent to Syria, Armenia or Georgia, while missionaries from Alexandria were sent to Ethiopia or Nubia (Southern Egypt), where they served churches that still exist to this day.

But how did Constantinople rise to prominence?

In the 4th century AD, two major changes occurred in the Roman Empire. The first was that Christianity became the official religion of the Empire. This inevitably changed the role of the bishops who now received more earthly power, especially in Rome, which did not always have good consequences. The second change was that the capital of the Empire was moved from Rome to Constantinople. Obviously, the church of the city grew in importance. But officially it was still supervised by the church of a nearby town called Heraclea.

Sothe emperor felt the need to change the status of the church of Constantinople in order to better reflect the new political structure. This was one of the reasons behind the organisation of the Second Ecumenical Council, fifty years after the first one in Nicaea. This time, it was organised here, in Constantinople, in 381.

While this Council brought valuable theological outcomes, it also made an important declaration regarding Constantinople:

“The Bishop of Constantinople receives precedence of honour after the Bishop of Rome, because that city is New Rome.”

This declaration had three profound outcomes, one of which was positive and two of which were negative.

The positive one was that this declaration was what made Constantinople the heart of Christianity in the region for the centuries to come. The magnificent Hagia Sophia was built to reflect this new position of the local church. Ministers were trained here and sent to establish churches in lands not yetreached by the Gospel. The church was also at the heart of legal reforms inspired by the Bible, such as the Justinian code. This legal code became the foundation for our European legal tradition.

So how about the negative ones?

The first is that this declaration offended the bishops of Alexandria and Antioch, which in turn broke the unity of the church. And seventy years later, offence turned into separation when Antioch and Alexandria rejected the canons of the Council of Chalcedon, held in a nearby suburb of Constantinople. To this day, the churches of Georgia, Armenia, Ethiopia, and the Syriac and Coptic churches are officially separated from the Western churches.

The second was that, even though the position of Rome was not challenged, the Roman church feared that the rise of Constantinople would create a power struggle between them. Sadly, this was true. For the following centuries, the relationship between Rome and Constantinople was characterized by strife. Finally, this led to the infamous Great Schism of 1054 that was actually triggered right here in Hagia Sophia.

These divisions greatly weakened the lands affected by the splits. In fact, the first Islamic invasions succeeded in all the lands affected by the schism of Chalcedon. Later on, even the success of the Islamic invasion of Constantinople in 1453 was a result of the weakened position of the Orthodox Church after the Great Schism. The four minarets surrounding Hagia Sophia also testify to this.

Today, however, dialogue between these historically divided churches is taking place more than ever before. Moreover, many refugees coming into Europe are members of the old Eastern churches. Could this be part of God’s plan to restore the unity of his Church?