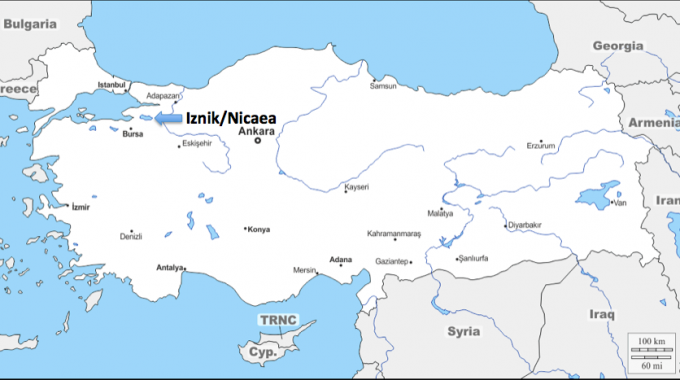 The First Council of Nicaea

Today we’re actually stepping just outside Europe. We will cross the Bosporus, which separates Europe and Asia and will travel for 150 km to a town called Iznik.

As we enter the old town through the ruins of the medieval walls, we discover an interesting mixture of Christian and Muslim buildings. The 6th century Hagia Sophia and the 14th century Haci Özbek mosque are two examples revealing the history of this land. In fact, before the Ottoman invasions in the 13th century, the city had been a prominent Christian centre of the Roman Empire, and it was named… Nicaea.

For our purposes, we will go along the Spandau boulevard right to the shore of the Lake Iznik. And the place that we want to consider actually lies under the waters of the lake. In recent years, archaeologists have discovered the existence of an underwater basilica. Most probably, it had been built just a year after the Council held right here in Nicaea in 325, very possibly on the site where the participants of the Council met. Through the centuries, changing water levels might have submerged the basilica.

The First Ecumenical Council of Nicaea is probably one of the key events of history. But what was it all about and why is it so important?

In the beginning of the 4th century, Constantine adopted Christianity as the religion of the Roman Empire. Very soon however, some troubles began to arise in Alexandria, one of the Empire’s most prominent cities. At the heart of the troubles was a theological dispute between two factions: the Arians, who believed that Jesus was only human and not God, and the Conservatives. Soon these troubles began to worry him, as he understood that a division in the body of Christ could be a direct threat to the unity of the Empire itself.

Constantine first sent a close friend to Alexandria, bishop Hosius of Cordova, to settle the matter. After Hosius’ unsuccessful mission, Constantine decided to call for a general council, in which all the bishops of the empire would be gathered to discuss and settle the question, a totally new idea at the time. And for this extraordinary gathering, Constantine chose his holiday residence, which was here in Nicaea. Constantine himself financed the journeys and the lodging of the participants.

Initially it seemed that the Arians could win the debate, as many prominent figures from the East seemed to support them. But very soon the wind started to turn against them. Among their main opponents was the personal secretary of the bishop of Alexandria, a young man named Athanasius who was about 40 years younger than Arius. Athanasius had already shown his ability to defend Scriptural faith during the troubles in Alexandria.

At times, the debates in Nicaea turned into a direct confrontation between Athanasius and Arius. While the latter seemed to be more cunning than his young opponent, Athanasius’ defence of the Scriptural doctrine soon triumphed.

One of the main goals of the council was to formulate a creed that would define the Christian faith and that could be accepted by the bishops of the entire world – and that would also help in identifying heresies.

The difficulty was not so much in expressing what the Scriptures said (both camps defended their views with the Scriptures) but in expressing what the Scriptures actually meant. For this reason, a new Greek word was invented: homoöusion (ὁμοούσιον)(literally consubstantial) which meant that Jesus Christ, while having been fully incarnated into human nature and flesh, was fully God. This terminology shed a light into the Arian error regarding Jesus and helped formulate a sound Scriptural creed.

And so, on the 25th of July 325, the majority of those present signed what became known as the Nicene creed.

Although Iznik is just outside of present-day Europe, the creed signed here became the theological foundation for the development of all spheres of life in medieval Europe.

And still today, beyond the many divisions that the body of Christ has experienced, nearly all Christian confessions still agree with the Nicene Creed. This is a remarkable achievement that we ought to be thankful for.

Annex: Philip Schaff’s English translation of the Nicene creed as adopted in 325

We believe in one God, the Father Almighty, Maker of all things visible and invisible.

And in one Lord Jesus Christ, the Son of God, begotten of the Father the only-begotten; that is, of the essence of the Father, God of God, Light of Light, very God of very God, begotten, not made, being of one substance (homoöusion) with the Father; by whom all things were made both in heaven and on earth; who for us men, and for our salvation, came down and was incarnate and was made man; he suffered, and the third day he rose again, ascended into heaven; from thence he shall come to judge the quick and the dead.

And in the Holy Ghost.

But those who say: ‘There was a time when he was not;’ and ‘He was not before he was made;’ and ‘He was made out of nothing,’ or ‘He is of another substance’ or ‘essence,’ or ‘The Son of God is created,’ or ‘changeable,’ or ‘alterable’—they are condemned by the holy catholic and apostolic Church.

https://soundcloud.com/aeuropeanjourney/a-european-journey-32-nikyup-bulgaria After Malta, we will continue with our second stage of this miniseries in search…