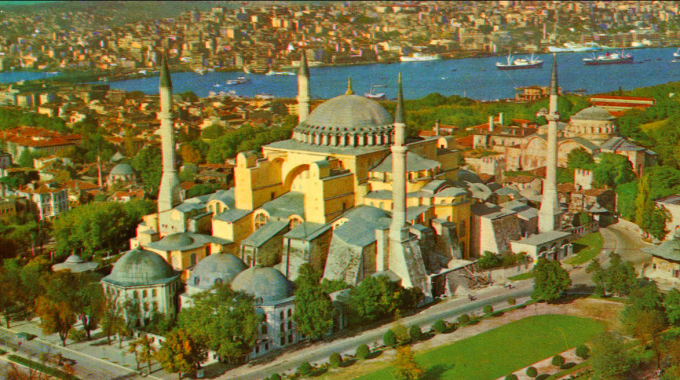 Today we will continue our miniseries exploring the history of the Orthodox Church.

Our first stage led us to Constantinople, to the majestic basilica Hagia Sophia, which is the heart of Eastern orthodoxy. We will return to this place today to discover how much this basilica has influenced Eastern Orthodox Christianity and even other spheres of life.

Eastern Orthodox worship is also expressed through architecture, and this is what we will explore today. But to understand the architecture of Hagia Sophia, we need to look at how architecture evolved in the Roman Empire.

When the Romans conquered Greece in the fifth century BC, they realised that Greek culture was superior to theirs. Their sense of inferiority led the Romans to adopt much of Greek culture.

In the specific field of architecture, the Romans developed a style strongly inspired by the Greeks. The Greco-Roman style continued to influence architecture in Rome for more than eight hundred years.

A change began when Diocletian rose to power in the Roman Empire (286-305). This man, born in Dalmatia, is best known as one of the worst persecutors of Christians. But there is another less known fact about Diocletian, which is that he also discovered an architectural style from the Middle East during his journeys in the province of Asia (modern-day Western Turkey). Remnants of this Asiatic style can still be found today in cities such as Baalbek in Lebanon.  Characteristic to this style are square buildings with arks and cupolas. So during his reign, Diocletian also introduced this new style to Rome. Later on, the Roman architectural style became a blending of Roman-Greek and Asiatic styles.

Although it was certainly not his intent, Diocletian’s discovery had a lasting impact on church architecture.

And here is the reason why: Soon after him, when Constantine the Great became Roman Emperor, he legalised Christianity and moved his capital to Byzantium, which he renamed New Rome. To build his new headquarters, Constantine chose the new blended style, which eventually came to be known as Byzantine architecture.

Constantine chose to build his palace on top of a hill that he named Augustaion, which overlooks the Strait of Bosporus. Next to it, he also built a hippodrome, a forum, the senate and the basilica Hagia Sophia.

Although earlier churches had usually been built as long basilicas (e.g. the Church of Saint Demetrios in Thessaloniki), regular persecutions hadn’t allowed Christians to develop a distinctive architectural style. Church architecture had simply reflected the architectural style of the Empire. So, in the Byzantine era, churches began to be built in round or octagonal shapes, with a cupola as the roof. An example of this might be the Golden Church of Antioch, which was also built under Constantine. Nevertheless, these shapes presented serious engineering challenges. So for this reason, churches moved to a square shape instead, all the while maintaining the cupola on top. This was the shape that was adopted for the construction of Hagia Sophia.

This type of church became a model for most Eastern Orthodox churches, giving some Eastern European lands their specific character to this day.

In the sixth century, Hagia Sophia was destroyed by a fire, but was rebuilt in an even more magnificent style under Emperor Justinian. During the dedication, Justinian famously declared:

“Glory be to God, who has found me worthy to do such a work. Solomon I have beaten you.”

This shows how important church architecture was for the worship of God but also for the glory of the empire.

Hagia Sophia was not only foundational for the architecture of the Eastern Orthodox churches. It was also the centre of significant political and religious developments for centuries.

All the Byzantine Emperors were crowned here after Constantine’s reign. It was also here that Catholic Legates laid the bull of excommunication on the altar, thus triggering the famous Great Schism in 1054.

It was here that the Emperor Constantine XII received his last communion before dying in the fall of Constantinople, at the hands of the Ottomans on the 29th of May 1453. Instead of destroying Hagia Sophia, however, the Muslims transformed it into a mosque. And interestingly enough, the church became a model for future mosques,  just as it had been the case in Eastern Orthodox Christianity. And it is for this reason that we can see cupolas topping many mosques all over the world.

Hagia Sophia remained a mosque until 1931 and was then transformed into a museum. Nevertheless, the place retains a significant role even today. In recent years a movement has arisen to demand that Hagia Sophia be rededicated to its original purpose. And on the other hand, Turkish president Recep Tayyip Erdoğanhas proposed making it a mosque again in response to the recognition of the Armenian genocide by the Vatican.

Whatever the future holds, Hagia Sophia remains a key place for understanding not only Eastern Orthodox Christianity, but also the history of Europe and of the Middle East.

https://soundcloud.com/aeuropeanjourney/a-european-journey-34-passau-germany Last week we were in Merano to discover the story of Valentine, the missionary…