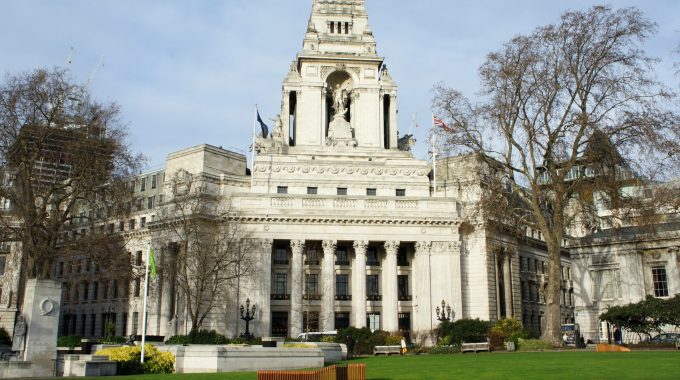 Many believe that the Reformation was simply a dispute between theologians. Nevertheless, it involved people from all spheres of life, including rulers and lawyers.

Today we will explore the key role that a lawyer played in the English Reformation. And to do so, we will visit the capital of England, London. This is the most populated city of Britain, and obviously Buckingham Palace, Piccadilly Circus or Trafalgar Square are among the most famous locations here.

The Tower Bridge, which was inaugurated in 1894, is also a famous landmark of London. From the bridge a short walk north, past the mediaeval castle called the Tower of London, leads us to Trinity Square Gardens. There we find two monuments dedicated to the merchants who were victims of the two world wars. But the place we are going to visit lies at the heart of the Gardens and is called the Site of Ancient Scaffold of Tower Hill. The ancient scaffold was a place of execution of high profile traitors and criminals in Mediaeval times and there are several plaques with the names of notorious people who were executed here. Among them are dukes, barons and earls. But there are also clergymen, including Christopher Love (a Presbyterian minister) and two Archbishops of Canterbury, namely Simon Sudbury and William Laud.

On one of the plaques, we find the name of the lawyer that I mentioned. His name is Thomas Cromwell, and the plaque reveals that he was Earl of Essex and that he was executed in 1540.

So, who was Thomas Cromwell and how did he influence the English Reformation?

Cromwell was born eight miles (or twelve kilometres) West from London, in a little town called Putney, at the end of the fifteenth century. Very little is known about his childhood, and the only information we have about his youth is that he travelled abroad, although we don’t know exactly where.

After his return, Thomas Cromwell married Elizabeth Wyckes, but she died fourteen years later in 1529. His career as a lawyer led him to serve the Cardinal and Archbishop of York Thomas Wolsey and, later, King Henry VIII. And some time before serving the king, Cromwell adopted reformed theology.

Thomas Cromwell came to prominence in 1527 when the king wanted to divorce Catherine of Aragon in order to marry Anne Boleyn. Cromwell suggested that the king of England should be the head of the church instead of the pope. This was a great step forward in easing the Reformation in England.

After the connection with Rome was severed, Cromwell was given high offices, such as Secretary of State and Lord Chancellor. In these positions, he sought to transform the policy in favour of the Reformation. He was a key person for organising the convocation that led to the Ten Articles of Faith of the Church (see last episode). Later on, Cromwell convened a new synod in order to elaborate a doctrine more consistent with the Reformation. This synod led to drafting the Institution of the Christian Man, that is the Bishop’s book which is part of the Anglican book of common prayer. He supported the appointment of several prominent Reformers in high positions of the church, such as Hugh Latimer, Edward Foxe or Nicholas Shaxton. He also sponsored the publication of the Bible in English and ordered that every parish should have one in their church.

For a decade or so, Thomas Cromwell succeeded in advancing many laws in favour of the Reformation. And yet, in 1540, he was executed here at the scaffold while Henry VIII was still king. How did this happen?

The supporters of Roman Catholicism had not died out in England and Cromwell obviously needed to address the situation. He suppressed some of their uprisings, closed their monasteries and removed their statues and shrines, because he considered them to be idolatrous. Yet some of his decisions only served to swell the opposition movement.

Cromwell was aware of the increasing opposition to the Reformation, but it seems that he found a way to turn the tide again through the unstable marital situation of the king. Henry VIII had become increasingly unhappy with Anne Boleyn, who like Catherine of Aragon, had ‘failed’ to give him a son. Anne Boleyn had also dared to oppose some decisions of the court, which led to her execution at the Tower of London just nearby. After the king’s short marriage with Lady Jane Seymour, who died in child birth, Cromwell suggested that he marry the German Protestant princess Anne of Cleves. Through such a union, the Reformation in England would have progressed even further.

Unfortunately, although the king followed Cromwell’s advice, he disliked Anne’s physical appearance. And although they married on the 6th of January 1540, six months later their marriage was annulled. Cromwell’s planshad failed. And soon after, Cromwell was found guilty of treason against the king and was executed here on the 28th of July 1540.

Later on King Henry VIII regretted his decision and realised that he had lost a precious leader. During the last years of his reign, Roman Catholicism regained strength. However Cromwell’s work left a deep mark and was a determining factor for the Reformation in England in the next decades.