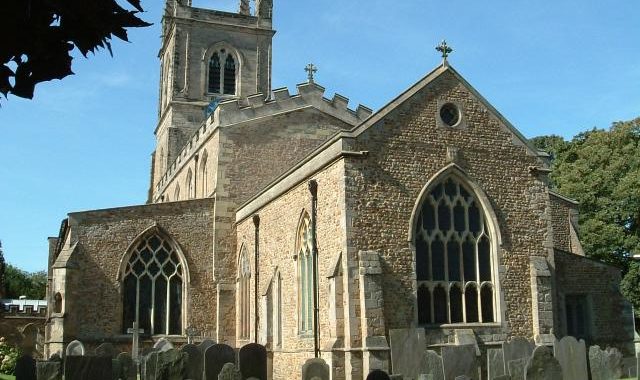 After William the Conqueror was established as king of England, the dominion of the Roman Catholic Church over the British Isles reached its climax. And even if several kings tried to loosen the grip of Rome, it was finally a theologian that began this process.

In order to discover how this process started, we will visit Lutterworth in England. It is a market town of nearly 10 000 inhabitants located 150 km North from London and 22 km South from the city of Leicester.

One of the most famous streets of the town is the Church Street. It is not surprising that this street, which starts from the main road, ends in front of the parish church gate. This mediaeval Anglican Church is called St. Mary’s.

When we enter the church, we discover several mediaeval works of arts, such as the doom painting above the altar. But the work of art that we are going to look at is an etching which represents a man teaching the Bible to a group of people. Behind him are two monks watching with a worried expression on their faces. Below the etching we discover that it is dedicated to John Wycliffe.

Who was John Wycliffe? And what is his connection to Lutterworth?

John Wycliffe was born in Hipswell, a village in the North of Yorkshire, in the 14th century. He studied in Oxford, where he later became professor of divinity. In 1374, Wycliffe became priest of the parish church of Lutterworth where he stayed until his death ten years later. And as mentioned earlier the Roman Catholic Church had a strong hold over Britain in his time. But where successive kings failed to loosen their hold, John Wycliffe was one of the first people to seriously challenge the Catholic domination over England.

So how did he do that?

Contrary to the kings, his primary concern was not politics but theology. As a professor of divinity in Oxford, Wycliffe started to realise the discrepancies between the Roman Catholic theology and what the Bible truly said. So during his time in Oxford, Wycliffe began to publish books and pamphlets in which he denounced several Catholic practices, such as the doctrine of transubstantiation or the infallibility of the pope. He also wrote that the Church of Rome was not the head of all other Churches, and that St. Peter did not hold the keys of heaven.

Wycliffe’s teachings started to attract many, including some very influential people. This situation began to worry the pope. And so in 1377, pope Gregory XI sent copies of a papal bull concerning Wycliffe to the Archbishop of Canterbury, the bishop of London, King Edward III and the University of Oxford. Thankfully for Wycliffe, both the pope and the king died soon after the bull was sent. Nevertheless, the successor of Gregory XI, pope Urban VI wrote to the new king of England, Richard II, to stop Wycliffe from spreading his teachings. But it was too late. Wycliffe had gained enormous respect in England. Even in 1382, when the university of Oxford received an order to remove him from his professorship and to arrest him, Wycliffe escaped and spent the last two years of his life in freedom.

Now returning to the etching in St. Mary’s: why would the monks look worried by what John Wycliffe was doing?

Contrary to the beliefs of the time, Wycliffe taught that the New Testament, and not the teachings of the monks or the traditions of the Church, was a perfect rule of life and manners and that it ought to be read by the common people. For this reason, Wycliffe endeavoured to translate the New Testament in English during his time here in Lutterworth. And even if the printing press had not yet been invented, his translation began to impact the common people. Wycliffe also believed that all human traditions were superfluous and sinful, that the only goal of life was to practice and teach the laws of Christ. He believed that forcing men to a prescribed form of prayer was contrary to the freedom granted them by God. Through this kind of teaching, the first steps towards freedom of conscience were taken in England.

Many of Wycliffe’s ideas continued to influence England and the rest of Europe after his death. And although Wycliffe didn’t talk specifically about salvation by faith in Christ alone, it is no surprise that John Wycliffe became commonly known as the morning star of the Reformation. It is quite curious to note that the name of this town, Lutterworth, actually reminds us of the main character of the Reformation, Martin Luther.

Finally, let me finish with the testimonial given by the University of Oxford at his death: “That from his youth to the time of his death, his conversation was so praiseworthy, that there was never any spot, or suspicion noised in him; that in his reading and preaching he behaved like a stout and valiant champion of the faith, and that he had written in Logic, Philosophy, Divinity, Morality, and the speculative Arts, without an equal.”