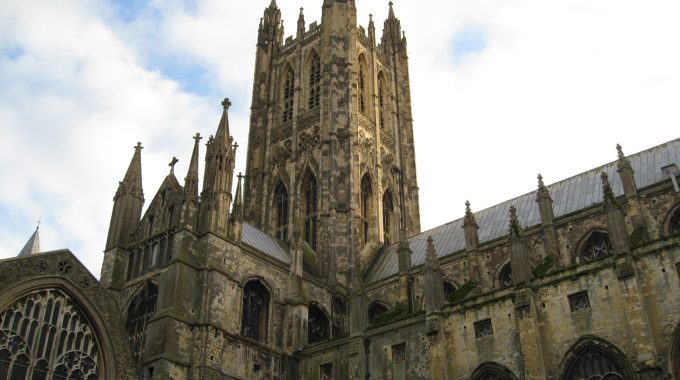 In our last episode, we discovered the circumstances that led to the beginning of the English Reformation in the sixteenth century. At the end, I suggested we look at how the Reformation began to be enforced in our next episode.

In order to do that, we will visit the city of Canterbury in the county of Kent. Canterbury has a rich history. Archaeological research reveals that the area was already inhabited in prehistoric times. Later both the Romans and the Anglo-Saxons established a settlement here. Canterbury became an important centre for trade as it was ideally placed near the Channel and along the River Stour. At the end of the sixth century, an Italian monk named Augustine (not the North African Church Father) was sent here by the Pope as a missionary to convert the king of Kent Æthelberht. After he succeeded in doing so, Canterbury became the headquarters of the Archbishop of the Church in England and has remained as such ever since.

As we can imagine, there is a lot to discover in Canterbury. We could visit the ruins of St. Augustine’s Abbey, the Huguenot weavers’ houses or the ruins of the castle, to name but a few tourist attractions. However, for this episode, we will visit the main building of the city, which is obviously the Cathedral.

Canterbury Cathedral, formally known as the Cathedral and Metropolitan Church of Christ of Canterbury, was built in the time of Augustine and Æthelberht, in 597 although the present building dates back to the eleventh century. Before the Reformation, the cathedral was part of a Benedictine monastery. And obviously we are visiting this location today, because it played a significant role in the Reformation, particularly in formulating the official Church doctrine.

The king knew that it was time to create a doctrinal statement but it was not simple. For although the king had appointed the Reformer Thomas Cranmer as Archbishop of Canterbury, opposition to the Reformation came from two sources. Firstly, some prominent English clergymen, such as the Bishop of Rochester John Fisher, remained attached to Rome. Secondly, the monasteries, which were directly under the authority of the Pope and not of the English clergy, resisted the Reformation. The monks sought to create popular support for their cause, which obviously displeased Henry VIII. As a countermeasure, the king sent the Chancellor of the Exchequer, Lord Thomas Cromwell, to inspect the monasteries.

The monasteries felt threatened by the looming inspection. And there were good reasons for this since many of them were in a state of moral and financial corruption. Some abbots even preferred to surrender their monasteries to the king directly in order to avoid inspection. Not long after the inspections, the king passed a decree to close most of the monasteries in England and to bring all the offerings to the saints into his treasury. This amounted to quite a sum of money and it is easy to understand that the resentment of the monks deepened through his actions.

The king’s decision to close the monasteries was not as positive as one could imagine for the Reformed side. For when the monks lost their monasteries, many were appointed parish priests. This meant that they were now officially part of the Church of England. This had an effect to reinforce the Roman Catholic side within the English Church.

In 1536, the king called for a clerical Convocation (or a Synod) in order to formulate the official doctrine for the Church of England. And Henry VIII wanted it to be created quickly. So the bishops and leaders from both sides gathered here in the Canterbury Cathedral to find common ground.

The Convocation gave birth to the Ten Articles of Faith. But this document, which was written in haste, was rather confusing. Its first part included several reformed principles, such as the command to instruct people to believe the whole Bible and to preach salvation by faith alone in Christ. The last five points, however, remained Roman Catholic, such as venerating images and praying to the saints or for the deceased. And even though the practice of indulgence was now officially condemned, the notion of purgatory was kept.

In the preface the king required all his subjects to accept the Articles of Faith, as he believed that these would teach people to honour God and to seek the welfare of his people. But sadly for Henry VIII, these articles of Faith did not provide the Church with a stable theological foundation. Neither the Reformers nor the Catholics were satisfied with the articles. And so it was that over the next 17 years, several other doctrinal statements were written, adopted and again discarded.

But as we will discover next week, the theological instability that I have discussed in this episode was just one of the many struggles the Church of England would have to overcome in the following decades.