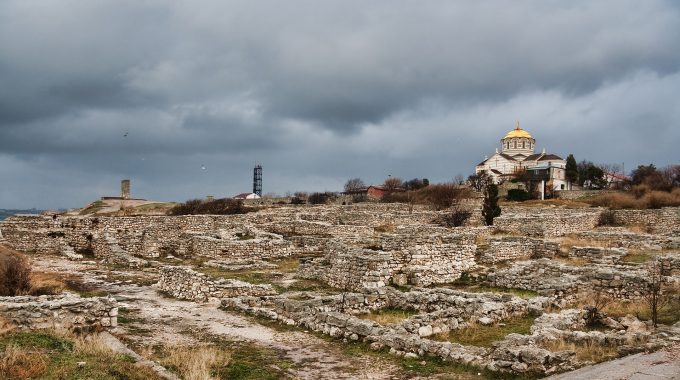 Nowadays, evangelization is often understood as preaching the gospel to non-believers. But this understanding lacks a broader societal perspective. Is it possible for a Christian nation to evangelise a non-Christian nation?

Actually in the Old Testament we discover that it was God’s purpose for Israel to inspire other nations towards Himself. And in European history, Christian nations seem to have also drawn other nations to God. To discover an example of this, we will visit Sevastopol in Crimea. This city with a Mediterranean climate is located on the shores of the Black Sea.

Sevastopol was founded in 1783 when the Russian Empire controlled the area. The city was built on the ruins of a much older city called Chersonesos. It was founded as a Greek colony in the 6th century BC and lasted for 2000 years, until the invasions of the Muslim Golden Hordes, or Tatars, in the 13th and 14th centuries. Today, we can still find many ruins in the city dating back to the Greek period.

A curious fact about Sevastopol is that there are two cathedrals dedicated to St. Vladimir here. One is in the newer part of the city, the other in the ancient part. For this reason the latter is also named Chersonesos Cathedral, which we will visit today.

So who was Vladimir and why was he a significant figure in history?

Vladimir was a prince of Kiev from the tenth century, who was baptised in the Christian faith in Chersonesos. And the exact place of his baptism was most probably where the Chersonesos Cathedral stands today.

But before talking about Vladimir, let’s take a look at what happened during the century between him and Askold and Dir (stage 51).

The murderer of the two princes, Oleg the Seer, became prince of Kiev. And when he died, his brother Igor I succeeded him. Even if neither one of them was a Christian, Christianity never really disappeared from among the Kievan Rus’. Igor’s wife, Olga, was a Christian as we discovered in stage 15.

When Olga’s pagan son, Sviatoslav I, was prince, Olga became regent of the principality, as her son was involved in military campaigns. She also raised her grandchildren, one of whom was Vladimir, and instructed them in the Christian faith. Olga died in 969 and Vladimir became prince of Kiev only a few years after her death. Nevertheless, Vladimir was not yet a Christian and was still wavering as to which religion would best suit his principality.

Several steps were necessary for Vladimir’s conversion. The first step was obviously his upbringing through his Christian grandmother Olga.

The second step was a process of comparing the religions of the nations surrounding his principality. As a prince, he met ambassadors from the Volga Bulgaria, a neighbouring Muslim nation in the East. He also met Khazar Jews, Catholic Christians from Germany and a Greek Orthodox scholar named Constantine. This man was a master of what we call apologetics today. He exposed the lies of other religions, spoke about the redemption of humanity through the blood of Christ and about justice in the life to come. Constantine’s exposition seemed to convince Vladimir.

Nevertheless, Vladimir did not yet fully embrace the Christian faith. For this, he still needed a third step. He led a military campaign to the Greek lands, something that seems to have been common among the Kyivan monarchs since Askold and Dir. His first objective was to invade Chersonesos, where we are today.

Vladimir vowed to embrace Christianity if he gained possession of the city, which he did. Then, during the negotiations with the Greek Emperor, he requested the hand of the Emperor’s sister, Anna. And for the sake of her country, she accepted. Vladimir was then baptized, and as a consequence of his conversion, he returned the city to the Byzantine Empire.

But why is this story an example of one nation evangelizing another?

This brings me to the final step of Vladimir’s conversion. In his writings, we discover one of the reasons that convinced him to embrace Christianity. He wrote: “I had long examined and conceived a love for the Greek Law.”

The Greek Law that Vladimir referred to was the Codex Justinianus, a Law Code that had been compiled in the Byzantine Empire under the Emperor Justinian the Great, in the sixth century. This Law Code was built upon the God of Christianity and sought to reflect Christian ethics. This brought a deep transformation within the Byzantine Empire and the Justinian Code has served as a basis for law in the Western world to this day.

Vladimir had come to Chersonesos to kill, steal and destroy. But he left with God’s grace and wisdom to organise his principality according to God’s principles.

https://soundcloud.com/aeuropeanjourney/a-european-journey-10-molochansk-ukraine The Russian Mennonites After England last week, we will now travel to a small…

https://soundcloud.com/aeuropeanjourney/a-european-journey-8-plovdiv-bulgaria After Liège last week, we now travel 2000 km down to the Balkans, to…