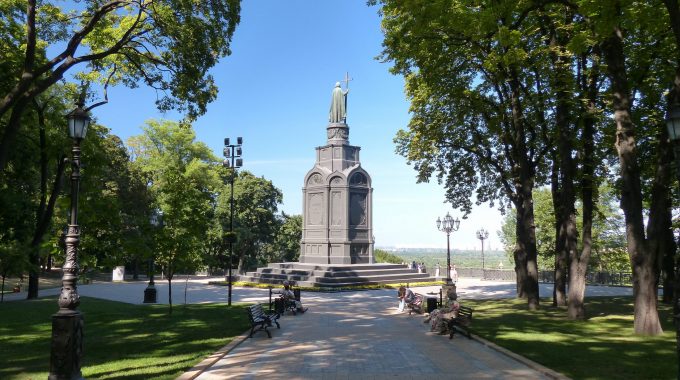 Vladimir the Great is considered to be the prince that Christianised the Eastern Slavic nations. But why was his contribution so significant?

This is what we are going to explore in the third stage of this miniseries searching for traces of how the Gospel spread among the Eastern Slavic nations.

For this stage we are returning to Kiev, the capital of Ukraine where we were two stages ago. We visited a church dedicated to the Apostle Andrew, but today we will go less than a kilometre further south, to Volodymyrska Hill, which overlooks the Dnieper river. There we find the St. Michael’s Golden-Domed Monastery, which was restored after the fall of the Soviet Union, as well as the ministry of Foreign Affairs of Ukraine.

But the location we will visit is a monument in a parklocated half a kilometre away from the monastery. This monument is dedicated to Vladimir the Great. It is a massive octagonal structure built in the Byzantine style. There we see the prince standing with a cross in his right hand and a hat in his left. The Russian sculptor Vasily Demut-Malinovsky began the monument but died before its completion. Thenthe Baltic German sculptor of the Russian imperial court, Peter Clodt von Jürgensburg, finished the monument which was finally inaugurated in 1853.

In our last stage, we discovered how Vladimir had adopted Christianity during his attempt to seize the Greek city of Chersonesosnear modern-day Sevastopol in Crimea. But his personal conversion alone cannot explain how Christianity became the dominant faith of his country. The Tale of Bygone Years written by Nestor the Chronicler in the 11th century can help us find more clues.

The adoption of Christianity as the official faith of the country was greatly eased by the conversion of most of Vladimir’s officials. Before his baptism in Chersonesos, Vladimir had a serious eye-disease. The Tale of Bygone Years explains that Vladimir miraculously recovered his eyesight during his baptism. He then declared: “Now I have seen the true God”. This event greatly impressed the officials who were with him in Chersonesos. Many became convinced of the superiority of the God of Christianity and were baptized in the same place as Vladimir.

Vladimir then returned to the capital of his country, Kiev. Eight years earlier, Vladimir had erected a pagan shrine in honour of the highest god of Slavic paganism, Perun, probably right on this hill. But when Vladimir returned from Chersonesos, one of his first decisions was to throw the statue of Perun into the Dnieper. Many pagans went to the river to see if the god would be able to save itself, but when they realised that nothing happened, many of them turned away from paganism. Later on, Vladimir built a church on the location previously dedicated to Perun, which was a clear message to all his subjects.

The day after Vladimir dismantled the pagan shrine, he commanded all the citizens of Kiev to be present at the shore of the Dnieper in order to be baptized in the Christian faith. And so the next day, all the people of Kiev gathered to be baptized by the Greek bishops and priests that had travelled back from Chersonesos with Vladimir. There, according to the Tale of Bygone Years, Vladimir pronounced the following prayer:

“O great God, who hast made Heaven and Earth, look down upon these Thy new people. Grant them, O Lord, to know Thee the true God, as Thou hast been made known to Christian lands, and confirm in them a true and unfailing faith; and assist me, O Lord, against my enemy that opposes me, that trusting in Thee, and in Thy power, I may overcome all his wiles.”

Obviously Vladimir’s methods of converting people may seem rather tyrannical nowadays. In our modern understanding, faith is a private choice that can’t be forced upon anybody. But while it is true that faith involves a personal decision, we may fail to realise that faith has strong political implications as well. For most of human history, the laws of a given nation were always rooted in an ultimate belief, whether Christian or pagan. And as we saw during our last episode, Vladimir was especially attracted to the Greek Law, which was based on the Bible. He had realised that it was superior to any other law he had come across. But to be able to implement it in his own nation, Vladimir knew that he needed to make Christianity the official faith of his principality.

Nevertheless, the compulsory baptism of the Kievan Rus’ was not enough to establish Christianity among the people. Vladimir also built several churches in Kiev and in other towns of his principality. He established priests to minister the Christian faith to the people of his country. He also sought to develop the education system of his country by establishing several schools and making education compulsory for the children of his officials.

The presence of a monument in honour of Vladimir the Great is not simply a memorial in honour of the arrival of Christianity in the country. It is also a testimony to the impact that the Christian faith has had in every area of life among the Eastern Slavic nations.

During our next stage, we will discover how the Christian faith spread beyond modern-day Ukraine to the distant lands of Russia.

https://soundcloud.com/aeuropeanjourney/a-european-journey-67-rhondorf-germany In the 1930s, the Nazis rose to power in Germany. And yet, two decades…