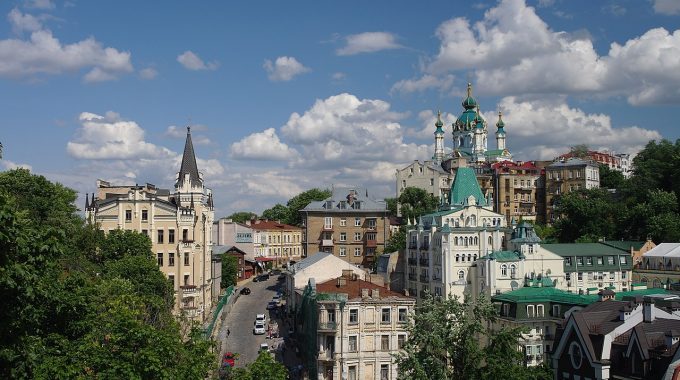 When the communists took control of the Soviet Union in 1917, their intention was to build an atheist nation and erase Christianity from the collective memory. But even the terrible persecutions under Joseph Stalin didn’t succeed in wiping out churches with onion domes.

In fact, when Communism took over, Christianity had been present in the former Soviet Union for over a thousand years and had significantly shaped the Eastern Slavic peoples. But how did the Christian faith reach these lands? And what specific influence has it had? To find some answers to these questions, we will start a miniseries to explore some of the places that show how Christianity took root in this corner of the world.

In this first stage, we will visit Kiev, the capital of Ukraine. Kiev is located along the Dnieper river, which flows southward to the Black Sea. It is a city with a rich and diverse history that can be seen through a variety of architectural styles.

Kiev is also famous for its numerous hills. In this stage, we will visit one of them. To reach the hill in question, we will walk up a road called Andrew’s Descent. This is a famous mediaeval cobblestone road, popular for its street vendors. It climbs from one of the main suburbs of the city, Podil, to the top of the St. Andrew’s Hill. There we find a magnificent cathedral which was again named after St. Andrew. The cathedral is a colourful baroque building designed by the Italian architect Bartolomeo Rastrelli.

To understand the significance of this location, we will first take a quick look at the early history of Kiev. For most of the first millennium, Christianity didn’t make significant progress here. Instead, Kiev faced several invasions from pagan tribes; mainly from the Khazars, a tribe from Central Asia, but also later from the Vikings from Northern Europe.

St. Andrew’s Hill is probably one of the best symbols for the adoption of Christianity in Eastern Slavic lands.

There are actually two stories related to this place. Both of them are told in the Chronicle of Nestor, which is also called the Tale of Bygone Years or the Primary Chronicle, and is one of the oldest Eastern Slavic manuscripts. It was written by a monk named Nestor around the year 1113, most probably in the Pechersky monastery, which is located on a neighbouring hill along the river. Historians have often contested the veracity of the events told in the Chronicle. But although the stories I am about to relate have not been proven true, neither have they been proven false. Be that as it may, they can help us understand how Christianity took root here.

The first story is connected to the man whose name is found in many places on this hill: the apostle Andrew himself. According to the Chronicle, Andrew was traveling along the Dnieper towards the North to preach the Gospel in the deserts of Scythia in modern-day Central Russia and Kazakhstan, in the first century AD.

When Andrew arrived at the top of this hill, he planted a cross right at the location of St. Andrew’s Cathedral. Then, according to the Chronicle, he prophesied the following words : “On these hills shall shine the light of Divine Grace. There shall be a great city, and God shall have in it many churches to His name.”It took nine hundred years for this prophecy to begin to see its fulfilment.

And this brings us to the second story. In the ninth century, Kiev was only a small village on the top of this hill, and the local Slavic inhabitants were under the rule of the Khazars. At that time, a tribe of Vikings, also called the Rus’, was living near Lake Ladoga in the North of modern-day Russia. And they began to invade lands in the South.

According to the Chronicle, a leader of the Rus’ named Rurik sent two men called Askold and Dir to Constantinople, most probably to invade the city. Askold and Dir journeyed southward along the Dnieper. When they arrived in Kiev, they attacked the Khazar rulers and took control of the village. Askold and Dir thus became princes of the Kievan Rus’, a territory that would later cover most of European Russia.

Askold and Dir then took an army to invade Constantinople, which was the heart of Eastern Orthodox Christianity at the time. There they met Patriarch Photius, and, instead of invading the city, it could be said that the city invaded them, since they returned to Kiev as newly converted Christians. Askold and Dir were the first Rus’ rulers to adopt Christianity. Nevertheless, their conversion didn’t provoke a quick and peaceful transition of their principality to Christianity. Oleg the Seer, another Rus’ ruler who had invaded the region of Novgorod, murdered the two princes because of their faith. And history tells that it still took another century of instability before Christianity was finally firmly rooted in the area.

So, what can we learn from these two stories?

Firstly, we can see that the adoption of Christianity in Eastern Slavic lands was greatly influenced by the Church of Constantinople. Secondly, we find out that the reported prophecy of St. Andrew really did come true, as Kiev actually became the capital city of the principality and has numerous churches to this day.

Even the Soviet regime could not wipe out the Christian presence in this city. In fact, the largest churches in Europe are presently located in the capital of Ukraine.