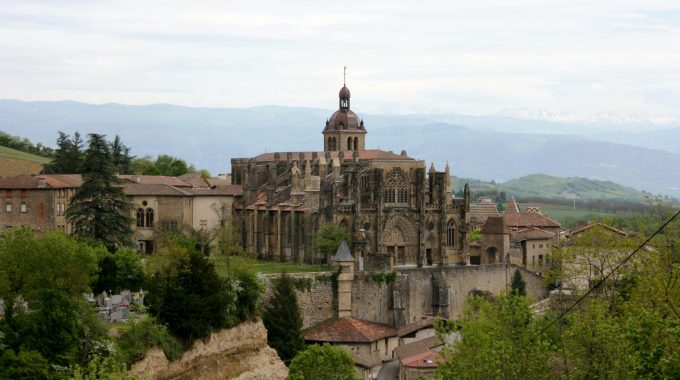 Christian monasticism is certainly the most influential movement that has shaped our Western civilisation. But even though it became predominant in mediaeval Europe, the fathers of monasticism actually came from outside the Old Continent.

During the next stages, we will explore some of the people known as the Desert Fathers who, without having ever lived in Europe, became highly influential in setting the course of European history.

Today we will visit a French village called Saint-Antoine-l’Abbaye in the region of Dauphiné. It is located east of the Rhône river, 40 kilometres north-east of Valence and 80 kilometres south-east of Lyon. The village lies in a hilly area near the Vercors National Park and the mountains of Lans, at the start of the French Alps.

Even though Saint-Antoine-l’Abbaye has only a thousand inhabitants, it is noticeable for its huge abbey placed on a hill overlooking the mediaeval village. Among other buildings, there is a Gothic church in the abbey. Inside it, we discover a monument surrounded by four statues representing the same person. It is a monument in honour of Anthony of the Desert or, more simply, Anthony the Great.

It is interesting to find Anthony honoured here because, as an Egyptian monk, he never lived outside his homeland. But before we explore why we find his name in this region of Dauphiné, over 3000 kilometres from Anthony’s native land, let’s first explore who he was and how he received the undisputed title of Father of Monasticism.

Anthony was born to wealthy parents in a small village along the Nile called Coma, in 251 AD. By the age of 20, however, Anthony had lost both of his parents and inherited their wealth. Around the same time, he heard a sermon with the piercing words of Jesus: ‘If you want to be perfect, go, sell your belongings and give to the poor, and you will have treasure in heaven. Then come, follow Me.’

Anthony was moved by this sermon and took Jesus at his word. He sold his large land along the Nile, gave his wealth to the poor and moved to the Western desert towards Libya. There he began to live as a hermit, seeking to live a life centred on God. According to historical accounts, the first years in the desert were a place of struggling against the devil’s temptations, but Anthony learned to overcome them through prayer, fasting and also corporal self-punishment.

After fifteen years, Anthony moved to an even more remote area on the other side of the Nile and settled in the ruins of a castle on a mountain in Thebaid. But there, instead of living alone as he had intended, several people, including other hermits, came to listen to the wisdom he had acquired through the years.

Anthony also prayed for and healed the sick, which attracted even more people to visit him from distant lands. He also engaged in debates with Neo-Platonic philosophers who challenged his faith, but his robust arguments in defence of Christianity won the philosophers over. Some of them even became his disciples.

With an increasing number of people gathering around him, Anthony decided to found the first community of what became known as Cenobitic monasticism, that is monasticism of the common life. Anthony instructed his disciples to live a life of worship to God with prayer and work.

Anthony also travelled to Alexandria in order to encourage the Christians who were then facing persecution. Later on, he returned to the city to preach and expose the growing heresy of Arianism, which claimed that Jesus was not God.

Around the same time, a young man named Athanasius came to learn from him. Later on, Athanasius became the key defender of historical Christianity against Arianism in the Council of Nicaea in 325 AD. Many realised the key role that Anthony had played in training his pupil. Unsurprisingly, the old Egyptian monk was then proclaimed to be ‘the bulwark of orthodoxy, the light of the world.’

The fame of Anthony spread all across the Roman Empire and even reached the Emperor Constantine who wrote letters to him in which he addressed the old monk as ‘father’. Anthony didn’t really enjoy his popularity, however, and after stating that ‘the fish die when they are drawn to land, and the monks lose their strength in towns…’ he decided to ‘return quickly to (his) mountains, like fish to the water.’ There he lived many more years and finally died at the good old age of 100.

So finally, let’s answer our initial question: why is Anthony honoured here in this French village?

Several centuries after Anthony’s death, Egypt was invaded by the Muslims. Fearing that his bones would be destroyed, some Christians sent them to the capital of the Christian Byzantine Empire, Constantinople. Then, in the eleventh century, a knight called Jocelin, who, it is told, was healed through the bones of Anthony, asked the emperor if he could bring them to his homeland of Dauphiné. The emperor accepted and Jocelin brought the bones to the place where the monument now stands, in the church of Saint-Antoine-l’Abbaye.

Anthony’s life has been a source of inspiration ever since in Europe, and can continue to be so for the future, even in our secularised societies.

https://soundcloud.com/aeuropeanjourney/a-european-journey-71-tarragona-spain Christianity in Spain is often associated with the bloodshed of the Inquisition. While this…

https://soundcloud.com/aeuropeanjourney/a-european-journey-11-wicklow-ireland Patrick and the transformation of Ireland After Ukraine last week, we will visit the…