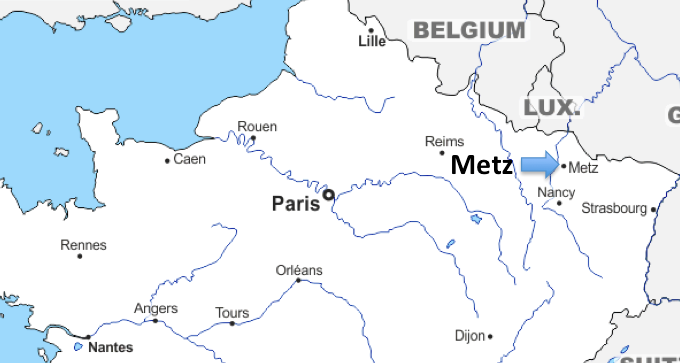 We continue our mini-trip in the footsteps of the Waldensians in pre-Reformation times. Today, we will again be in France but this time in the Northeastern city of Metz, located in the region of Lorraine.

The city lies on the banks of the Moselle river, which flows down to the Rhine in Germany. It is characterized by architecture that testifies of a Christian presence from early times. In this city we find the pre-medieval basilica of Saint-Pierre aux Nonnains, a Knights’ Templar chapel from the High Medieval times, several Gothic churches from the Late Middle Ages and several hotels from Renaissance times.

But to find traces of the Waldensians, we need to visit the city cathedral, which is dedicated to Saint Stephen. Its particularities include stained-glass windows of renowned artists, the most famous being Marc Chagall. Also, the nave of the cathedral is the third highest in France.

Metz was an important political centre in early Medieval times, as it was the capital of both the Austrasian (6th century) and the Lotharingian (9th century) kingdoms. It became a Free Imperial City in 1189 and functioned as a Republic until the fifteenth century before being incorporated into the Kingdom of France.

At the time Western Europe functioned under the authority of the Pope, as he was the one to crown Emperors and Kings. Nevertheless, Metz was called a republic, because the city was ruled not by an emperor (crowned by the Pope), but by an oligarchy, which was a congregation of nobles.

Although Metz was not what we would call a democracy today, this form of governance gave the citizens more freedom than other parts of the Empire. Here, the Church seemed less able to control the city. Was the fearlessness of the nobles towards the Catholic church a fruit of the presence of the Waldensians? Although I do not know the answer to this question, Metz was definitely an excellent context for the Waldensians to live and function in relative freedom.

This fearlessness displayed itself in a specific event that took place in the city Cathedral at the end of the twelfth century.

One day, as the bishop named Bertram was celebrating mass, he recognized two Waldensians in the congregation. He had previously seen them being condemned in Montpellier, far in the South of France! From his pulpit, Bertram quickly gave the order to arrest them. But the people in the cathedral refused to obey him. Today we would call this an act of civil disobedience.

This event shows how the Waldensians enjoyed the protection of the local oligarchy from the schemes of the Catholic church. Under their protection, the Waldensians spread out translations of the Gospels, Paul’s Epistles, the Psalms and maybe some other Sacred Scriptures. This was remarkable considering that the printing press had not yet been invented. Their work succeeded in gaining the hearts of many influential people in the Republic. Later the Catholic clergy discovered their secret gatherings, but they simply could not stop them.

From Metz, the Waldensians sent out missionaries to surrounding areas. An example of their broad influence is seen in that some of their translations of the Scriptures were confiscated in Liège, Belgium. The situation became so uncontrollable that Pope Alexander III was soon informed about it. He was worried and asked the bishop of Metz to make an inquiry. But when Bertram questioned the nobles of the city concerning the Waldensians, many answered: only God is worthy of our obedience.

Now this is quite interesting for several reasons. As I said, the Catholic system was pyramidal and required obedience to the Pope. But in Metz we see the nobles applying something we today call freedom of conscience, which is a vital part of the Universal Declaration of Human Rights. In addition to this, since the nobles were declaring that owed their obedience to God, they were also stating that all (authorities included) owed equal obedience to Him. And this meant that people could disobey their authorities in order to obey God. We can see here that freedom of conscience, which is taken for granted today, is actually a fruit of the biblical understanding of obedience to God above all else. There is no other basis for this freedom to exist.

But let’s go back to our story: What happened after Bertram’s unsuccessful inquiry?

The Pope sent some of his monks to Metz to burn their translations of the Scriptures. Later on, Rome even launched a crusade in the region, which was similar to the one we spoke of last week in the South of France. But even with such endeavours, Rome did not succeed in eradicating the Waldensian movement from the city.

Next week, we’ll discover how their movement provoked more dramatic events in other cities.