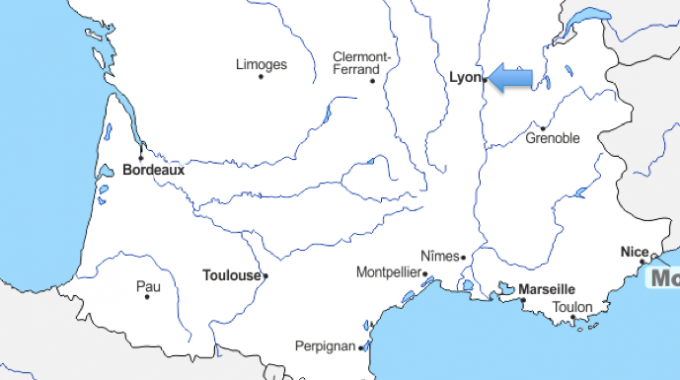 This week we are going to visit the third biggest city of France, Lyon. The city is located at 150 km South-West from Geneva which we visited during stage two.

The river Rhône flows through both cities. But the similarities don’t stop here. While Geneva is known for the Calvinist Reformation of the 16th century, Lyon saw the start of another Reformation four centuries before – and this is what I will talk about today.

Founded as a Roman settlement around the 1st century BC, Lyon contains architectural testimonies of several centuries of history, such as the theatre from Roman times or several medieval churches.

For this episode, we are going near one of those churches: the Eglise Saint-Nizier. As we walk behind the church, we arrive in one of the main streets of the suburb: the rue du Président Herriot. Then, walking 50 m South, we reach a crossroads with the rue de la Poulaillerie.

The Rue de la Poulailleriehas actually had different names in the past. One of them was Rue Maudite, or the cursed street. Why on earth such a name? This was in memory (if I can say) of one of the most famous reformers in medieval history who had lived right here. I’m talking about Peter Waldo.

Who was he? And why did he inspire such a name for this street?

Born in 1140 in an unknown location probably in this region, Waldo lived near the church as a wealthy merchant. This was not abnormal in Lyon as the city was, in fact, an important trade centre between Northern and Southern Europe. While Waldo might have been influenced by Henry of Lausanne, another early Reformer, he didn’t live a very pious life, at first.

One day Waldo was with one of his friends who died suddenly just near him. This was a sort of electric shock for Waldo as he wondered: “Where would I be now if it had been me instead of him?” Later on he went to visit a master of theology and asked him: “Of all the ways that lead to heaven, which one is the safest?” The master answered, quoting Jesus: “Go, sell everything you have and give to the poor, and you will have treasure in heaven. Then come, follow me.” (Mark 10:21)

We remember that Jesus gave this answer to a rich man that had asked a question similar to Waldo. But while the rich man of the Bible left saddened, Waldo chose to apply Jesus’ words literally.And so to his wife’s despair, he sold all his belongings. With the money he gathered, he first repaid those he had fooled as a merchant. He also paid a dowry for his daughter to enable her to enter into a famous monastery in the province of Anjou.

But even after this, Waldo still had great wealth left over. It didn’t take long for him to know what to do with it, however. In that very year (1173) a severe famine hit the city of Lyon. And so, from Pentecost to mid-August, Waldo distributed bread, meat and other things. As people gathered regularly around him, he preached the Word, emphasizing that no one could serve both Mammon and God at the same time. Waldo also paid clerics to teach him the gospel and to translate the Bible into Romance (or Franco-Provençal), the language widely spoken at the time in the region.

Soon however, resistance began to arise against him. The fact that he was a lay preacher was seen as a problem, because at the time only clerics were allowed to preach. And so Peter Waldo travelled to Rome with a close associate named Vivet in order to convince pope Alexander III of what the Bible calls the priesthood of all believers. Sadly their meeting with three members of the Roman Curia in January 1179 was inconclusive. Two months later, the Third Council of the Lateran officially condemned lay preaching.

Facing the dilemma between obeying the pope or the Bible, the Waldensians (that is the disciples of Waldo) chose the Bible. At the time the church was fighting the Cathari in Southern France, another movement they considered as heretic, and so the Waldensians knew the price that they would have to pay for their faith.

And indeed, after the death of Alexander III in 1181, pope Lucius III (of which we spoke a bit during the first stage) intensified his fight against the identified heresies of the time, the Catharis, the Waldensians and other movements. Around the same time,Jean Belles-Mains (John ‘beautiful hands’), who had successfully fought the Catharis in Toulouse (South-West of France), became Archbishop of Lyon.

All these developments led Waldo and his disciples to be expelled from the city and forced them to seek refuge in the mountains of Piedmont (modern-day Italy) where the Waldensians are still present to this day. This is also probably where Waldo died.

Nevertheless the Waldensian movement didn’t die with its initiator. The main characteristics of the movement became voluntary poverty, lay preaching and strict adherence to the Bible. In the next centuries, the Waldensians sent missionaries all over Europe to preach the Gospel. Their doctrinal emphasis also strongly influenced the social life of the continent. In addition to this, the Waldensians became a source of inspiration for later Reformation movements such as the Hussites in Bohemia and obviously the Lutherans in Germany.

Waldo was cursed by the medieval Roman Catholic church. Today he isa forgotten figure in secularized Lyon. Nevertheless, his legacy lives on, not only here but also all across the continent.

https://soundcloud.com/aeuropeanjourney/a-european-journey-34-passau-germany Last week we were in Merano to discover the story of Valentine, the missionary…

https://soundcloud.com/aeuropeanjourney/a-european-journey-59-krk-croatia Christian missionaries did more than just bring the faith to the Slavic people. They…