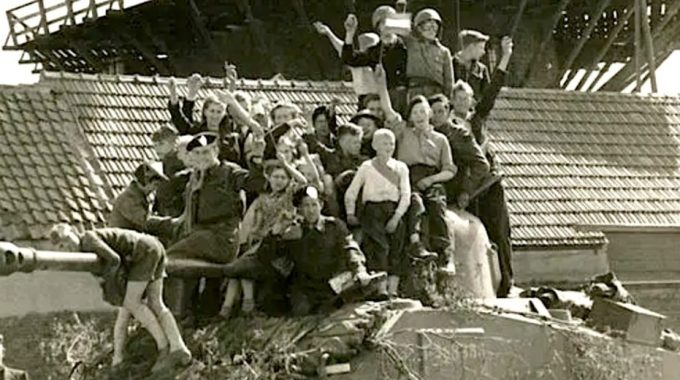 This week, Europeans celebrate the end of the Second World War seventy-five years ago in different ways. For some, like the British and the Russians, it is celebrated as victory. For others, as liberation by the Dutch, Belgians and the French. Yet for others, it marked the sad trading of one occupier for another – as for those in the Baltic states and Central Europe. Liberation would wait another forty-five years for those Europeans.

Today is Remembrance Day in The Netherlands, with a televised ceremony this evening following the royal couple walking across an empty Dam Square to lay wreaths on the war monument. Tomorrow, Dutch Liberation Day, celebrations again will be down-scaled by the current circumstances. Perhaps the restricted conditions we find ourselves in help us appreciate the challenges our parents, grandparents and great-grandparents faced.

Too often we forget that Hitler’s demise did not automatically guarantee peace to a traumatised and broken Europe. Euphoric scenes of Allied soldiers giving out chocolates, cigarettes and kisses to flag-waving crowds quickly gave way to the daunting reality of rebuilding a devastated and divided Europe. It’s one thing to win a war. But how do you win the peace?

Chaos threatened on all sides. Hatred and bitterness towards the enemy and collaborators poisoned grass-roots attitudes among victor and defeated alike. Families had been separated, divided and destroyed. Deep wounds festered physically, psychologically and spiritually. Hunger, poverty and unemployment added to the miseries of injury and upheaval, totally eclipsing anything we are currently experiencing in Europe today. The Cold War was about to begin. Today’s generations have never known the climate of mistrust and suspicion, crisis and conflict that dominated Europe over the five years following the war.

Reconciliation
Today thoughts of such conflict among EU nations are unthinkable, thank God! Thanks in large part to the story of the stunningly rapid yet lasting Franco-German reconciliation after the Second World War. Central to that story is an unassuming, French lawyer-politician, acknowledged as the ‘Father of Europe’, Robert Schuman. Drawing inspiration from his Christian faith and Catholic social teaching, he searched for an alternative to the old order of competing nation states which had repeatedly led to war. Even while imprisoned by the Nazis early in the war and again after escaping in hiding, he wrote that ‘we French will have to learn to forgive and love the Germans to rebuild post-war Europe’. To many that sounded like treason. After the war, when appointed Foreign Minister, Schuman kept looking for a way to prevent the vicious cycle of war.

Exactly seventy years ago on this Saturday, on May 9, 1950, Schuman announced a plan in a speech lasting a mere three minutes. Surely that was the defining moment of post-war Europe! For that speech laid the foundations of the European House in which today half a billion people in twenty-seven nations live together in peace. From that moment on, there was a plan on the table with the goal, in Schuman’s thinking, of forming a ‘community of peoples deeply rooted in basic Christian values’. These values stemmed directly from the teachings of Jesus, Schuman argued. True democracy was ‘evangelical’, he wrote, rooted in the gospel, embedded in the dignity of each person created in God’s image, and in the moral equality of humans.

Interdependence
May 9 has since been officially recognised as the birthdate of the European Union and is celebrated (or ignored) as Europe Day across the member nations.

We remember the sacrifices made to end the war. We celebrate the recovery of freedom. We should also affirm our connectedness and interdependence while enjoying our own unique national identities. Just as humans need a healthy autonomy, we also need connectedness. Especially in these days of misguided nationalism, xenophobia and growing authoritarianism, we should express gratefulness for belonging to the diverse European family of peoples. On the website www.may9.eu, we suggest many ways we can celebrate Europe Day as ‘Together for Europe Day’, or ‘Interdependence Day’, or ‘European Family Day’: a multi-cultural meal, watching films or viewing on-line art from other countries. Be creative!

We can join events planned in different nations but adapted to online as in Graz, where Austrians, Slovenians, Italians, Hungarians and Croatians will connect via internet; or in Utrecht where an online forum will debate future scenarios for Europe.

Let me invite you to an online State of Europe Forum, originally planned for this weekend in Zagreb, starting Saturday at 6pm, exactly to the hour seventy years after Schuman’s ‘bombshell’ speech. Guests from eight countries–politicians, academics and practitioners–will discuss the significance of May 9, Schuman’s role, the state of a Europe today in corona crisis, and what we still can learn from the ‘Father of Europe’ as we prepare to rebuild a post-corona Europe.

The liberation of Europe

HERE'S A QUICK TEST: think of a spiritual leader. OK, ready? What occupation does he…

Who was the last pop star you heard of who converted to Islam? Cat Stevens?…