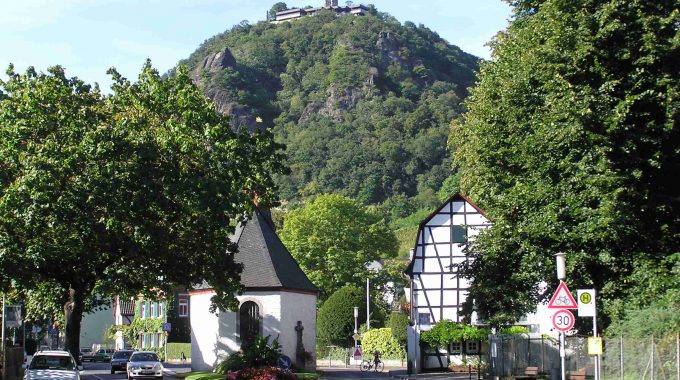 In the 1930s, the Nazis rose to power in Germany. And yet, two decades later, they had nearly disappeared. What brought such a dramatic change to Germany? Perhaps one of the decisive factors behind the change was the Christian faith of a German statesman called Konrad Adenauer.

So, to discover more about this statesman, we will visit Rhöndorf in Germany. Rhöndorf is located less than 15 km South from Bonn, the former capital of the Federal Republic of Germany. The name Rhöndorf simply means village on the Rhine. Quite logically, we are, in fact, on the right bank of the Rhine, in the Siebengebirge area (Seven Mountains area).

The location we are visiting is a beautiful white house overlooking the river. This house used to be the residence the former German Chancellor Konrad Adenauer. At present, it is a museum dedicated to his life and political career.

The Adenauer family had moved to Rhöndorf in the 1930s. Without realising it at the time, this home turned out to be the perfect location for Konrad Adenauer, especially when Bonn became the capital of West Germany after the Second World War. In addition to being located at an easy distance from the capital, here he could find restoration in the heat of his demanding job.

Konrad Adenauer is known to be the most influential man behind the rebirth of Germany after World War II. But what is less known is that it was primarily his Christian faith that motivated his political decisions. However, before we explore this aspect, let’s first take a quick look at his biography.

Konrad Adenauer was born into a Roman Catholic family from Cologne in 1876. He studied law and politics at the universities of Freiburg, Munich and Bonn and graduated in 1900. After having worked for a short period in a bank, he joined the Roman Catholic Zentrumspartei (Centre Party) in 1906. In 1917, he became the mayor of Cologne, a position that he held until 1933, when the Nazisforced him to step down. Sadly, his sufferings were not limited to his political career. In 1904, Adenauer married Emma Weyer but she died in 1916. Then in 1919, Adenauer married Gussi Zinsser but she also died, in 1948. After the death of Frau Gussi, Konrad Adenauer became the Chancellor of the newly created Federal Republic of Germany in 1949. Regardless of his advanced age, Adenauer held the office for fourteen years.

So how did Adenauer’s Christian faith influence his political decisions? Although there would be much to say about this topic, I will explore three specific points.

Firstly, Konrad Adenauer succeeded in uniting Roman Catholics and Protestants in the political arena. This was not an easy task. When Adenauer first proposed to open the Zentrum party to the Protestants, he was met with vehement opposition by the Roman Catholic hierarchy. This was quite understandable, for in 1815, the predominantly Roman Catholic Rhineland had been incorporated into the Protestant kingdom of Prussia. The Prussians had sought to centralise power in Berlin, with little consideration for the Roman Catholic lands, although this area represented a third of the country. Adenauer sought unity among the Christians because he knew that godless ideologies had begun to grow in Germany. He understood that forgiveness and reconciliation between Protestants and Catholics were an absolute necessity if Christians wanted to remain influential in the politics of the country. A united Christian political force would be able to overcome these threats. Unfortunately, the Roman Catholic refusal probably contributed to the rise of the Nazis. After World War II, Adenauer finally succeeded in gathering Protestants and Catholics under the newly created CDU, which became the driving force of post-war Germany.

Secondly, Adenauer’s Christian approach to policy was also crucial to defeating Nazism. Even though he had greatly suffered at the hands of the Nazis, Adenauer advocated for an amnesty law for those who had formerly served in the Nazi regime, except for the most radical cases. Again his idea was first met with opposition. This time it came from the Allies who preferred the so-called ‘denazification’ process, which meant punishing anyone who had collaborated with the regime. Adenauer believed that such a process would only help to rebuild Nazism in Germany. Finally the Allies agreed with Adenauer’s position, and his policy of amnesty contributed greatly to the pacification of Germany after World War II.

Thirdly, Konrad Adenauer Christian faith could be seen in how he sought to build a stable future for Germany. For this sake, he opposed to the German reunification just after World War II. This may seem surprising at first, but he understood that this option would have lead to the Soviet takeover of Germany, and probably of Western Europe as well. Adenauer believed that West Germany should be allied with the Western democracies, even though he knew this would mean losing East Germany. Such an alliance would create a prosperous and free West Germany which would ultimately become, in his own words, ‘a magnet that would eventually bring down the East German regime’. Even if he didn’t live to see it, history shows that Adenauer chose the right path.

Finally, as was the case with Robert Schuman, the faith of Konrad Adenauer greatly eased the reconciliation process between Germany and France, which was at the heart of the birth of the European Union.

https://soundcloud.com/aeuropeanjourney/a-european-journey-33-merano-italy Today we will visit Merano, an Italian town in the region of South Tyrol.…