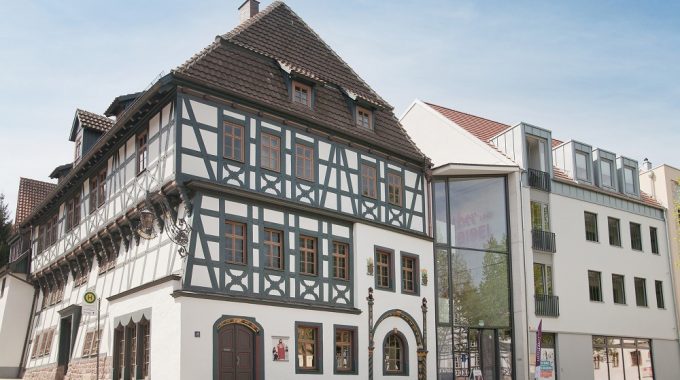 ‘Meine lieben Stadt!’, which means ‘my beloved town’. This is how Martin Luther referred to the town of Eisenach. And there were good reasons for it, as he found unexpected help in times of crisis here twice in his life.

So, as we continue tracing Martin Luther’s early life, we will visit Eisenach today. Although Eisenach is a relatively small town, it is not only connected to Martin Luther, but also to Johann Sebastian Bach who was actually born here (stage 16).

The exact location we are visiting today is actually near the Bach Museum which is located on the Frauenplan. From this square, a narrow cobblestone street called Lutherstraße leads us to the Lutherhaus Eisenach 250 metres away. This beautiful house is actually one of the oldest half-timbered houses still standing in the region of Thuringia.

The Lutherhaus Eisenach stands as a witness to the first episode of Martin Luther’s life in Eisenach. But what were the circumstances that brought him here?

In our last episode, I mentioned the difficult year that Martin Luther spent in Magdeburg, where he attended the notorious cathedral school of the city. The poor financial situation of Martin as a fourteen year-old had forced him to beg for bread in the streets, with other poor children. When his parents Hans and Margaret, who were still living in Mansfeld (stage 82), heard about the hardship their son was facing, they decided to send him to Eisenach, where he arrived in 1498.

The choice of Eisenach seemed logical. Although the Saint George parochial school of Eisenach was less prestigious than the cathedral school of Magdeburg, it still had a good academic level. Moreover, Hans Luther, who was born in a village nearby, still had several family members living here. But for some reason, the family members in Eisenach didn’t provide the help he needed. And so, here too, Martin ended up resorting to a practice that was common to poor children in Germany at the time, that is singing from house to house for money and bread.

As we can imagine, Martin Luther didn’t always get the help he needed. Time and again, he received insults rather than bread. We can imagine that in such a harsh situation, he might have considered abandoning his studies and returning to Mansfeld to work with his father. In other words, Luther needed a miracle.

Such a miracle finally happened one day as he was walking on the square by the Sankt Georg Kirche. There a wealthy lady called Ursula Cotta, the wife of Conrad Cotta, the burgomaster of Eisenach, came to him. As a devout believer, she had already seen him singing regularly at church and had also noticed the hardship he was facing. Moved with compassion for Martin Luther, she invited him to her home, which is believed to be the Lutherhaus that we are visiting today. There she began to care for his needs. Thanks to her benevolence, Lady Ursula is remembered as the Shunammite of Eisenach, as a reminder of the Shunammite lady that had helped the prophet Elijah in times of famine.

Thankfully, Conrad Cotta was also a generous man, and when he realised that his wife had taken this teenager under her wing, he decided to allow him to live with them until the end of his studies. Finally, Martin Luther’s season of hardship had reached an end.

Now that his living was provided for, Martin Luther could focus on his studies. Here in Eisenach, he studied arts, literature, science, and also learned to play the flute and the lute, two instruments which he would later use to accompany the singing of his hymns, most of which can still be found in the hymnals of Lutheran churches around the world.

There is one interesting anecdote that is worth mentioning about Luther’s schooling in Eisenach. One of his teachers was a man named Febronius. The teacher treated his pupils with high respect which was in stark contrast to the attitudes of the time. Puzzled by this, his colleagues asked him the reason for his behaviour. Febronius answered that he saw in each of his pupils a possible future burgomaster, chancellor, doctor or magistrate. Little did he know that one of them would become the father of the Protestant Reformation that transformed Europe and is still having an impact around the world.

Three years after his arrival in Eisenach, it was time for Martin Luther to move on again. This time he leftfor Erfurt, where he enrolled at the university’s Faculty of Law.

Two decades later, Martin Luther returned to Eisenach at a moment that was even more critical than the times he had experienced as a teenager. In May 1521, Luther, who had refused to renounce his views in favour of a reformation of the Church, was abducted by armed horsemen and brought here to the Wartburg Castle, which overlooks the town. In reality these men had just saved Luther’s life by hiding him from his enemies who sought to kill him. It is also interesting to note that it was here that Martin Luther translated the New Testament to German. But, God willing, this will be the theme of a future stage of A European Journey.

It is understandable that Martin Luther called Eisenach his lieben Stadt. It was here, more than anywhere else, that he experienced the practical Providence of God.

See you next week else somewhere in Europe.

I dedicate this article to Michel & Paola Broos who, at some period of my life, have been a kind of Cotta family to me.