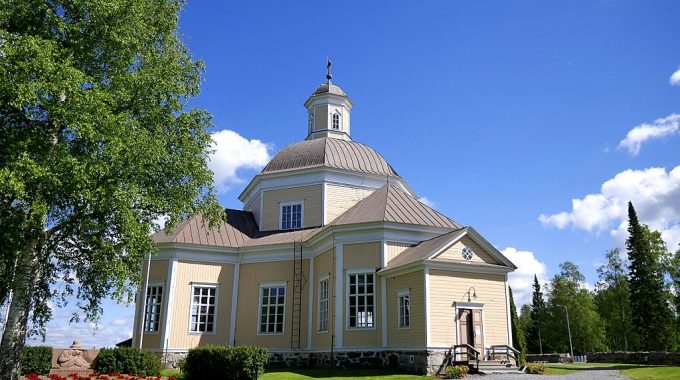 A hostile climate didn’t keep Finland from improving its living conditions and becoming one of the most thriving democracies on earth. But what made this achievement possible?

To find a clue, we will visit a small village in the region of Ostrobothnia near the Baltic Sea called Nedervetil in Swedish and Alaveteli in Finnish. The reason it bears a bilingual name is that this is an area with one of the biggest concentrations of Swedish-speaking Finns.

Alaveteli is surrounded by flat fields and crossed by a river called Perhonjoki. From the centre of the village, we will take a road along the river towards the South. Half a kilometre further, we discover a wooden parish church built in 1753 (see picture). And if we continue a little more than a kilometre and cross the bridge over the river, we reach a country house on the left side of the road.

In the yard surrounding the house, there is a memorial stone with the following Swedish words: “Here was the parsonage in which the first priest of Nedervetil, Anders Chydenius, lived between 1753 and 1770”.

This man, Anders Chydenius was actually one of the most influential churchmen and politicians of Finland in the eighteenth century. He bought this land, which he described asa ‘barren and stony ground on the banks of a waterfall’, in order to build the parsonage where he could live as the local priest.

But who was Anders Chydenius and what was his influence on Finnish history?

Anders Chydenius was born in the village of Sotkamo, in Eastern Finland, where his father was also a priest. And from his early life, Anders moved around many parts of the country: first to Kuusamo, in Lapland, where his father became the parish rector; then to Oulu, along the Baltic coast, where he attended grammar school; then to Tornio, at the top of the Gulf of Bothnia near the border with Sweden, where he was educated privately; and then to Turku, in South-western Finland and finally to Uppsala, in modern-day Sweden, where he was a university student.

After his graduation in 1753, Anders Chydenius was appointed priest of the parish of Nedervetil/Alaveteli where we are today. Although he lived in an era when the basic doctrines of the Reformation began to be neglected through the influence of the Enlightenment, Anders Chydenius was strongly influenced by Pietism, a Lutheran theological movement which emphasized personal piety.

Pietism was foundational to Chydenius’ struggle for the freedom of the individual in Finland. But to achieve this freedom, he knew that the living conditions of the people had to improve. This is what he began doing right here in his parsonage.

Chydenius used new agricultural techniques suitable for a challenging land. Here he grew vegetables and cultivated a garden. He built a dam to use the water to irrigate his land. He drained the swamp nearby and turned it into a cultivable field. He also kept sheep, rams, goats and horses and found ways to care for them in this difficult climate. His special care for his sheep enabled him to produce some of the finest wool in the entire Kingdom of Sweden. And for the production of food and drink, Chydenius built a baking room and a brewery.

Chydenius was especially concerned for healthcare, particularly for children. He studied the writings of another Swedish Pietist, Nils Rosén von Rosenstein, who was the father of modern paediatrics. This enabled him to develop his skills as a physician so he could cure his parishioners. He gave them vaccinations against smallpox, a disease that killed many in his time. He also performed eye surgeries and built a laboratory in which he developed new remedies.

The influence of Anders Chydenius also reached the politics of Sweden, which still ruled over Finland. In his time, the kingdom was transitioning from an autocratic rule to the Riksdag system, a precursor of the modern-day parliamentary system. Anders Chydenius served several times at the Riksdag in Stockholm and became Finland’s most influential representative.

His political role allowed him to defend many ideas that were new in his time and that would later have an impact worldwide. Let me mention only three of them:

Firstly, Chydenius advocated for free trade and wrote a pamphlet developing the same ideas written by Adam Smith in his The Wealth of Nations ten years later. Chydenius obtained navigational rights for the cities of Kokkola, Vaasa, Pori (Björneborg) and Oulu (Uleåborg). This was foundational for the development of free trade and greatly improved the economy of both the region of Ostrobothnia and of Finland as a whole.

Finally, Chydenius championed universal rights and promoted the abolition of privilege. He was one of the rare politicians of his time to believe in the necessity of equal opportunities for rich and poor alike. This idea of equality became foundational for the development of the nation of Finland.

In 1770, Anders Chydenius became parish rector in Kokkola where he lived until his death in 1803. Contrary to the Enlightenment philosophers, Chydenius didn’t reject Christianity and the Bible but rather drew inspiration from it.