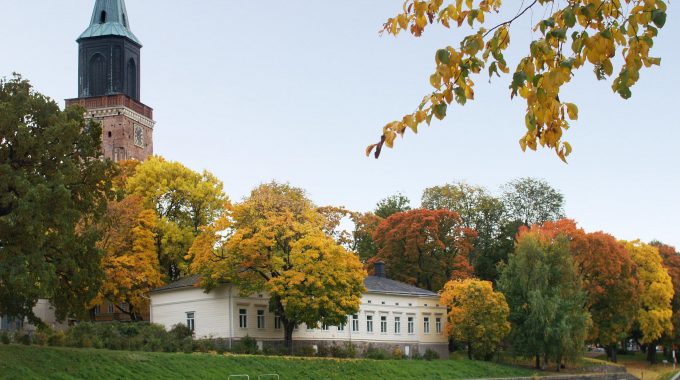 The Finnish education system is recognized as one of the best of the world today. And yet, a person from the 17th century would consider this to be nothing short of a miracle.

So how did Finland become one of the most educated nations in the world?

To explore this, we will continue our journey in Turku where we were also in our last episode. Actually we will only have to walk 100 meters towards the cathedral from where we finished last week. After crossing a street called Uudenmaankatu, we arrive in another park. There, halfway between the Porthan monument (see stage 47) and the statue of Mikael Agricola(see stage 23) stands another statue of a man wearing a hat similar to that of the Musketeers. This statue is not in honour of D’Artagnan, however, but rather of a Swedish man named Per Brahe.

This monument was inaugurated in 1888 and was built by the Finnish neo-classical sculptor Walter Runeberg, the son of the nationally famous poet Johan Ludvig Runeberg.

But who was Per Brahe and what was his contribution to Finnish education?

Per Brahe was born in Rydboholm Castle near Stockholm. He became a successful soldier who fought in the Polish War in Prussia. After his military campaigns, he pursued a political career and in 1637, aged 35, he became Governor General of Finland, which was then a Duchy under Swedish rule.

The Reformation was not simply a return to the doctrine of salvation by faith alone. Among its main principles were the preaching and teaching of the word of God in the language of the people. Also, Luther wanted to reassign the wealth of the church to schools and universities.

The Reformation was put into practice more quickly in Sweden than in Finland. In theory, every Lutheran parish pastor was required to be well-educated. But in practice this was not the case. Even in Per Brahe’s time, more than a century later, the level of education in Finland was still very poor.

This situation moved General Governor Per Brahe to take action. He told the Swedish government that the Finnsweresimple people(read: uncivilized) and therefore he required that education in theology and matters of government be made available in Finland. The government accepted this and in 1640, the Royal Academy of Turku was founded just here near the park. Per Brahe became its first rector. From the beginning, the four traditional faculties were established: theology (as the most important one), law, medicine and philosophy.

The foundation of the Royal Academy of Turku was not the only event that triggered the development of education in Finland, however. Two short years after the foundation of the Academy, two significant events took place: the printing of the first Finnish Bible in Stockholm and the establishment of the first printing press in Turku. Very soon, the Bishop and vice-rector of the Academy in Turku, Isaacus Rothovius, ordered that each parish pastor should have a Bible in his local church.

However, these three events alone were not sufficient to spread education in the entire duchy. Although the pastors were now all educated at the Academy, the peasants were still mostly illiterate. The situation started changing 25 years later when the Bishop of Turku, Johannes Gezelius the Elder, published a textbook called Yxi paras lasten tawara (A children’s treasure-store). The textbook was divided in four parts: firstly, the ABC book written by Mikael Agricola; secondly, Luther’s Small Catechism; thirdly, a series of questions and discussions on the catechism and finally a portion entitled ‘Words of instruction from the Holy Bible’. Usually, the normal folk people learned at least the first two parts of the textbook.

Through Gezelius’ textbook, education became compulsory for every Finnish citizen. Once a year, the local pastors had to organise a general examination in the villages of his parish to assess both the level of knowledge of the catechism and the literacy of his parishioners. This meant that for nearly three centuries, it was thus impossible to live in Finland and not learn the catechism.

The early development of education in Finland was not simply aimed at developing skills such as reading or writing. The main reason was to shape the character of the people according to God’s standards as was taught in Luther’s catechism. This is how Finnish people learned not to steal, kill or cheat.

In the light of these developments, it is therefore not surprising that today, Finland is not only one of the most educated nations in the world, but also one of the least corrupted.