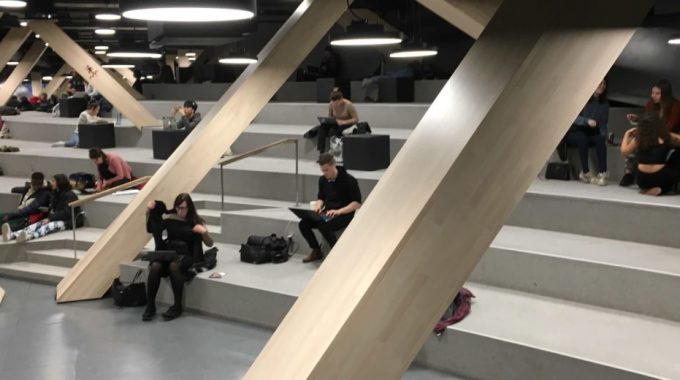 Bold and enticing, the innovative Helsinki Central Library is a ‘city living room’ for young and old, families and students, teens and grandparents with infants, hanging out together in contented ambience.

In the Finnish capital for the State of Europe Forum, I spent a rewarding afternoon on Friday reading in Book Heaven on the top floor of the library, one long extended reading and study space illuminated by reflected light from the undulating ceiling. Relaxing in a swivel chair, I looked out through the floor-to-ceiling windows onto the pillared parliament building opposite, where the day before I had breakfasted with parliamentary staff prior to a prayer meeting with members of the Christian Democratic party.

Completed two years ago to celebrate the nation’s centenary of independence, the library was itself a project in democracy and equality, so the information brochure told me, designed with input from locals. Everyone had the right to be there; hanging out in this ‘indoor town square’ without a reason was welcomed; and racism and discrimination were not tolerated in this space where everyone was respected.

In 2016 the UN recognised Finland as the world’s most literate nation. Finns are among the world’s most enthusiastic users of public libraries. Some 5.5 million Finns borrow close to 68 million books a year. And, according to the 2019 World Happiness Report, Finns are the happiest people on earth – for the second year running. This year, they share with Danes, Norwegians and Icelanders in the top four. The Dutch, Swiss, Swedes, New Zealanders, Canadians and then Austrians complete the top ten.

Was it a coincidence that nearly all these nations had Protestant backgrounds? When did the Finnish habit of reading begin? What lay behind Finland’s success?

These questions were put to Timo Laaninen, political advisor to three prime ministers and now a Lutheran priest, in one of the sessions of the State of Europe Forum, held in the historic Mission Church. His first response in hearing the outcome of the Happiness Report, he said, had been to scratch his head and wonder if something had been wrong with the happiness survey.

More seriously, he answered by starting with the Reformation. Without Martin Luther, there would have been no Finland as we know it today, he declared without hesitation. Mikael Agricola, the father of the written Finnish language, studied in Wittenberg under Luther and Philipp Melancthon before returning to Finland to teach in Turku.

At that time, Sweden controlled Finland and Swedish was the official language. Agricola created a spelling book in Finnish, understanding how important it was for Finns to learn to read in their own language and to know about their own history and culture. He published a prayer book including prayers by Luther and Erasmus in Finnish, and translated the New Testament from Greek to Finnish, a twenty-year labour. Everyone should be able to read the Word of God in his or her own language, he believed. His New Testament preface included a history of Christianity in Finland, and also of the Swedish occupation of his country. Later he translated the Psalms and key Old Testament passages, with a preface listing the old gods of Finland.

Agricola’s role in making the Finns an independent people is remembered each year by a national day on April 9.

A second factor in the shaping of Finland, continued the former Centre Party secretary, was the role of the church in Finland as the most important administrative structure for education and healthcare, with democratic involvement of people at the local level promoting a high level of equality, compared with other European nations.

Yet a third major influence had been the revival movements of the nineteenth century, said Timo, with lay leadership and little control from the official church. These movements promoted an ethos of good citizenship and influenced Finland’s celebrated education system which by 1866 offered free education for all, including poor students and those without Finnish as a mother tongue.

Today many countries are closing libraries. Britain, for example, has closed 478 libraries since 2010 and spends €16 per head annually on libraries. By comparison, Finland spends €55 per citizen and has just spent €100 million on this latest monument to a literary legacy dating from Agricola and his promotion of Bible reading in the Finnish language.

I was leafing through a book on 'chaos theory' in a library once, and discovered…

This time last week no-one knew who the new pope would be. Suddenly on Tuesday…

Making war impossible – The story of Schuman (Part I)

From Jeff Fountain's book Deeply Rooted. The last passengers were boarding the Paris-Metz train at Gare…