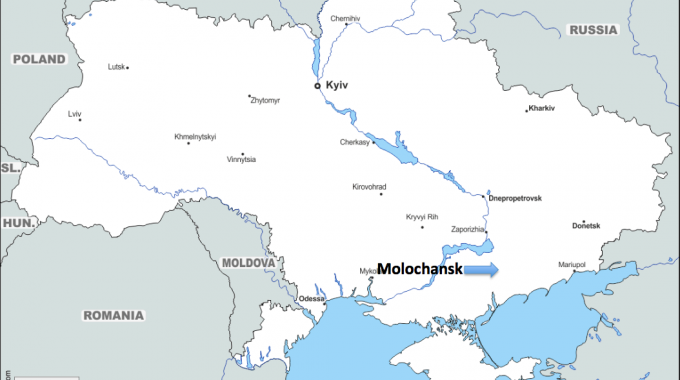 After England last week, we will now travel to a small city of Ukraine called Molochansk. It is located at slightly over 600 km South-East of the capital Kiev and less than 100 km from the Sea of Azov. The city lies near the Molochna river. We are in a particularly flat area famous for the steppes which extend as far as Manchuria.

A walk through the city takes us to discover some buildings such as the Schröder palace or the German school. And as we look into the history of the city we discover that it even had a German name in the past, Halbstadt.

These indicators reveal that this place was once populated by Germans. But who were they and why were they here?

In this episode we will discover the fascinating story of this place. Halbstadt is actually related to the Radical or Anabaptist Reformation. This Reformation began in the same century as the most famous reformation, namely the Lutheran one.

Although it is unclear where the movement began, Switzerland and the Netherlands were among the first nations. One of the particularities of the movement was the understanding of baptism as being a simple testimony of the true conversion of the person. For this reason they refused to baptise children, which was quite radical at the time. Theological differences of this kind quickly led to persecution by both Catholics and Protestants.

The first Anabaptist martyrs were killed in Switzerland and in the Netherlands (that is modern-day Netherlands and Belgium) in the 1520s. This actually succeeded in attracting more followers to the movement. One of them was a former Dutch Catholic chaplain, Menno Simons who rose to become a prominent Anabaptist leader.

The name Anabaptist however began to carry a negative connotation due to groups who while claiming to belong to the movement committed atrocities. To differentiate themselves from such groups, the Dutch Anabaptists later identified themselves rather as Mennonites.

The Anabaptists or Mennonites started to live together in small communities to practically live out the teachings of Jesus, that is to love God and their neighbours.

As the persecution intensified in Catholic Netherlands, many fled to Prussia (modern-day Northern Germany and Poland). There they planted new communities which would greatly contribute to the prosperity of the country.

Their stance for non violence became a problem for Prussia in the 18th century. In a time of great international threats, the king needed a strong army. Knowing that we could not count on the participation of the Mennonites, he began to deal harshly with them. This forced the Mennonites to look for a new land of refuge.

While many of them fled to America, a door opened for them also in Russia. The Empress Catherine the Great invited the Mennonites to come and settle in the lands where we are today (then under Russian rule).

And so in the beginning of the 19th century, the first Prussian Mennonites arrived in the region. Soon other Mennonites came from Transylvania and Hungary. By 1860, they had founded sixty villages and hamlets, Halbstadt being one of the first.

One of their most prominent figures was a man named Johann Cornies. Initially, the settlers faced hardship due to poor harvests in such difficult lands. This pushed  Cornies to found the Society for the Effective Promotion of Afforestation, Horticulture, Silk-Industry, and Vine-Culture, or simply the Agricultural Association. Cornies introduced suitablefruit trees and grain. He also improved agricultural techniques and care for livestock. The methods of the Agricultural Association greatly improved the living standards of the people and even drew Russian crown-princes to come and visit their estates.

Nowadays the Mennonites are rare in the area. Whatever happened to them? To understand what took place, we need to look at three historical phases.

The first occurred in the 1870s. Once again their stance for non violence became a problem as military service became universally compulsory in the Russian Empire. Many therefore fled to North and South America.

Secondly in the 1920s (after the Bolshevik revolution), the Soviet authorities started their programme of collectivisation of agriculture. The farmers faced severe hardship as their farms were seized by the authorities. And this led to many deaths and another massive exodus to America.

Finally, during the Second World War, Nazi Germany invaded the land. Many were sent back to Germany. Then a few years later, the Soviets returned. As the Mennonites were suspected to have collaborated with the Nazis, they were sent to internment camps in Kazakhstan and in Siberia.

All of these events have together almost succeeded in wiping out the Mennonites from the land. But while death seems to have had the final word, we know that in God’s kingdom it is always followed by resurrection.

There is a small remnant of Mennonites today in Ukraine. In 2004, the Ukrainian authorities celebrated the 200thanniversary of the founding of the Mennonite colonies to show their recognition for their contribution to the development of the country.

Could this be the early sign of a resurrection?

https://soundcloud.com/aeuropeanjourney/a-european-journey-70-scy-chazelles-france In 1945, a war had devastated Europe once again. The continent was now in…