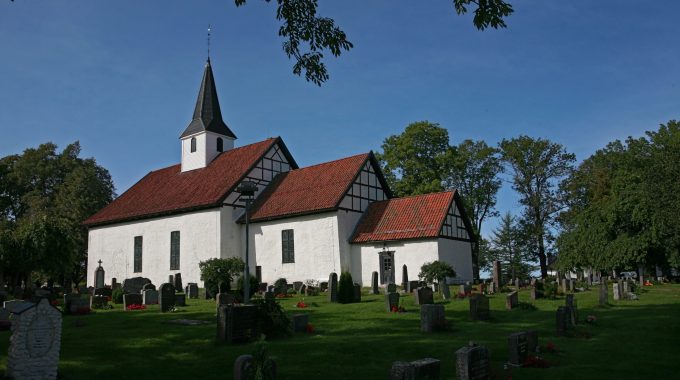 The Bible has had an amazing impact on Norway throughout the centuries. But even if the Gospel had already reached several Norwegian rulers in the tenth century, it still took a few decades before it began to reach the common people.

One of the first evangelistic efforts to reach the Norwegian people took place in the counties of Viken and Vestfold, near Oslo. So, in order to discover more about this, we will visit a village in Vestfold called Borre.

Borre is located by the Oslofjord, 70 kilometres South from the capital of Norway. One of the main sights to visit here is the 11th century Romanesque church, which has thick walls, an oblong nave, a narrow chancel, and a cross dating back to the 13th century. Even though Borre is a village today, it used to be the capital of the ancient kingdom of Vestfold, before the unification of Norway in the 9th century.

Since there are no concrete traces of the first wave of evangelisation remaining, this 11thcentury church is a good representative of early Christianity in Norway. In order to understand the context in which the evangelistic efforts occurred here, we will take a look at the political situation of the time.

The death of Håkoncoincided with the beginning of great political instability in Norway. Harald Gråfell (Greycloak) became overlord of the country and his four brothers ruled over some portions of the land. In practice however, all of them were vassals of the powerful king of Denmark, their uncle Harald Bluetooth.

Just a few years later, HåkonSigurdsson, whose father had been killed by Harald Gråfell, plotted to kill him with the help of Harald Bluetooth. He was thus invited to visit the king of Denmark. Unaware of his impending death, Harald Gråfell accepted the invitation only to be murdered on the journey near modern-day Aalborg. After his death, Norway was divided into two parts. The larger part was ruled by HåkonSigurdsson, as vassal king under Harald Bluetooth, while the lands surrounding modern-day Oslo were directly incorporated into the kingdom of Denmark.

So how did these political developments affect the early evangelisation of this region?

In previous stages, we saw that the first Norwegians to be reached by the Gospel were those who travelled during the Viking expansion (stage 86) as well as several influential people (stage 87). However, it had not yet reached the common people of Norway. Paradoxically, the first evangelistic efforts to reach them occurred in a time when Christianity seemed to be very much in decline here.

As was the case with Håkonthe Good, Harald Gråfell and his brothers were raised as Christians during their exile in England. But unlike Håkon, they didn’t seem to have embraced a personal faith in Jesus Christ. As rulers of Norway, they demolished many pagan temples and greatly contributed to the final demise of paganism, but they didn’t seek to establish Christianity or build churches in Norway, as Håkonthe Good had done. And the situation didn’t improve with theirstaunchly pagan successor HåkonSigurdsson, who tried to revive paganism in Norway.

The only region of the country where the Gospel seemed to take root was in this Southern area ruled by Harald Bluetooth, who had already adopted Christianity as the official faith of Denmark (stage 18). It is very likely that he requested missionaries to be sent from the archbishopric of Hamburg-Bremen to Norway. In fact, this see had been specifically created a few centuries earlier with the purpose of evangelising Nordic lands (stage 4).

In practice, very little is known about the evangelistic efforts that took place under Harald Bluetooth. However, the writings of Adam of Bremen do mention that three bishops, Liafdag of Jutland, Poppo of Schleswig and Odinkar of Odense came to preach here. This period of evangelisation probably ended with the death of Harald Bluetooth in 986, when the pagan ruler HåkonSigurdsson extended his reign over the whole nation.

All in all, it seems that these evangelistic efforts bore little immediate fruit, resulting only in individual conversions but no lasting Christian community. Nonetheless, their teaching began to demolish the old pagan ways of the Norwegians and offer a new worldview grounded in the living God. For instance, Norse paganism sometimes required the sacrifice of human lives to appease the gods, whereas the Gospel presented the true God, who offers His own Son as a sacrifice for those who believe in Him.

Even though the first period of evangelisation seems to have lasted only a few years, the church in Borre, which was built only a few decades later, indicates that the efforts of these first missionaries were not in vain. And this was just a first fruit of the message that would gradually transform every sphere of lifein Norway.