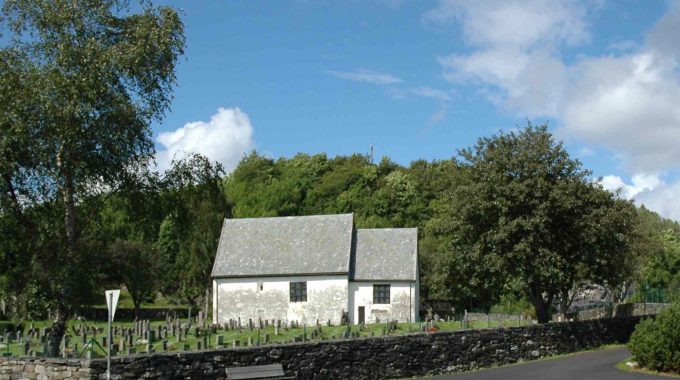 Quite often in history, God has used corrupted rulers to advance his kingdom on earth. For instance, the Gospel was permanently planted in Norway through a king whose understanding of the Christian faith was far from being orthodox.

Today we will visit a village which will tell us how this came about.

This village is called Mosterhamn. It is located on a small island of twelve square kilometres called Moster, near Haugesund which we visited in a previous stage (stage 86). This is actually the island of Tora Mosterstong, the mother of Haakon the Good, the first Christian king of Norway (stage 87).

As its name indicates, Mosterhamn, the harbour of Moster, is a small harbour facing mainland Norway, which lies just a few kilometres away. At a walking distance from the harbour, there is a small white stone church, which was built in 1150. It is thus one of the oldest churches in the country even though it was constructed to replace an even older wooden church, built more than a century earlier.

What makes this place so special is that it has actually witnessed two decisive events for the Christianisation of Norway. And actually the respective leading figures in those events were two kings with the same name: Olav Trygvasson, or king Olav I and king Olav II, also known as Saint Olaf.

In this stage we will explore the circumstances that surrounded the first of these events, which islinked with Olav Trygvasson.

In our last stage (stage 89), we saw how Olav’s life was in great danger in Norway. Being of the line of Harald Fairhair, the father of the unification of Norway, Olav was a legitimate heir to the crown. Since his father had been murdered by his rivals, Olav and his mother fled to Western Russia, where he spent his entire childhood. As a young adult, Olav engaged in a series of raids in Northern Germany, Denmark, Northern Netherlands and later the British Isles, until he finally reached the Isles of Scilly, near Cornwall. There he met a monk whose influence caused Olav to convert to Christianity.

After his baptism in England, Olav began his journey back to Norway. On his way, he stopped in Dublin, which was then a small kingdom of Norwegian migrants. In Norway, the pagan ruler of the time, Haakon Sigurdsson, heard the rumours that a descendant of Harald Fairhair was in Ireland. Worried about the possibility of his return to Norway, Haakon sent his close associate Thorer Klakka to lure Olav to come to Norway where he would be killed. Thorer pretended to be a merchant and lied to Olav, saying that the power of the king of Norway was greatly weakened because of his unpopularity. Thorer’s false report had the desired effect on Olav who quickly decided to sail back to Norway.

An interesting anecdote from Olav’s return can give us a glimpse of his rather peculiar evangelisation methods. When Olav reached the Orkney Islands, an archipelago in the North of Scotland then under Norwegian rule, he met the local ruler, Sigurd the Stout. Olav invited Sigurd for a conversation on his boat where they discussed all kinds of topics. After a lengthy talk Olav finally told Sigurd that it was time for him to choose between being baptised or executed. Unsurprisingly, Sigurd was convinced to choose baptism and also swore allegiance to Olav, which was obviously part of the package offered by the Norwegian ruler.

After this, Olav sailed across the North Sea with his soldiers and several English priests and finally landed here on the island of his grandmother, Mosterhamn, in 995. The very first action Olav took here clearly showed that he did not merely intend to conquer Norway with his army. His primary intention was to transform Norway into a Christian nation. Olav thus set up a tent right on the site of the church that we are visiting today and organised a mass. Even though there had been earlier attempts to establishChristianity in Norway, this mass is considered as the moment that Christianity was introduced into the country in a lasting way.

Now that Olav was finally in Norway, did the plot to kill him succeed?

Quite ironically, the lie that Thorer had invented to lure Olav to return to Norway finally turned out to be true. Around the time of Olav’s arrival at Mosterhamn, a quarrel broke out between Haakon and some of his closest associates. Finally Haakon was killed by the dissidents who joined Olav and proclaimed him king. However, in the year 1000, Olav was killed in the during a naval battle in the Øresund strait.

As I said in the beginning, there was another crucial event for the Christianisation of Norway that occurred here in Mosterhamn. It was here that king Olaf II organised a thing, that is a parliament, in which Christianity was adopted as the official religion of Norway. God willing, this will be the theme of a future stage of A European Journey.

As we can see, although the reign of Olav I was quite short, God used him powerfully to change the course of Norwegian history for good.

Mystery Mouse at the Football Field