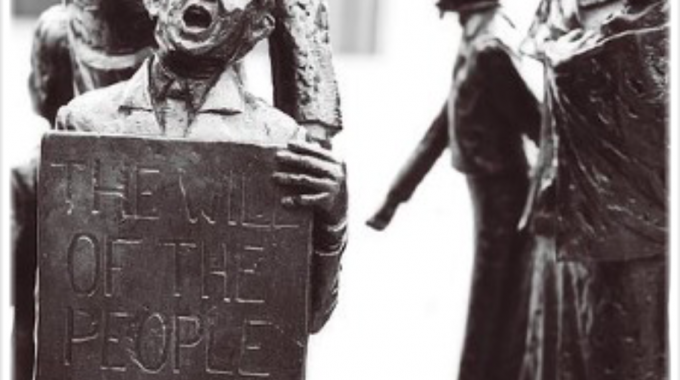 From the Canopy of Prayer (edition 88)

Worldwide, parliamentary democracy has been increasingly at risk for around 10 years.

In a long process spanning centuries, the form of state of “parliamentary democracy” developed politically in the countries of Europe. Its essence is the so-called “separation of powers”. Contrary to the form of government where all power comes from one place (monarch, dictator), democracy determines that power in the state must always be divided into three: between a freely elected parliament that writes the laws, the government that implements the laws and the Supreme Court, which oversees the work of both, thereby guaranteeing civil rights. The government, or its chief, is elected by parliament with a majority of more than 50%. In order to win the majority, it is often necessary to connect two or more parties (“coalitions”). They agree on a programme that they want to implement. Of course, each party tries to bring as much as possible of their ideas, which they have also promised the voters, into the “government programme”. This however requires one thing: compromise. Without compromise i.e. the reconciliation of interests, no democracy can live. That makes many voters angry. The alternative is to suppress other opinions, persecution, or dictatorship. Many voters today have forgotten or never experienced things like the Nazi regime or Communist dictatorship so they go to the protest parties that always agree with them. Protest against “those up there” is the core message of all populists.

Where are we standing?

At the moment we are in a democracy-critical slope in Europe which is highly dangerous because once the populists are in power i.e. in government with more than 50% in parliament, they immediately start to undermine democracy, for example the independence of the judiciary (Poland, Hungary, Italy under Berlusconi and Salvini, Trump in the USA).

Unfortunately, these examples show that democracy abolishes itself through its own rules. Hitler was elected democratically. The battle currently in Europe is no longer about parties “left” or “right”, but about the preservation of democracy or the “abolition of the system”.

What do we learn from this?

This was the Day!

The sixth of a series from Paul‚Äôs time to today via the Moravian church, in…

The ‘European’ Constitution for dummies – I

IF A CAMEL IS A HORSE DESIGNED BY A COMMITTEE, then what's the nature of…

A day to celebrate

Wherever the Irish are in this world, they’ll be painting the town green tomorrow, St…