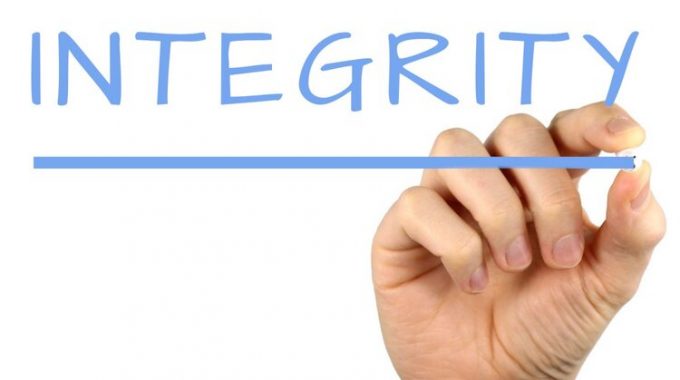 Integrity and anti-corruption are foundational for character

The early Church (in the countries around the Mediterranean) experienced violent persecution. Countless sisters and brothers were martyred for their faith in Jesus Christ. It began at the first Church in Jerusalem with a deacon Stephen who, according to Acts 7, was stoned to death for his faith in Christ his Savior. However, Stephen was not the first person of the Church of Jerusalem to die. The first were Ananias and Sapphira, members of the Jerusalem Church. They did not tell the truth about their contribution to the Church, and because they lied – because they lacked integrity they were punished with death.

Martin Allaby, a member of the Micah Anti-Corruption Group, writes “It has been estimated that US$50 billion per annum may be stolen from money that Christians give to churches, para-church organizations, and secular organizations around the world.” Where are the individuals, the Christians, who demonstrate integrity?

Integrity: this is one of those terms we use often but without realizing its implications. “Integrity” is defined as: “honesty,” “uprightness,” “soundness,” “completeness,” “wholeness,” “incorruptible.” Evangelist Billy Graham, co-founder of the Lausanne Movement in 1974, said “When we speak of integrity as a moral value, it means that a person is the same on the outside as he is inside. There is no discrepancy between what he says and what he acts, between his talk and his walk.” Chris Wright, in his Cape Town presentation, said:

The overwhelming witness of the Bible is that the greatest problem for God in his redemptive mission for the world is his own people. What hurts God most, it seems, is not just the sin of the world, but the failure, disobedience and rebellion of those God has redeemed and called to be his people, his holy distinctive people… We have to deal with:

Jesus himself was tempted in all three areas and resisted the temptation (Mt 4:1-11). With the help of our Lord Jesus Christ we can distance ourselves from all of these idols that tempt us, often on a daily basis.

For Jerald Daffee, integrity is the integrating element that unifies character, conduct, and one’s composite lifestyle. For him a simple working definition is:

Everyone can list numerous examples of a lack of integrity in individuals. Consider these, which I have personally encountered:

To seriously address integrity one must begin with the condition of one’s own life. Do I strive to practice integrity, to be open to re-formation by God, to become more holy? It is not enough to condemn big bribery scandals or power-seeking individuals. We also have to examine ourselves.

“We, as followers of Christ, must not simply accept the reality of corruption in the world. We need to be concerned. ”

Time for Reflection on the Question: Am I a Person of Integrity? Sharing, Confessing, Celebrating, etc…. (Time for small group discussion)

Often we use expressions or terms without having a clear understanding of their meaning or implications. In recent days I have asked more than a dozen individuals for their definition of the term “corruption.” I received a great variety of answers. The term is defined by the Webster dictionary as: “to bribe,”” to spoil,” “morally unsound,” “perverted,” “wicked,” “evil.” Disturbing terms. Yet we have become immune to such reports because we hear almost daily in the media of scandals and financial scams involving government officials, businesses, and individuals. Our tendency is to say “So what?”

We still accept this terrible situation as being wrong but consider it beyond our control. We do nothing, and accept the situation – unfortunate, but reality. There are, however, some who have invested time, energy, finances in doing something about the situation.

6. The faculty of Dallas Theological Seminary developed a 140 page workshop study guide on integrity, “Examining How I Live.” This book can be used by any group of academics, pastors, students, or laypeople desiring to examine their own lives.

7. The leadership of the Third Lausanne Congress on World Evangelization held in Cape Town in 2010 recognized the need to pay special attention to the issue of corruption and integrity. To this end, Chris Wright spoke on “Calling the Church of Christ Back to Humility, Integrity, and Simplicity,” and Chapter IIE of the Cape Town Commitment deals with the issue. A global network on “Integrity & Anti-Corruption” has also been established. This is a joint effort of the World Evangelical Alliance (WEA) and Lausanne and is led by Efraim Tendero, Philippines, and Manfred Kohl, Canada. Membership is open to anyone interested in this important topic.

We, as followers of Christ, must not simply accept the reality of corruption in the world. We need to be concerned. We are called to be the light of the world (Mt 5:14), and there are many ways in which we can fight corruption. However, there is another side of this issue, the need to examine ourselves. Corruption is simply the reflection of a lack of integrity.

Time for Reflection on the Question: What Can I / We Do to Tame the Beast of Bribes, Corruption, Extortion, etc… (Time for small group discussion)

Dr. Manfred Kohl has served as pastor, professor, founder of World Vision West Africa and Central Europe, and Vice-President and Ambassador of Overseas Council International. He has been with the Lausanne Movement since its beginning in 1974. Dr. Kohl is married to Dr. Barbara Kohl and they reside in Canada. They have two married sons and six grandchildren.

As I sit on the deck of the Next Wave, the 42 metre training and…

The sixth of a series from Paul‚Äôs time to today via the Moravian church, in…