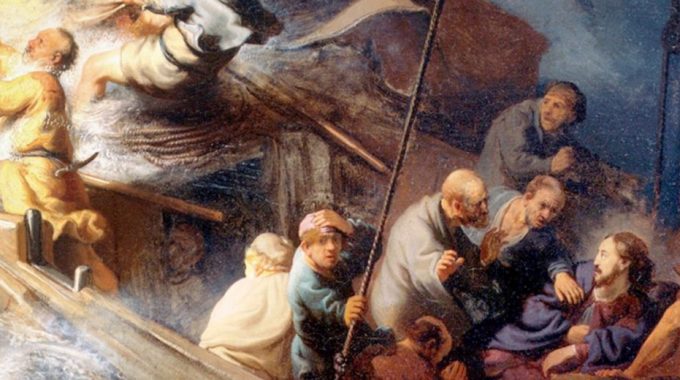 The Bible has been the single greatest source of inspiration in the development of western art, right up to modern times (as we discussed last week in our Bible for Dummies series in the Upper Room in Amsterdam). Lack of knowledge of the Bible’s characters, themes and stories therefore impoverishes culture and education, robbing art viewers of proper understanding.

Granted, Egyptian, Mesopotamian and Greek art reflected advanced civilisations as the Old Testament stories were still being lived out; the New Testament unfolded against a backdrop of brilliant Roman artistic developments; and rich Greek and Roman artistic legacies of the observation of nature were lost during the centuries of what were often called the ‘Dark Ages’, only to be rediscovered in what became known as the Renaissance.

The cause of this loss was the command to have ‘no graven images’ (Ex. 20:4). This has been read by streams in Judaism, Christianity and Islam as prohibiting any form of representational art, lest they be used for idolatry. Yet in the same book we read instructions for making two cherubim of hammered gold on the Ark of the Covenant (Ex. 25:22), and curtains for the tabernacle with ‘artistic designs of cherubim’ (Ex. 26:1), prompting the argument that only images intended for false worship were forbidden.

After the Christian faith was embraced by the Roman empire, the question of art in churches led to violent disputes. When Pope Gregory the Great weighed in on the controversy late in the sixth century, declaring that ‘painting can do for the illiterate what writing does for those who can read’, he unwittingly helped create what would become the Great Schism between the eastern and western churches. In the East, two parties vied for control. The iconoclasts (image-smashers) who opposed all images in sacred art initially gained the upper hand, but lost out to the iconophiles who revered icons as aids to worship, holy images and doors to heaven, after the Seventh Ecumenical Council in 787.

Gregory’s middle ground argument was unacceptable for both eastern parties who thus resisted a Latin pope. Yet it prevented the history of western art from following Jewish and Islamic art, allowing design but not representation. Art in the pope’s view should tell the sacred story as clearly and simply as possible without embellishment or distraction.

As the Roman empire imploded, the ‘pagan’ art of the newly-christianised northern European ‘barbarian’ tribes was now adapted to tell the sacred story. Celtic, Saxon and Viking indigenous art styles supplemented texts in the Book of Kells, the Lindisfarne Gospels and the Jelling Stone, for example. Celtic monasteries and convents became centres for the creation, promotion and preservation of the arts, a task later passed to the Benedictine monastery network across western Europe, the building blocks of the emerging European culture.

While secular art no doubt was produced in this era, few examples survived the destruction of castles, palaces and forts during conflict, one major exception being the Bayeux tapestry of Brittany depicting the 1066 Norman invasion of England, which survived because it was kept in a church.

The Normans expressed their own architectural style, called ‘Romanesque’ on the continent, in churches, abbeys, minsters and cathedrals: sturdy, thick-walled bastions decorated with frescoes of biblical scenes of the gospels, the Last Judgement or stories of Christian saints. Here was the Church Militant, fighting the powers of darkness with a Crusade mentality.

Next came the French style with pointed arches, stained glass windows and flying buttresses, cathedrals built around ‘stone skeletons’, light and awe-inspiring, heaven-on-earth, the New Jerusalem, the Church Triumphant. Later Renaissance artists would dub this style ‘Gothic’ or barbarian, as they resurrected the ‘pure’ classical styles of the Greeks and Romans.

Around the thirteenth century, lost classical styles of more natural, three-dimensional depiction of bodies began to be recovered, yet still with the aim of telling the sacred story more vividly. Thus far, paintings of people had remained two-dimensional and shapeless, telling stories ‘clearly and simply’. Artists had worked anonymously decorating cathedrals, creating sculptures, wall-hangings, windows and stone-masonry, all to God’s glory.

A renaissance in art began as Giotto di Bondone (c.1267-1337) retrieved the art of creating illusion of depth on a flat surface, still in the service of bringing the gospel story to life, just as the preaching friars of the day stirred their listeners to visualise the bible stories.

And so this Renaissance ushered in the history of the great artists, who up to our modern times continued to find their chief inspiration from the Bible, as revealed by this list of biblical-themed art pieces each artist produced. Rembrandt alone stands out with 118 artworks, while in fact he created over 300 drawings, etchings and paintings on Bible themes (see photo above).

Who can argue about the all-pervasive influence of the Bible on our art?

What charter for humanity? Defining the destination of ‘development’ (3/5)

Does the Bible have something to say about 'development'? In the third installment of his…

How ‘religious’ are Europe’s Muslims?

16 aug 2010 Across Europe this month, Muslims are celebrating the annual feast of Ramadan,…