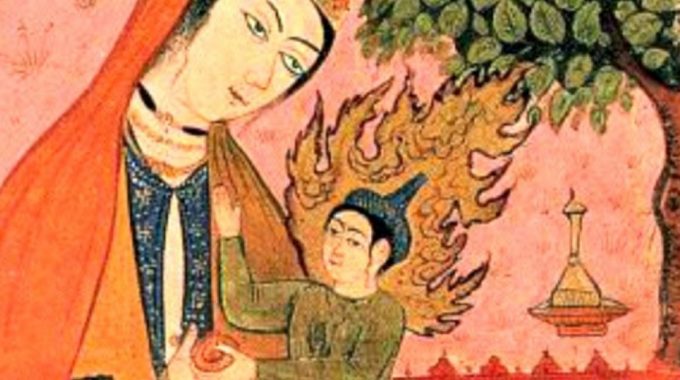 Why do Russians celebrate Christmas on the 7th of January? And what do Muslims believe about the birth of Jesus? These are two questions that Jeff Fountain explores in his first weekly word this year.

For many Europeans, thoughts about Christmas have already been drowned out by noisy celebrations of the New Year and the resumption of the humdrum realities of daily life.

Yet Christmas is not over for millions of Europeans. Today is the celebration of the Feast of Epiphany, commemorating the visit of the Magi from the east who experienced the revelation (hence ‘epiphany’) of the Incarnation of the Christ as the infant Jesus.

In the Spanish-speaking world, for example, today is called Dia de los Reyes (Three Kings Day), when most children receive their Christmas presents. Last night, many Spanish children left their shoes by the door hoping to have them filled with gifts from the three kings. The roscon de reyes, or kings’ cake, is a centuries-old tradition, a ring-shaped pastry decorated to look like a crown, topped with glazed fruits depicting coloured jewels. Often a baby Jesus doll is baked into the cake, symbolizing a Jesus hidden away from the murderous Herod.

While Italians hang stockings by doors for the kings to put presents in, Greeks will be diving into the sea today to retrieve wooden crosses, re-enacting the baptism of Jesus in the Jordan River. According to Greek Orthodoxy, Epiphany commemorates that event when a voice from heaven said, ‘This is my beloved Son, with whom I am well pleased’.

Yet other Eastern Europeans will celebrate their Christmas tomorrow, on January 7. The discrepancy in dates is due to the use of the older and less accurate Julian calendar by churches in many eastern European countries, and the Gregorian calendar in the west which replaced it in 1582.

Protestant countries feared Pope Gregory XIII’s calendar switch as a plot to suppress their movement. While Catholic parts of Europe adopted it immediately, Dutch, Swiss, German and Nordic Protestants only did so in 1700. The British and their American colonies waited until 1752, when September 14 followed immediately after September 2. Benjamin Franklin noted in his almanac: ‘…what an indulgence is here for those who love their pillow to lie down in peace on the second of this month and not perhaps awake till the morning of the fourteenth.’

Despite a 70-year ban on Christmas under atheistic communism, many Russians again celebrate the birth of Christ as a religious holiday. Tonight in Moscow it’s likely that even President Putin will be attending a Christmas Eve service in an Orthodox church, in his self-appointed role of ‘Defender of Orthodoxy’. Less likely however is that his thoughts will be focused on goodwill towards all men in the light of the American drone attack on the top Iranian general.

Which brings us back to the land of the Magi, Persia.

We would probably not expect Muslims to have much use for the Christmas story, would we? That is, unless we were familiar with the Koran.

For celebrating Christmas this year with two young Muslim refugee women from Yemen led to an ‘epiphany’ for Romkje and myself. Looking for common ground for conversation, we researched what the Koran had to say about the birth of Jesus. We discovered that Jesus is the most-mentioned person in the Koran: 187 times, directly or indirectly; 25 times as ‘Isa’, 35 times in the first person, 48 times in third person, with the remaining references being titles or attributes.

The Koran describes ʿĪsā ibn Maryam, Jesus Son of Mary, as the Messiah (al-Masih in Arabic), born of a virgin, performing miracles, accompanied by disciples, rejected by the Jewish establishment, and being raised to heaven. While the Koran denies Jesus was crucified or died on the cross, and rejects Jesus as God incarnate or the Son of God, Islamic eschatology expects Jesus to return in a Second Coming to fight the Al-Masih ad-Dajjal or ‘False Messiah’ and establish peace on earth.

The Koran describes Jesus as born a ‘pure boy’ (sinless) to Mary as the result of virginal conception. In fact, Mary (Maryam in Arabic) is the only woman named in the Koran, which refers to her seventy times (more often than in the New Testament), calling her the greatest of all women. Her story is related in eight chapters, including an Annunciation narrative very similar to Luke’s account. Gabriel tells Mary she will bear a child whose name would be Jesus and who would be the ‘anointed one,’ the Promised Messiah. (See the ancient Persian print of Mary with child, above).

Persian scholar and historian Al-Tabari wrote in the tenth century about envoys arriving from the king of Persia bearing gifts for the Messiah, a story any Spanish child would recognise.

So, surprisingly for us as westerners, there is much we have in common to talk about with Muslims concerning Christmas and Epiphany!

What would Jesus do about economic growth?

Should Christians support capitalism? According to a leading English layman, despite all its material benefits,…