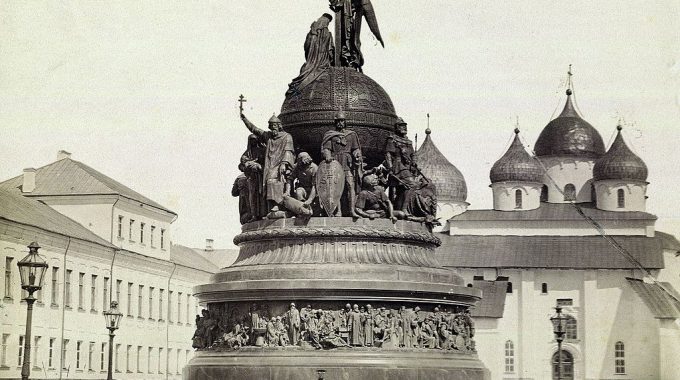 In the ninth century, a Viking tribe began to move into modern-day Russia. After settling around Lake Ladoga, they aimed to conquer the southern lands down to the Byzantine Empire. But instead, it was the Christian faith of the Byzantine Empire that spread into the North.

In the three previous stages, we discovered how the Christian faith reached modern-day Ukraine. But how did Christianity become the dominant faith of Russia?

One of the best ways to understand how Christianity spread into this vast country is to visit and explore Veliky Novgorod (or Novgorod-the-Great). This city is located slightly over 150 km South-East from Saint-Petersburg and lies on the banks of the Volkhov River, which flows into Lake Ladoga 200 km further North. Here we find the first traces of the arrival of Christianity in Russia.

The old town of Veliky Novgorod is surrounded by mediaeval walls called Detinets, or more famously Kremlin, which were built in the architectural style called Brick Gothic. Inside these walls, we find mediaeval sites, such as the Cathedral of Holy Wisdom (or Saint Sophia) and a monument called The Millennium of Russia.

As its name suggests, The Millennium of Russia, which is a 15-metre-high bronze monument, was built for the 1000-year anniversary of the Russian nation, in 1862. It is the work of Russian architect Viktor Hartmann and artist Mikhail Mikeshin. The lowest level depicts 129 influential people in Russian history. There are many rulers, artists and military leaders but also church leaders, monks and missionaries. The middle level depicts the six main phases of the first thousand years of Russia.

There is a lot to explore through this monument. But since our objective is to know how Christianity spread into Russian lands, we will focus mainly on the first two phases, which are the arrival of the Varangians and the Christianization of the Rus’. These two phases occurred within the space of a century, and turned Novgorod from a pagan capital into one of the most influential cities for the spread of Christianity in Russia. But how did this happen in practice? Let’s explore this in more detail.

The first phase of Russian history, which is the arrival of the Varangians, coincides with the founding of Novgorod. It is represented by a man standing with a helmet, a sword and a shield. The man is Rurik, the chief of the Varangians or Rus’. He was also the founder of the Rurik dynasty, which was the first dynasty of Rus’ rulers. We already saw in a previous stage that the Varangians were Vikings who had initially settled near Lake Ladoga, and the year 862 is considered to be the year of their arrival. This is when Rurik built the first capital of his dominion, which he called Holmgård, and which later became Novgorod. As a pagan, Rurik built temples here to his gods. After his death, the Rus’ continued to expand their territory towards the South.

The second phase of Russian history is the Christianisation of the Rus’. It is represented on the monument with Rurik’s great-great-grandson, Prince Vladimir standing with a cross. Next to him we see a woman holding her child for baptism and a man destroying a statue.

During the last two stages, we discovered how Vladimir the Great had become a Christian and how he had Christianized Kiev and the surrounding regions. But Vladimir knew that he had to obey the Great Commission of Jesus Christ and so his goal was to spread the Christian faith in remote areas of his country. So how did the Christianization of Russia, and in this case of Novgorod, take place?

It would be misleading to believe that Christianity first arrived in the area of Novgorod under Vladimir. In fact, it is very probable that Christianity had already reached this area during the first phase of Russian history. According to tradition, there was already a monastery built by two Greek hermits in Valamo, an island in the north of Lake Ladoga, as early as the 10thcentury. And from that monastery, some went to preach the Gospel to lands as distant as modern-day Rostov, 700 km east from Novgorod.

Although the Gospel had made some progress in the land before Vladimir’s time, it was under Vladimir that the Church was established in Russia. To accomplish this Vladimir had sent his bishops to certain areas of his country. And to Novgorod, he had sent the main leader of the church, the metropolitan of Kiev who was called Leontius.

Leontius created a bishopric in Novgorod and appointed Ioakin Korsunianin as the first bishop. Dobrina, who was the governor of the city and also the uncle of Vladimir, helped Ioakin to destroy the pagan shrines. They even threw the statue of Perun, the main Slavic god, in the river, as Vladimir had done in Kiev. Contrary to other places in Russia, the local population did not oppose them. Later on, Vladimir of Novgorod, the grandson of Vladimir the Great, built the cathedral of the Holy Wisdom on the former site of a temple dedicated to Perun.

What is astounding is that although Rurik had built Novgorod as a pagan city, it only took a century for it to become the seat of a major bishopric that influenced the entire nation. Looking up to the top of the monument, it is therefore no surprise to find a large cross there.