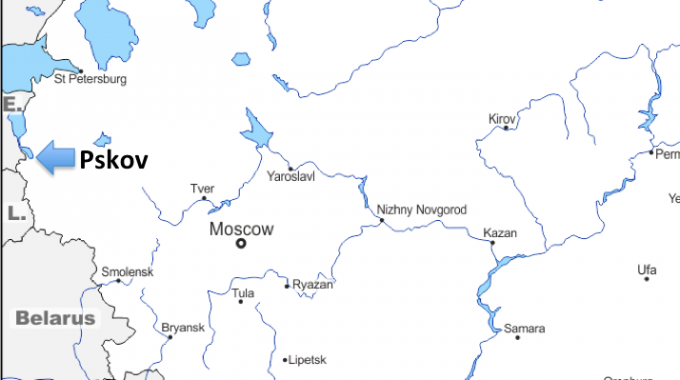 This week we are visiting the city of Pskov in Russia. The city is located near the borders of Estonia and Latvia, and we are actually exactly at 190 km from the Latvian city of Valmiera where we were two weeks ago.

A walk across the city of Pskov will quickly show that two highly influential figures from Russian history were linked to this city.

As we cross the main bridge over the Velikaya River to enter into the city centre, we arrive in a park in front of a huge Soviet-style building. Here is an enormous statue in honour of one of the historical figures I mentioned. It is Vladimir Lenin. In the same neighbourhood we can also find a street, a park and a museum bearing his name.

Why would the father of the Soviet Union be so honoured in Pskov? It is because Lenin lived here for a short time in the year 1900 in what is today the Lenin Apartment Museum. This is when he was raising funds to start his newspaper Iskra (meaning spark), in order to spread the communist ideology in Russia. Seventeen years later, Lenin passed into action by leading the Bolshevik Revolution, which triggered an era of atheism in the Soviet Union.

Only 400 meters further South along the main road, we find another statue in honour of the second significant figure I mentioned. It is the statue of a lady with a little boy in front of her. The lady in question is called Olga. And if we continue our walk through the city, we can also discover many other buildings bearing her name, such as a bridge, a church, a chapel or a youth hostel.

But who was Olga and what is her link with the city?

Unfortunately, as with many medieval figures, not all the accounts regarding her life are historically verifiable. Nevertheless, she has had a huge influence on the history of Russia.

Olga lived in the 10th century and was probably born right here in Pskov. She was possibly of Viking origin and married a man named Ingvar. This man later became known as Igor I of Kiev, the prince ruler of the Kievan Rus’, which was a powerful nation centred around Kiev. Later it even included the nearby principality of Novgorod, which is located in modern-day Russia.

About a century earlier, Askold and Dir had been the first princes of Kiev to become Christians. They had been greatly influenced by the Imperial church of Constantinople. Nevertheless, their conversion hadn’t succeeded in establishing the Christian faith in the land which had largely kept its pagan beliefs.

The successors of Askold and Dir did not seem to have embraced their faith. When Olga’s husband Igor was murdered, their son Sviatoslav was still a child. Thus Olga became the regent of the principality for a time. Nevertheless, one of her first acts was not very biblical, as she lead a punitive expedition against the tribe of her husband’s murderers.

So how did Olga become a prominent figure of the Russian Church? The answer to this is that Olga was soon drawn to Christianity and so she undertook a journey to Constantinople in her search for God. There she was baptized by the Patriarch Polyeuctes, and the Emperor Constantine VII became her godfather.

Olga was renamed Helena, as a reminder of the mother of Constantine I, the first (officially) Christian emperor of the Roman empire. Her new name would actually be symbolic of the role she would have in her own principality. In Constantinople, she learned what was then considered the basics of Christianity at the feet of the Patriarch. This included the canons of the Church, prayer, fasting or almsgiving.

When she returned in Kiev, she succeeded in convincing her son Sviatoslav, who was now an adult but not a believer, not to persecute the Christians. During her lifetime, Christians lived peacefully and the message of the Gospel spread in the land.

During Sviatoslav’s numerous absences due to military expeditions, Olga continued to reign in the city of Kiev. Sviatoslav even gave his children to her care. And of course she raised them in the Christian faith. Finally Olga died in Kiev in the year 969.

The young boy in the statue standing in front of Olga was one of the grandchildren she raised. His name was Vladimir and he later became the Grand Prince of Kiev. His conversion and baptism in 988 are still considered as the event that laid the foundation for the Russian Church and therefore for the Russian nation.

It is quite remarkable that in this city of Pskov, two characters with two diametrically opposed worldviews meet: Olga, who opened the door for the Gospel to spread into the land, and Lenin, who closed that same door nearly a millennium later.

And it only takes one person to open that same door again.

https://soundcloud.com/aeuropeanjourney/a-european-journey-38-constantinople-turkey Today we will continue our miniseries exploring the history of the Orthodox Church. Our…

https://soundcloud.com/aeuropeanjourney/a-european-journey-82-mansfeld-germany In Europe, we tend to take our social welfare system for granted. However, few…