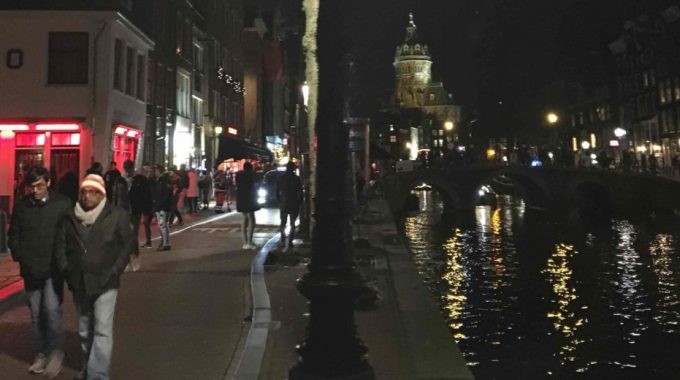 A short walk from where I live opposite Amsterdam’s Central Station brings you to numerous locations associated with the slave trade between West Africa and the West Indies, Brazil and Surinam. Amsterdam city was itself co-owner of Surinam, and meetings of the Society of Surinam deciding the fate of many thousands of slaves took place in the city hall.

Once condoned by churches and political institutions, the slave trade today is an embarrassment to the liberal Dutch. Recently the Rijksmuseum announced that the term ‘Golden Age’ would no longer be used to refer to the prosperous seventeenth century, as there was nothing ‘golden’ about wealth generated through forced labour. Slavery has been illegal in the Netherlands and her colonies since 1863, and is internationally condemned.

Yet today, right under our noses, slavery continues right here in the heart of Amsterdam. The story is repeated in cities across Europe and the world. While condemned by international law, UN and EU declarations, a global slave trade abuses 25 million women, children and men – more than ever before in history – earning an annual €150 billion (!!) for global networks of traffickers and pimps. Most of the trade involves the sexual exploitation of women and girls, while forced labour in other fields includes many children.

This slave trade is protected by ignorance and indifference on the part of people like you and me, the lack of political will-power and a falsely ‘liberal’ attitude towards fellow human beings. The argument is age-old. A 17th century philosopher in Amsterdam argued that prostitution was necessary to protect the city’s womenfolk from the up to seven thousand seamen coming ashore from the 1500 sailing boats moored in the city harbour.

Paradoxically, the ‘red-light’ tradition was initiated by members of Amsterdam’s Oude Kerk, now in the centre of the city’s (in)famous Rosse-Buurt district. To protect their womenfolk from being molested, they insisted that brothels should be indicated by a red light over the door, a practice now replicated around the world.

Should we be proud of our ‘liberal’ cities and countries where the ‘oldest profession’ has been legalised and can be practiced in all openness? Romkje and I attended an election meeting for the Amsterdam city council where a female candidate from the liberal party argued that prostitution was a profession just like any other. ‘So,’ remarked a Christian candidate, ‘are we going to start courses in prostitution at high school then?’

Following the annual European Parliament Prayer Breakfast in Brussels last week, I attended a panel discussion on modern-day slavery in which Amsterdam came under particular scrutiny. Alongside several experts including John Richmond, the American Ambassador for Trafficking in Persons,  Englishwoman Jane Lasonder told her story of having been beaten and abused by a step-father and of being forced into the world of prostitution.

Jane asked how it was possible to legalise the daily rape of women who are forced against their wills to engage in sex with more than twenty men a day, anesthetising themselves with drugs, hating men deeply yet often not daring to quit their job. What sort of liberalism defends the freedom of men to exploit vulnerable women? What’s wrong with a society, she asked, which condoned as ‘broad-minded’ the daily parade of tourists and even school-children past the windows where scantily-clad women displayed themselves to try to make the daily quota of clients their pimps demanded? Does making it legal make it right? Why is the public not as embarrassed about today’s trade in human flesh as it is about the shady past?

She told of visiting women behind the windows in Amsterdam and seeing groups of school children being led past by their teachers talking about ‘our open and enlightened culture’. In her book ‘Red Alert’, Jane tells of her own journey across the Netherlands, England and Israel, and also interviews (in great secrecy) a dozen other women forced to work on the streets and behind windows.

Despite threats on her life from pimps, Jane insists these stories need to be told to change the public mentality. ‘It makes my blood boil!’ she told her Brussels audience, who gave her a standing ovation.

Slavery didn’t become wrong in 1948 with the Universal Declaration of Human Rights, says Richmond. It was wrong the whole time. For some 4,000 years, he said, some form of legalised slavery had existed in every country in the world. Only over the last 220 years—a mere sliver of time—did nations begin, one by one, to acknowledge the horrors of slavery and pass laws to curtail the slave trade and emancipate those affected by it.

That change, he added, started with a small dedicated band of believers. It can happen again.

Promise Of The Future

Many Christians wonder if God is still welcome in Brussels.  After all, wasn’t he banned…

For many thousands of Christians in south Asia, the name “Bart” is a household concept…