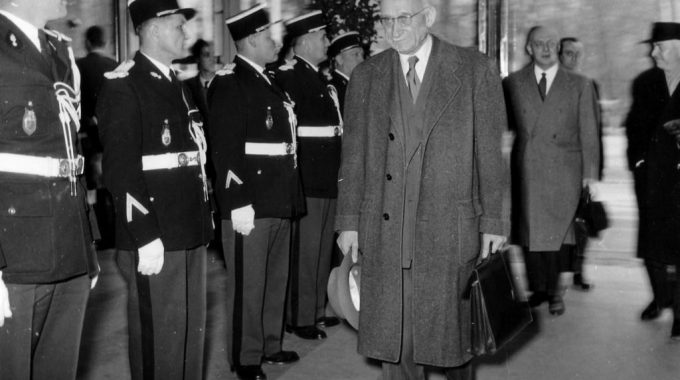 During this Christmas break, the Schuman Centre for European Studies will republish some excerpts of Jeff Fountain’s book ‘Deeply Rooted’. Today, Jeff explores the events of Schuman’s life that led him to be convinced of the necessity of love and forgiveness in international politics.

What life experiences and influences shaped Robert Schuman’s spiritual passion and internationalist motivation for a reconciled Europe? What chief factors formed his character and outlook? What prepared him to extend his hand to former enemies and build towards a common future?

In his sixty-four years prior to the Declaration of May 9, Schuman was forced by circumstances to change citizenship five times. He experienced first hand two global wars erupting out of the heart of Europe. He witnessed the crushing impact of the Versailles Treaty on the Germans, and of economic depression leading to nationalistic protectionism. He saw the rise of international communism starting with the Russian Revolution at one end of the political spectrum, and of Fascism in Italy and National Socialism in Germany at the other. He was arrested by the Gestapo, and faced being sent to Dachau before escaping into Free France.

Turbulent times formed his life mission to find a stable, just and lasting European framework for a ‘community of peoples’, partnering in freedom, equality, solidarity and peace.

His father, Jean-Pierre Schuman, from French Lorraine, was himself captured by the Prussian army in its successful 1870 campaign against the French. Rather than remain under Prussian rule after the war, he left Lorraine for Luxembourg just across the border, where he met and married a local girl, Eugenie Duren.

Robert Schuman, their only child, was born in Luxembourg in 1886. From his youngest years, Robert played in the ploughed furrows on his uncle’s farm straddling the border of Luxembourg and Prussian Lorraine, instilling a lifelong awareness of being a ‘border person’, as he later described it.

A devout Catholic, his mother raised young Robert in her pious faith, accompanying him regularly to Mass and guiding his reading programme in devotional literature. Mother-son ties deepened further after his father died at the turn of the century, when Robert was only fourteen. Together they studied books from the growing library his mother encouraged him to collect.

Robert left home to study for a year in Metz, followed by university in Berlin, where he helped found a chapter of Unitas, a socially-engaged Catholic student organisation. More study in Bonn, Munich and Strasbourg finally gained him a law doctorate in 1910.

But the rosy future beckoning the promising 25-year-old lawyer with his new legal practice in Metz was shattered one summer’s day in 1911. News arrived that horses bolting at a wedding reception had knocked his mother to the ground and killed her.

This tragic loss triggered thoughts about ‘leaving the world’ to enter the priesthood. One of his role models as a young adult was Abbot Bentzler of the Maria Laach Abbey, a Benedictine monk whom Schuman respected as a godly man. The quiet lifestyle of devotion, contemplation and study was to appeal to him all his life long. Now, alone in the world, this option seemed particularly attractive.

Schuman confided his thoughts by letter to a friend in Strasbourg. While he could not imagine a better apostle than Schuman, replied Henri Eschbach, ‘les saints de l’avenir seront des saints en veston’– the saints in the coming age will be saints in civvies.

Believing that God guided individuals personally, Schuman took this advice as divine encouragement to ‘aid atheists to live rather than Christians to die’.

The road to Pax Americana

(The third in a series on Christian hope in an age of Pax Americana). IN…

Ripe for harvest – in Germany?!

JUMP IN THE CAR AND HEAD FOR GERMANY! That's the message I heard this morning…