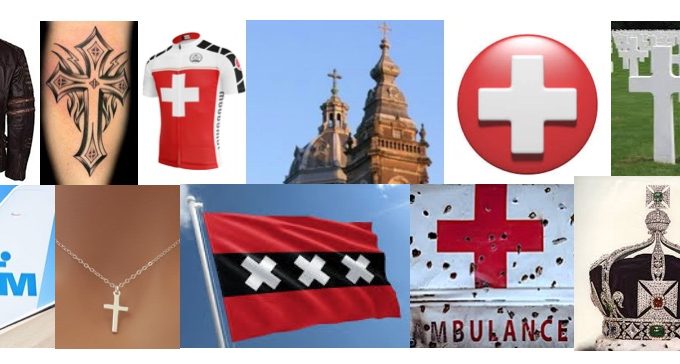 The symbol of the cross is so present in Europe that we hardly notice it in our daily life. In the following article, Dr Evert van de Poll explores this phenomenon.

This is an excerpt of Evert’s book Christian faith and the making of Europe. To be published soon.

Wherever you go in Europe, you find crosses. One couldn’t think of any other symbol that is so typical of our continent.

You find them in an endless variety of shapes and colours, in church buildings, on bell towers, on the roadsides, on mountain tops, in schools and hospitals, in private homes, on book covers and posters. Countless people wear them as ornaments or amulets, or both. Crosses are carried in processions. Sport clubs have crosses in their emblems. Europe is literally packed with crosses. The cross, of course, symbolizes the Christian faith. It stands for the religion that has created a bond between the peoples of this continent, despite their different cultures, their rival interests and so on.

But notice this: as you travel across the continent, you will find crosses of all kinds. In fact, the same cross comes in a great variety of forms. We have the Celtic Cross, the Huguenot Cross, the Nordic Cross, the Maltese Cross, and the Languedoc Cross, to mention but a few. Each of them represents not only the message of Christ but also a region, a language, a nation, a particular history, a local tradition.

Ten European countries have a cross integrated in their national flag, but the colours and forms are different on each flag.[1]A larger number of regions and provinces have cruciform symbols. Each of these crosses symbolizes a particular history, a particular regional or national identity. You don’t find this elsewhere, by the way. Outside Europe, the flags of only six countries bear a cross: Tonga, the Dominican Republic and four countries of the British Commonwealth that incorporate the United Kingdoms’ Union Jack and its triple cross in the corner of their flags (Australia, New Zealand, Fiji, and Tuvalu).

The Christian cross reveals something of the identity, not only of our continent as a whole, but also of its diversity. The omnipresence of this symbol, in an almost endless variety of forms and formats, is a clue to understanding the way in which the cultures and societies of Europe have become what they are.Here is the point we are making in this chapter:Christianity has played a key role, not only in the emergence of the cultural unity of Europe but also in the development of its social, political and cultural diversity! If there is one symbol that captures the paradox of Europe, i.e. its unity and its diversity at the same time, it certainly is the Christian cross.

FASCINATING SUPPORT FOR THE TRADITIONAL STORY OF THE THREE WISE MEN comes from Marco Polo,…

Dr William Yoder, a missionary based in Minsk whom I recently met in England, sent…

A short drive from where I live, just outside of Zwolle, is a leafy…