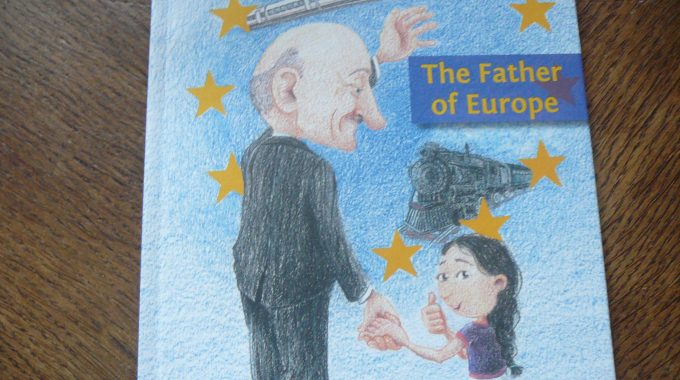 It is a great privilege for us to be here today. If you would have asked any of us one year ago where do you  see yourself on May 10, 2019, none of us would have answered: we will be singing Ode to Joy in the Romanian Parliament. But here we are!

I would like to present to you shortly a one particular side of The Schuman Centre that is yet in the making: Schuman for kids. The carriers of the vision had to be, as you may well guess, the Schuman mothers. We understood that it depends on us how well our kids will understand great visions like the one of Robert Schuman, a vision of forgiveness and reconciliation, of togetherness and connectedness, of unity with diversity. But how can you translate such a vision to children in the middle of the daily battle to replace a remote control with a book in those little hands? And if you are a parent you understand for sure that it is a war we wage everyday, not for land and borders, as hero mothers did it 76 years ago in the great war together with their husbands. Today we fight for little minds and souls.

We also understood that it is not enough to shape one mind, being that of your own children, but how about their peers, how about those who influence them maybe more than you do as a parent in certain circumstances. With this in mind, the Schuman mothers got busy! Great characters were born, like the Mystery Mouse that takes children on a journey to discover the places that the Bible helped to create. Or a novel for pre-teens that talks about football and you will never guess what else: but yes… you are right….the story of Schuman.

This is some of the work of one amazing Schuman Finnish mother: Elina Placentino. She also wrote a book for children: What the Bible did? … and I’m sure her kitchen is steaming with many more ideas.

In Romania, we got even more crazier! Last year on Europe Day we took our children to the university campus in Cluj. I remember passing by the main square where May 9th was being marked with fanfare and political speeches. I thought how next door, in the Faculty of History, this day was about to be marked in a very different way.

The kids present today here were 12 back then.[1]They invaded the sanctuary of studies, books and research with their laughter and curious questions, relating with no inhibitions to the students, professors and guard at the gate.

The professor introduced the kids to the students who would be their coordinators for the day. The kids were formed into teams and given a great leader: Robert Schuman team, Jean Monnet team, Konrad Adenauer team and Altiero Spinelli team.

The treasure hunt began! Like magic the doors of libraries were open for them to find the clues about their team leaders, about their visions and great work, about their influence and steadfastness, about the history they made.

Colourful notes were given direction for the four stations they had to find throughout the whole building. Imagine all the running and laughing that would bring out different professors from their classes to see what’s the noise all about :-)!

1) Library station: where the kids were guided to research information on their great team leader.

2) Interview station: the kids were given recorders and let loose in the courtyard of the faculty to interview whoever they met on the topic of the day: Europe Day!

3) Transcript station: the kids were given a piece of interview to listen to in the headphones and to transcribe what they heard. They realized how hard the job is!

4) Video station: where they watched a short video on how EU works.

The activity ended in the beautiful aula, with the puzzle to make about the story of EU and a map of Europe tocomplete with the flags of the EU member countries.

So, this is all about in Schuman for kids: it’s about war, blood and tears, knowing we mould the future history makers, but it’s also about fun and great imagination.

You are welcome any time to join! Thank you!

Last Friday was Epiphany, the day on the Church calendar marking the visit of the…