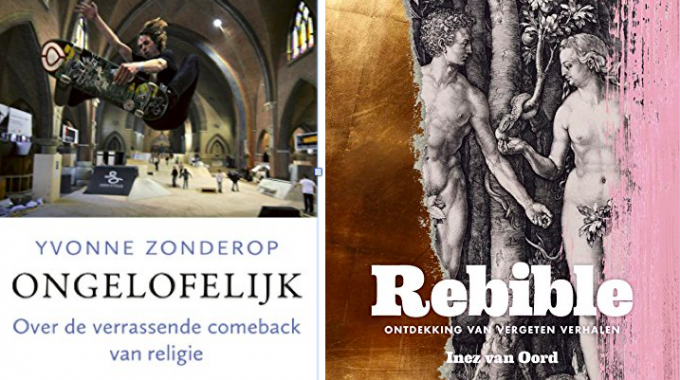 An article from Jeff Fountain for Vista Magazine.

Two swallows don’t make asummer, says the proverb. Yet two recent Dutch books about reflection on roots could perhaps signal a significant climate change in Europe concerning interest in the Bible and Christianity.

One is written by Inez van Oord, the publisher of Happinez, a very successful New Age glossy magazine offering happiness through a range of eastern spiritualities. In her book Rebible (2017), she surprised her readers by saying that ‘in recent years we have embraced Buddha like a teddy bear, read spiritual gurus and visited ashrams and monasteries in India, and eventually you ask yourself: what are my roots, where do I come from? That is actually Christianity. We have been born on Christian ground. I have let the years go by, but I found the time ripe to explore Christian spirituality. The nice thing is: we can do that again. It’s okay to talk about Moses. You want to know who you are. Who knows? Perhaps it’s more familiar to return to Christianity. That has rooted my youth, that’s where I came from. So the question is: what can I do with it?’

Our true identity needs to be found in our roots, says van Oord. Which doesn’t mean returning to the stultifying legalism of yesterday’s church, she argues, but rather drawing fresh inspiration from the ancient wells of scripture. Inez (hence the title ‘Happinez’) took a journey of personal discovery through the Sinai wilderness with her theologian brother in pursuit of such inspiration. Rebible was the result.

Van Oord’s ability to ‘feel trends’ earlier than most enabled her to start several publications widely resonating with readers. If she is right in her intuition, we may well be entering a season where the spiritual emptiness of our secular age will prompt more to reflect on their spiritual roots.

That this new sound comes from a leading spokesperson for the New Age movement is surprising enough. But a second and more broad-ranging book published recently comes from a former editor of a national left-wing newspaper who now believes Dutch society threw the baby out with the bathwater some four or five decades ago.

In her book Ongelofelijk (‘Unbelievable’, 2018), Yvonne Zonderop describes her sense of liberation as a young woman after leaving the Catholic church in disgust, along with other members of her generation. During the sixties and seventies, faith disappeared behind the front door, she writes. Secular became the norm. Freedom, individualism and autonomy became the celebrated values.

Yet, Zonderop now realises, this personal liberation has had great social consequences. Something important has been lost. Her generation has raised a whole new generation without Christian roots, which for centuries had nurtured and formed western culture and morality. A common foundation for society has been eroded. Who knows what the Exodus meant? she asks. Who can explain the biblical scenarios Rembrandt painted? And who realises that without Christianity we most probably would not have a democratic constitutional state?

After decades, Zonderop has come to see that her generation had robbed themselves of the cultural context in which they had grown up. Yet now it is becoming obvious that the alternatives to religion for offering meaning and values are scarce. Millions of Dutch people continue to waver between faith and unbelief. In politics, the Christian heritage keeps resurfacing, she observes, because it is the source of our culture, democracy and ethics.

She quotes a doctoral candidate from the University of Amsterdam who researched individualisation as the motto for Dutch education after World War Two. Observing that baby boomers valued individuality, he concluded: ‘but, woe to you if you did not wear jeans or did not criticise religion!’

Which recalls for Zonderop a comicscene from Monty Python’s Life of Brianfilm in which the Messiah figure tells his crowd of followers that they are all individuals, they are all different; to which the crowd responds by chanting inunison: ‘Yes, we’re all different!’ Then a lone voice pipes up: ‘I’m not.’

Zonderop now views the ideal of individual freedom as having held Dutch society in a strong grip, of which the collective departure from the church is just one example. But freedom has now become a devil’s dilemma: when you make a mistake, you’re on your own. Today’s youth, she argues, seek the support circle of friends to fall back on. Social capital is more important to them than individual freedom. Religion can become a source of meaning for them again.

The loss of togetherness is more broadly felt in society these days, writes Zonderop. People miss the social cohesion formerly offered by trade unions and churches. They miss the ‘vertical dimension’, where someone higher than you is looking after your welfare, whether that be a group leader or God.

The book’s subtitle, “About the surprising comeback of religion,” refers to the closing chapters which describe a number of new expressions of church in the Netherlands, and particularly Amsterdam, today. A wave of pioneers is appearing, both within and outside the church, showing rumours of the death of Christianity to have been greatly exaggerated.

From chaos to order

The creed that unites and divides

The opening speech of the director of the Schuman Centre for European Studies, Jeff Fountain,…

'SO FAR, SO GOOD!' SAID THE OPTIMIST as he hurtled towards earth after jumping out…